The hills are alive...

Many apologies to Julie Andrews. As with my bridges, you can never have too much terrain and I noticed that in recent years I have had a great deal of use out of some low profile (0.5" thickness) polystyrene hills I picked on the Bring & Buy at Triples. They just seemed to work better for a lot of games than my older 1" thick hills. Perhaps it is because we are playing games on smaller surfaces these days? Who knows.

Anyway, while clearing out the cellar I cam across some bits of 0.5" polystyrene I'd kept from some packing material so I thought I'd make a few more low profile hills to go with the ones I'd bought. 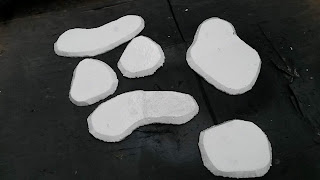 First off I used the existing hills as templates to do this batch. The long thin ones are particularly useful as the sort of ridges so beloved of military manual writers to show how to conduct a covered approach. I cut the sides vertically then chamfered them off into steep slopes. 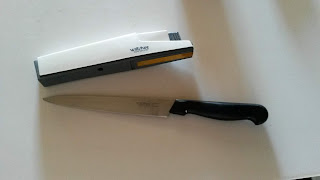 Whilst I am aware of the mysterious 'hot wire cutters' that some people use for this sort of thing, I just use a (very) sharp knife. I've been using this old kitchen knife in a knife sharpening block for modelling projects for years. It is very, very sharp as I sharpen it regularly, it cuts polystyrene without making lots of annoying bobbly bits. 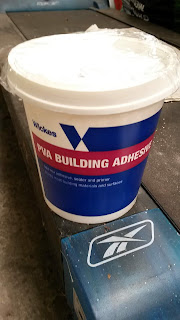 When I was a kid I used to make hills out of polystyrene ceiling tiles, and they inevitably broke to bits over time. So, the next job is to cover the bare polystyrene in a layer of undiluted PVA, which stiffens them up nicely and forms a hard protective coat. 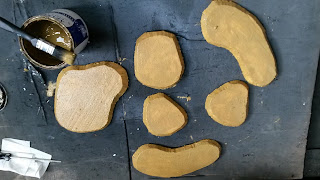 Once the PVA has dried (both top and underside) it is time for a basecoat of household emulsion. 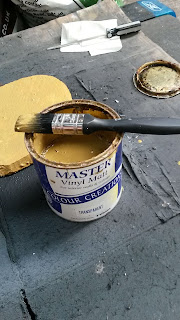 This attractive shade of poo brown is vinyl matt emulsion, mixed up at B&Q to match two of my brown basecloths. 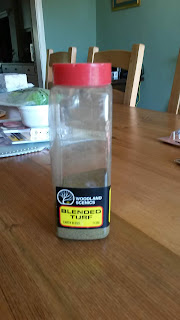 Finally it is time for some flock, this is my trusty old pot of Woodland Scenics blended turf. It has lasted over 15 years so far. 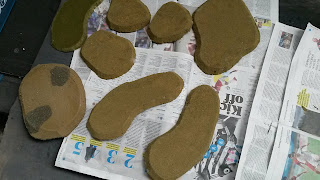 Somewhat bizarrely my nice green flock came out distinctly brown on these hills, perhaps the basecoat is showing through too much? They aren't a bad match for old hills (bottom left) but are a lot browner than the new ones (top left). Oh well. 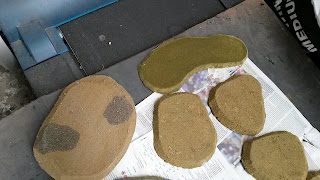 Once they'd dried they are almost exactly the same colour as my old hills covered in builders sand! I might as well have done them in cheap sand rather than expensive flock. It  doesn't really matter though, they look a fair bit greener indoors and are good enough for gaming purposes. Right, that is more terrain done to go in the terrain box.