To greet the New Year, John had dug up an experimental set of Pz8 rules covering that oft occurring military problem - giant space monsters invading earth in the 1950s and 60s.

The alien monster(s) were controlled by the game system, while the humans could select from a range of infantry, MG armed jeeps and the odd tank (in this case, the inevitable M47). 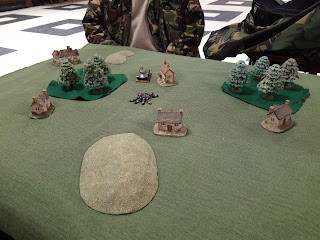 A general view of the battlefield with the spider set up in the centre in a rather rural setting. So less The Creature Which Ate Sheboygan, and rather more The Creature which visited Ambridge. 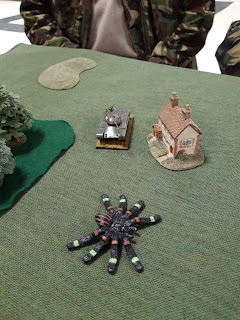 The spider parked next to Johns Roskopf M47 to give an idea of scale. It is a very big spider. Our jeep swarm roared on from one side of the table, supported by the tank. Movement used an AK47 style random movement system. Jeeps were quite fast. 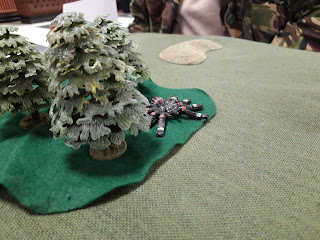 The spider responded by taking refuge in the wood. The spiders movements were dice controlled, with minuses if it was wounded, and pluses if there were human units within 6". Higher scores resulted on more aggressive moves, lower scores in more timid ones (generally moving away for the nearest humans) 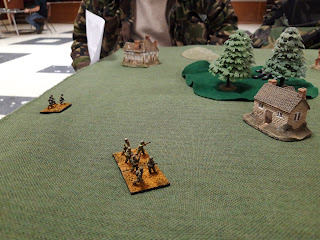 Over on the other side, our footsloggers cam marching on to cut off its retreat. We would win by eithe rkilling the spider or preventing it exiting the table. As it was quite capable of simply running away, it was important to surround it. 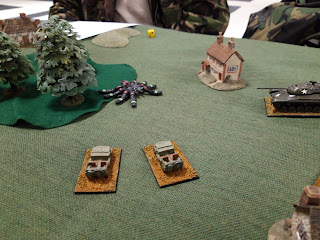 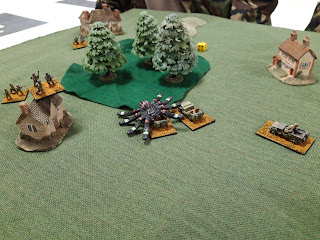 Unfortunately the jeeps got a bit too close, and one vehicle got eaten as the spider jumped forward.  (The spider kept dodging back into the wood and getting close was the only way to spot it. 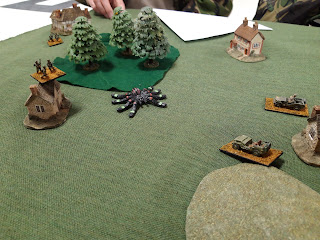 The survivors fell back (when a human unit was killed, the rest had to take a 50:50 morale throw). 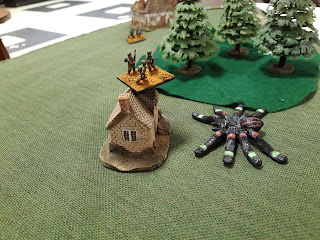 The spider then turned its attention to the infantry cowering in this rustic cottage. 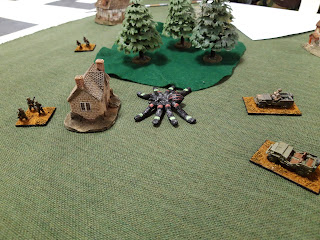 The infantry also decided prudence was wise, but as the spider was distracted, the jeeps sneaked up behind it. 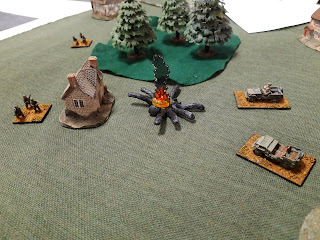 And finally poured enough .50 cal fire into it to finish it off. Everyone knows space spiders explode when they die.

That was hilariously good fun, so much fun that we played it two more times with different force mixes. We discovered that mixed jeep/infantry teams didn't work so well on the last playthrough and sadly the human race was doomed as the spider defeated us, which at least proves than game wasn't completely one sided.

Possibly appearing at a well known  gaming weekend near you in the future.