John put on another WW2 Air game in the Pacific, this time based on the assassination of Admiral Yamamoto, Operation Vengence.

Following intel from Ultra decrypts, specially adapted P-38 Lightnings made a 600 mile flight from Guadalcanal  to Bougainville. 18 of them provided top cover against the dozens of Zeros based nearby, while four aircraft intercepted Yamamotos flight.

Tim got to represent the Rising Sun, while I got the Americans. 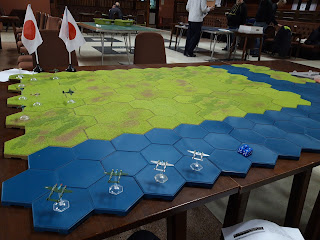 The general area of operations. Bougainville is the great big island in front, and the P-38s are coming in at low altitude under the radar over the sea. 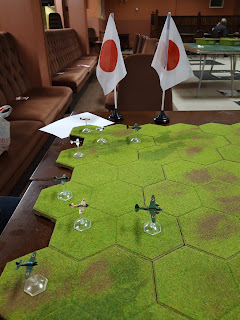 Yamamotos flight was two Bettys escorted by half a dozen Zeros. Tim brought the Japanese flags, so he got to play Japan. 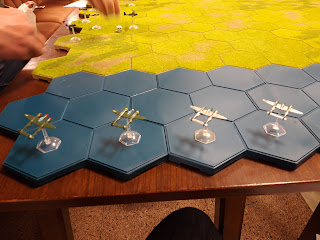 I had two green P-38s and two silver ones. 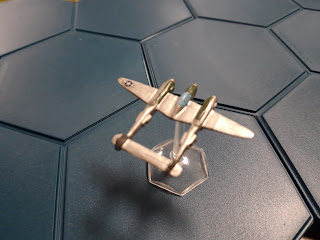 I do like a Lightening In Pz8 air combat, these are pretty good planes, fast, heavily armed and with an excellent ceiling. It is just a shame they are outnumberd 2:1! 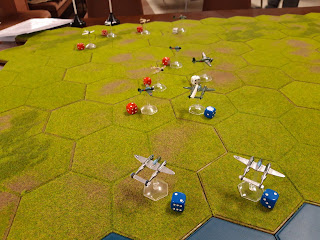 Most of my flight held back, gainig altitiude and looking to get on the tials of the Japanese planes. One spotted an opening and dashed for the nearest Betty at full throttle,  but sadly missed its deflection shot and in turn was shot up and demaged bv a swarm of Zeros. 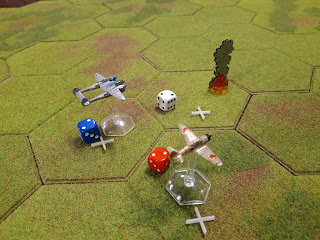 Its wingmate made no such mistake and managed to trail the Betty and down it in a single pass. First blood to the US. 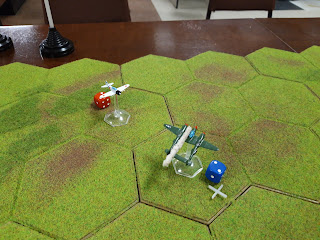 Things weren't going so well in other area as another P38 was damaged.... 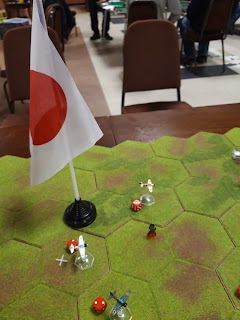 Then downed by more Zeros. Tim decided to mark the occasion in typically restrained fashion. 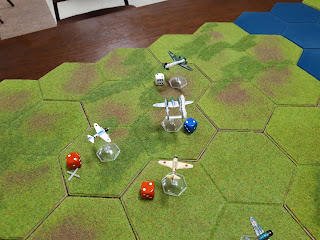 One of my other P-38s managed to push through the the fighter screen and make an attack in the second Betty, which it damaged. In turn the Lightning was damaged in a hail of air-air gunnery. 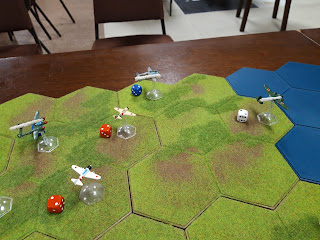 Two of my damaged planes set off in pursuit of the damaged bomber. Even thought they were damaged, they had a speed advantage and closed in steadily. 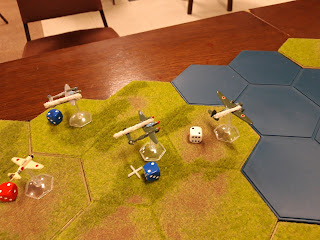 One even managed to get on the Bettys' tail. 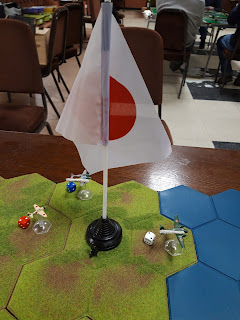 But sadly missed, and was in turn shot down. This loss was marked in the traditional manner. 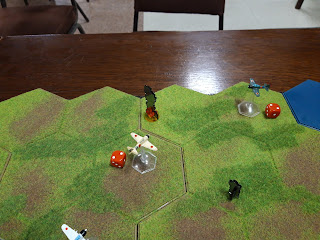 To add insult to injury, a third P-38 went down. 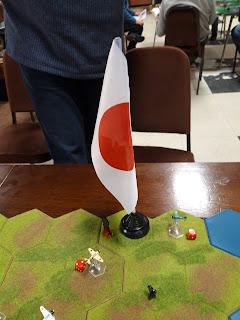 Yet another big flag. 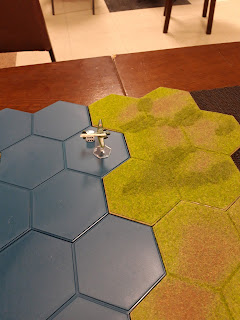 So that last Betty escaped and limped over to the airfield on the Island, while my one (damaged) P-38 headed for home, 400 miles away.

Ah well, in real life the US only lost one P-38, although all the others which returned were damaged, the worst with over 100 holes in it. They also shot down both bombers, although Yamamotos Chief of Staff in the second plane survived the crash.

Happily for freedom and democracy, it turned out that we'd downed the unfortunate Admiral in the first bomber over the jungle, so historical verity was restored. I hope he had time to get his sword out, as he did in real life.