I thought it was time to dig out my WW1 Russians, and inspired by Pritt Buttars 'Collision of Empires' I worked up a scenario for Stalluponen. Tim noted that we'd actually already done this twice already, but hey ho, off we go into the breach again.

OP14, my 15mm Russians and Germans on hexon terrain. I'd cleverly managed to bring OP16 instead (which I'd set up to play on squares) so there was a moderate amount of confusion about turning limits, but we'd played enough OP14 to figure it out. 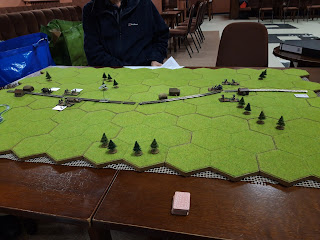 View from the north, Russans entering from the left, Germans from the right. 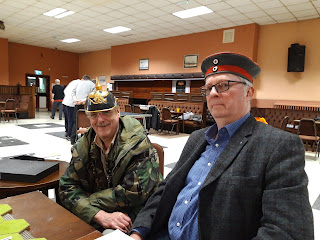 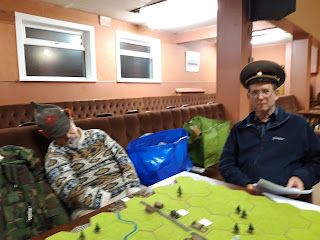 Rennenkampfs Russians demonstrating their professionalism. Tim C, and Jerry doing his Kutusov impersonation. Tim is resplendant in my carefully converted Tsarist cap complete with Tsarist enamel badge glued on with blu tak over the hammer and sickle. 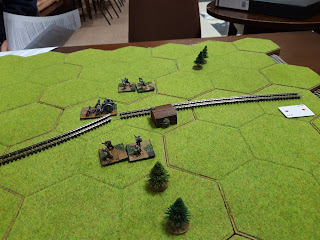 Von Francois' advance guard. I decided to use two base Brigades for this to avoid too much congestion as four 15mm bases in a hex takes up a lot of space. 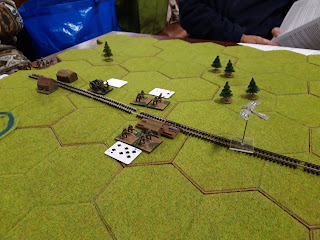 The Russians advance guard was handicapped by poor C3 and logistics, a run of clubs and spades causing them to dither in position around the railway station. 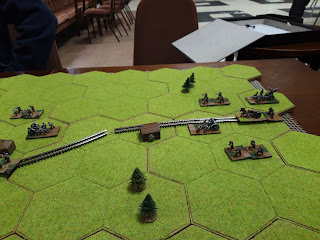 The rest of Francois' Corps hurried to the front. 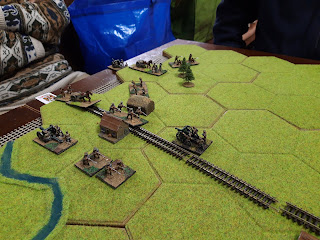 While hordes of Russians began to roll on. 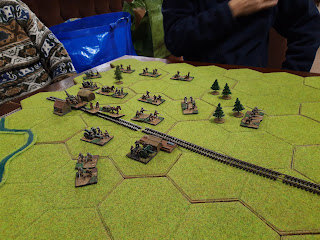 The Russian steamroller was really quite impressive. Two entire Corps. 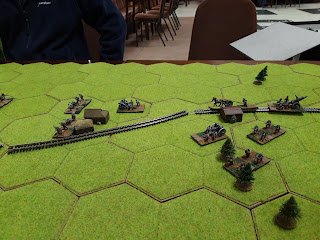 The German advance guard deployed around Stalluponen while the rest of the Corps hurried up. 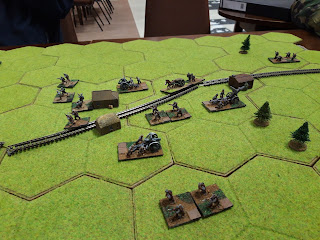 The second division moved up to cover the northern flank. Abteilung Frank now made an appearance from the southwest. 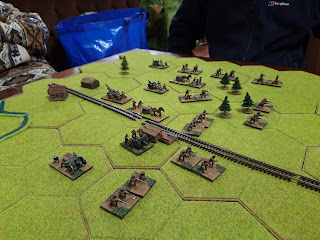 The leading Russian Corps began to deploy around the railway line, while the second started moving ominously fast towards the southern flank. Those pesky woods rather got in the way. 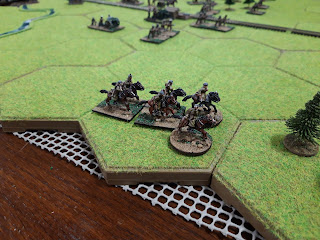 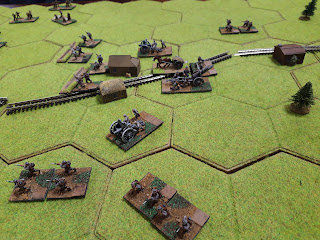 This caused much excitement among the Germans who hurriedly unlimbered their artillery. Meanwhile the troops around the town had dug some rudimentary trenches. And so it starts. 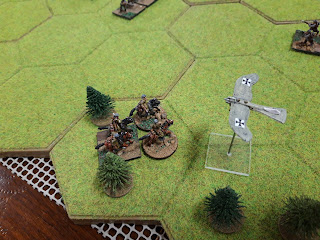 16 Flieger Abteilung located the cavalry among the woods and the German field guns laid down a devastating barrage against the marching columns of horsemen. 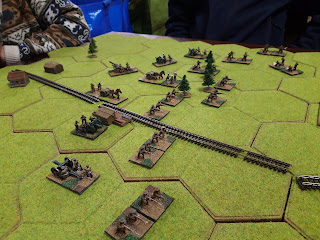 The first Russians Corps was by now fully deployed but remained in place, fixing the Germans in position. 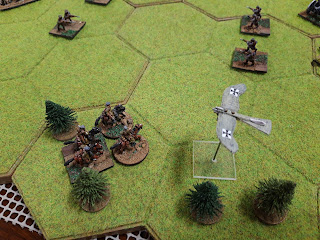 The German aircraft continued to hover over the Russian cavalry. 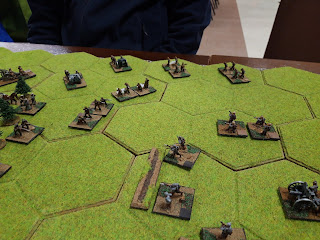 The Russians began to outflank Stalluponnen from the south as Franks brigade moved up. Again, the German artillery inflicted losses on the Russians as they began to deploy. 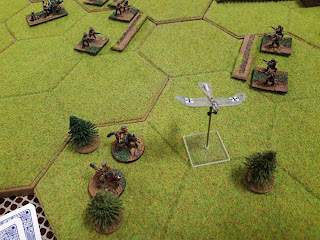 The Russian cavalry were quite thin on the ground now and at 50% strength any offensive potential was lost. A fairly typical first outing for a unit! They dispersed into a skirmish screen and took no more useful part in the battle. 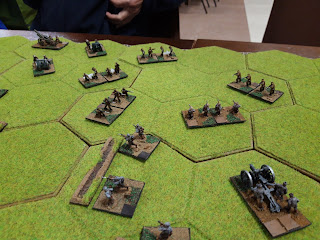 Franks brigade was assaulted in the open by an entire Russian division while both sides artillery boomed out. Outnumbered and unable to deploy their MGs, they were driven back by the Russians. 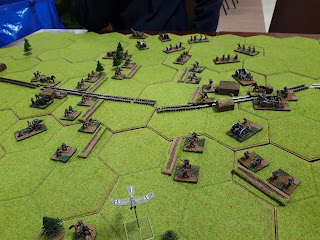 The general situation. Lots of trenches were now appearing along the front. So much for mobile warfare! 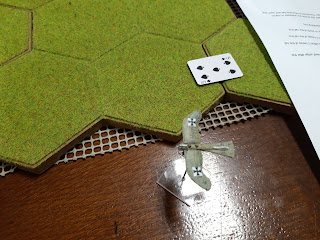 After its early success, the German airforce was now grounded by a series of black cards. 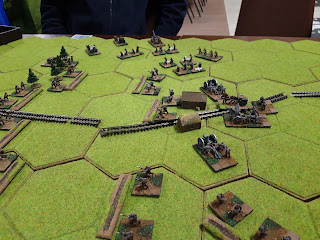 It all now hung on the action in the south. 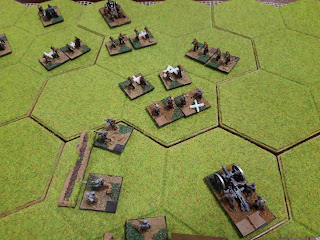 Abt Frank counterattacked, supported by the divisional and corps artillery. They took some losses but inflicted enough casualties on the Russians to overrun their lead brigade. 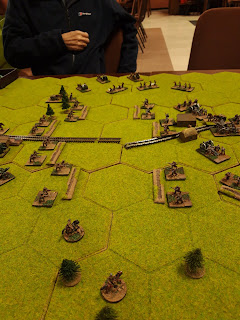 The cumulative losses broke the Russian Corps (it had lost half its infantry strength by now) and the Russian attack ground to a halt as night fell. 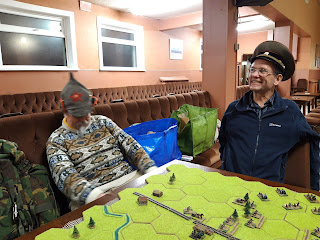 Jerry apparently never woke up from his nap, but his Corps was holding the front as ordered!

The Germans had come out rather better in terms of loss ratios (approx 10,000 Russian vs 2,000 Germans) and the Russian advance was halted, so they won this round. That was broadly in line with the historical experience as Rennenkampf somehow managed to fumble his massive numeric advantage (20 divisions in eight Corps vs just two Prussian divisions!) to be defeated in detail.

Historically Francois's impetuous advance and success against Rennenkampf  prompted the Germans to try their luck again at Gummbingen, with rather more unfortunate results for Germany.

As ever a good outing with OP14, and it was nice to give the Russians a taste of battle.  Seven and a half divisions engaged, resolved in an hour and a half.