John put on another eighteenth century game using his squared version of Brown Bess, this time incorporating a more significant wheeling penalty for units in line. The battle itself is one a bit less gamed as Marechal de Saxe had built a fortified position with a series of artillery redoubts echeloned behind the fortified village of Fontenoy. The Pragamatic Army (English, Dutch and Imperial) were faced with attacking this position, which was somewhat reminiscent of the German defences at Passcheandale.

Again my failing memory means I can't recall exactly who was who although Jerry was Louis XV, someone was De Saxe (possibly Pete?) and I was the Duke of Cumberland, third son of King George (Hurrah!). Tim G was the French cavalry, Simon the Dutch infantry and Tim C the Allied cavalry. My personal objective was to lead my troops from the front. Well how hard could that be? 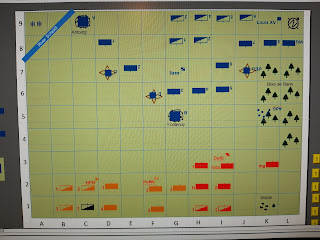 The initial deployment. John had done a lot of work on his Powerpoint objects and icons and the whole setup looked very pretty. We gave out orders and John moved the units around on the screen and adjudicated the combat results.
As you can see from the image, the French infantry and cavalry are very easy to make out at the top of the screen and the Dutch, British and Austrians are all nicely colour coordinated at the bottom. 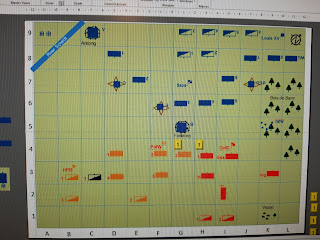 Given the way the French were arrayed I thought out best bet was to march forward in a single consolidated line, chewing up the piecemeal French redoubts and units. We therefore marched straight up to Fontenoy, while the reserve units deployed behind. The right flank unit (Ingoldsbys briagde) seemed curiously reluctant to move forward against the French skirmishers in the woods so I sent a brigade to reinforce them.
Our chaps in front of Fontenoy took some defensive fire losses but then opened withering musketry from three squares against the French. 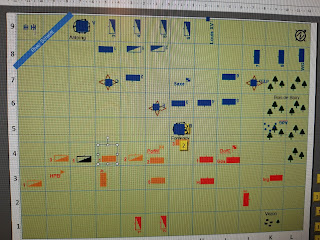 Our left flank was looking pretty good as the cavalry moved into position but the Dutch decided to launch an assault on the French defenders in Fontenoy. This was rather premature as the attacking unit was seriously disadvantaged against the fortified town and it threw away our numerical superiority as only a single unit could melee (whereas we could all shoot). 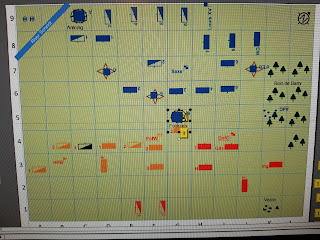 The French reserves also did some shuffling around. The wheeling penalty made this quite slow for infantry units. Their cavalry also got hung up in a bit of a traffic jam against their own fortifications and the River Scheldt. They tried to throw a lot of weight onto their right. 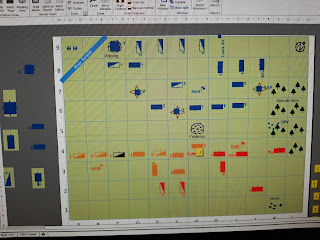 The Dutch retired from Fontenoy and the remaining French garrison was shot out of the town by the British and Dutch brigades on each side. It turned out one of the Duch objectives was to launch a hasty assault on the town, which they had done, and not too much damage done to us. Ingoldsby had also finally moved up into the woods (he'd just needed a bit of encouragement) on our right. 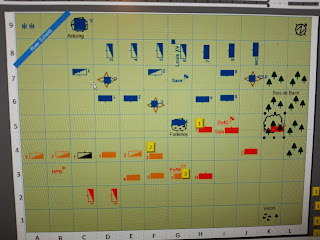 Things suddenly hotted up. Ingoldsby managed to not just push back the French lights, but to wipe them out. The French were hideously unlucky in this case as normally light infantry can just fall back before formed troops. Cumberland stepped forward another row of squares, but the perfidious French re-occupied Fontenoy. What a rotten trick! The British infantry were now next to some French infantry though, and with 'superior' infantry and a General vs 'raw' infantry it was only going to go one way...
The French cavalry were meanwhile performing no end of strange manouvres to be able to deploy, and their whole cavalry line sort of sidestepped one row south as the French infantry scattered in front of them. 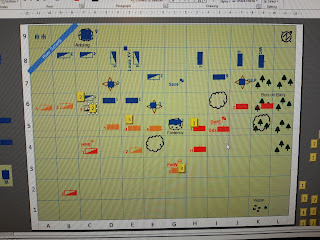 The left flank eventually erupted into a scrappy cavalry melee, which had been building up for some time. The Dutch infantry moved up in support against the next French line and Cumberlands men easily blew away the French infantry in front of them (I was being careful to stop and reorder the line after each firefight).   The defenders of Fontenoy were looking increasingly isolated, while the French infantry reserves about faced and marched back in the opposite direction to face the British. Proper Duke of York stuff. 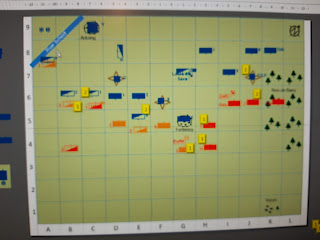 The caavlry melee continued as both sides fed in fresh units to replace those damaged or routed. The French were having the worst of it though. Fontenoy was now almost surrounded. Cumberland meanwhile straightened his line and poured musketry into the French inits in front. 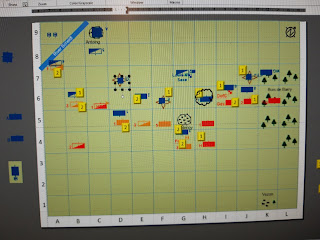 The French left was now looking quite ragged, and in a surprise move the defenders of Fontenoy sallied forth into a hail of musketry. Over on the right the French concentrated their fire on Cumberland and the Guard Brigade, and only the Generals presence keep the Guards from breaking (and he also survived several leader risk rolls). The crisis of the battle had arrived. 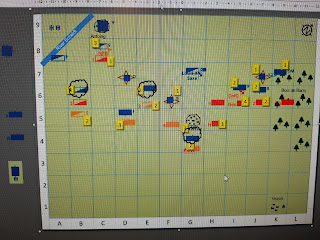 A number of units on the French left broke (the cloud symbols), and the Fontenoy garrison was also routed. The Hanoverian brigade moved up to support Cumberland whose line was buckling under a furious French assault, but there were now four British brigades in a close supporting line. 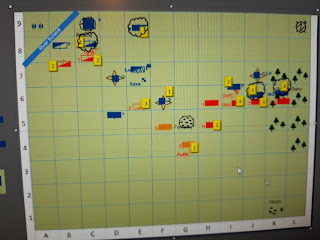 The French Army finally collapsed as the British cavalry pursued to the banks of the Scheldt, Fontenoy was cleared and the remaining French brigades facing Cumberland also disintegrated.
Phew! that was a close run thing, and a somewhat better result than Cumberland achieved in real life.
That went really well, and the simple restriction on wheeling made the game feel a lot more linear than Dettingen. Fontenoy is actually covered in the One Hour Wargames scenarios as the 'Fortified Defence' scenario, the play balance approach in that scenario is that the attackers get to replace their entire Army with fresh units once per game (!). So I think the Pragmatic Army did quite well to successfully assault such a strong position. irl Cumberland pushed fairly deep into the French position, but surrounded on all sides by French artillery redoubts, decided to save his army and withdrew again.
In the game, the French cavalry could have intervened earlier if their deployment had been prioritised by having them to interpenetrate and disrupt their supporting guns and infantry, but by the time they did get into action, the French first line had largely been destroyed. The personal objectives and unit specific (secret) rules added a lot to the flavour of the scenario and worked very well, although I'd convinced myself that Cumberland was killed in this battle,  in fact he survived and went on to defeat the Jacobite uprising later the same year. Well you learn something new every day.
The only real rules discussion we had was around our old friend - the treatment of diagonals. There were some odd instances of diagonal firing (which is fine) apparently through obstacles and friendly units, which isn't really. It partly depends how you visualise the units in the squares as to what is logical and what isn't. It is just one of those things when using grids unfortunately.