Simon, Jerry and I have all recently purchased Bobs latest book - a reprint of his 'Arriba Espana' rules, which also include his SCW rules based on the Portable Wargame along with several scenarios.  Simon was first off the mark in putting a game on, which we played using the vanilla published rules and one of the scenarios on a square grid. We used his 20mm SCW collection for this.

Tim G, Tim C and I were the defenders of the Republic, while John and Jerry were the wicked Nationalists. The scenario was based on the Siege of Toledo. A small Nationalist force is holed up in a monastry on a hilltop, surrounded by a motley collection of Republicans, with a relief force from the Army of Africa on the way. 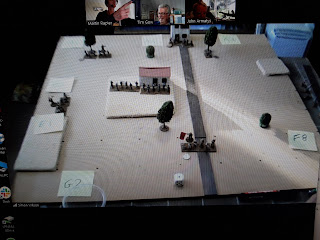 The Nationalists started with a unit of Falangists and a unit of Civil Guards. The units roughly equate to battalions. The Republicans had two units of Anarchists (commanded by Tim G), two Socialist units (one infantry, one MG commanded by Tim C) a unit of Communists plus an Anarchist overall CO (both played by me).
The Nationalists are all reasonably well disciplined, but the Republicans require dice rolls of varying difficulties to activate depending on the political allegiences of the units compared to the commander. The Communists weren't keen at all, the Socialists were so:so while the Anarchists were up for it. So our 'plan' was to put the surly Communists to block the road south, the dilatory socialists to operate in support from the northeast, while the keen anarchists would lead the attack from the west shot in by the socialist MG unit. 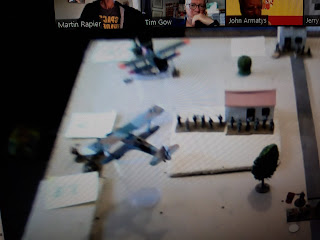 The game opened with air attacks from both sides. The air support mechanism is based on that in Arriba Espana, with the likelihood of getting (and keeping air support) based on time period and which side you are. In 1936 air attacks are fairly rubbish, which didn't stop the Nationalists putting two hits on one of the Anarchist units and pinning it. Ouch. Our planes naturally didn't turn up at all although Simon kindly put the model on the table. 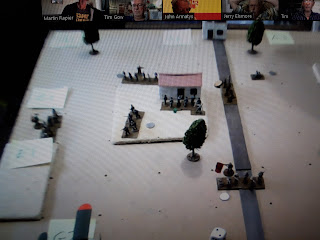 The Nationalists moved their Falangists to cover the west side of the hill having won the initiative. This was followed up with some pretty decent Republican activation rolls as everyone activated apart from the surly Communists (who needed 5+). The pinned Anarchists unpinned themselves, the other Anarchists plus the CO moved up into the dead ground behind the hill while the Socialist MG moved into range and opened a withering fire on the Monastry. Despite the penalties for moving and cover  (6 needed to hit!) the Guardia took a hit and were pinned.
This was followed up by the Socialist infantry marching straight down the road, turning sharp right and mounting an (unsuccessful) assault on the flank of the pinned Guardia. I have to say that this is one aspect of the PW which bothers me a bit - the ease of being able to carry out flanking attacks after a headlong march move followed by a 90 degree change of direction. I would be very minded to introduce some of the restrictions on assaults used in the Neil Thomas rules.
Anyway, as it turned out, the attack was ineffective despite the flank attack bonuses as we'd not noticed the penalty for pinned units in Close Combat (it is explained in the rules on pinning but not included in the lists of combat modifiers). 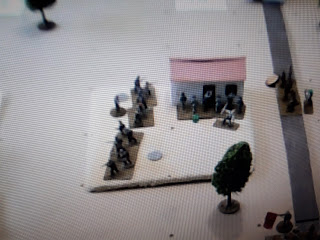 The Anarchists added insult to injury by doing the same thing on the other flank. I'd hoped to pin the Falangists with the other anarchist unit but they failed to activate. Jerry was now in a dire situation - he couldn't unpin as he was adjacent to enemy units, he couldn't initiate an assault as he was pinned, and apparently he couldn't fire as he was adjacent to an enemy although it isn't that clear in the rules. Bob later clarified that adjacent units can shoot at each other, so that was a mistake on my part. 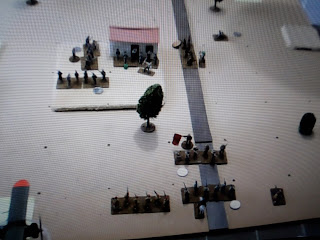 The Falangists duly wheeled and attacked the flank of the Anarchist on the hill. The presence of the anarchist CO gave them a combat bonus so I was able to fend this off. I Meanwhile the Nationalist relief column arrived from the south and duly ran into the Communist roadblock. It didn't matter that they were hard to activate, they worked fine just sat in the way as their ZOC blocked the Nationalists nicely. 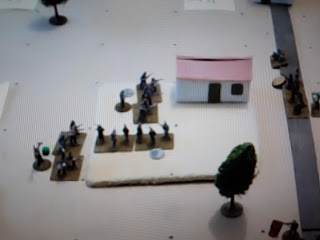 The other Anarchists finally activated and hit the Falangists in the flank. We'd now inflicted enough losses that the defenders on the hill became exhausted, and two further close assaults polished off the Guardia Civil (as they were pinned they couldn't retreat).  The Falangists were unable to move to re-occupy it as it would involve leaving the ZOC of one enemy unit an entering another. 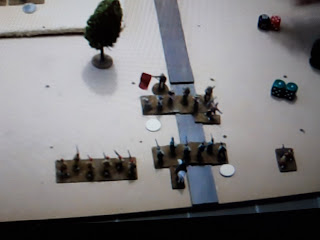 In the south a fairly bloody close combat was underway (both sides rolled a 1, which in PW SCW is bad). It didn't really matter though as things were almost over on the hill. 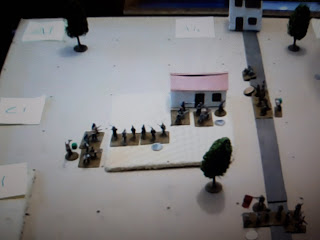 The only thing which could go wrong now was the Anarchists failing to activate. Anything but a 1.... but they managed it and the buildings duly fell. Victory to the good guys for once.
That rattled along at a fair old pace and we finished up in just over an hour. We had a fair amount of discussion afterwards about how it worked as game. I liked the faction activation, and I can't see any reason why it couldn't also be used for Nationalist units who suffered all sorts of factional infighting of their own. As with other PW games, the exhaustion mechanisms and rather gentle combat system also worked well.
Some of the mechanism are a bit random and brutal though, and I'm sure they work fine for solo play or short linked scenario campaigns, but perhaps aren't so good for our once per week multi-player gaming session as some players were left with nothing to do and no way to influence the outcome. We had the same problem with some of the Neil Thomas rules, but it is easy enough to tweak simple rule sets to work better for multi player.
A couple of simple suggestions were to allow units adjacent to enemy to try and rally using the existing hit table, and another was to be a bit more generous with the firing arcs. A 45 degree arc may be appropriate for close order musketry, but perhaps not for dispersed twentieth century units armed with automatic weapons. We will give it another go with a few tweaks, and I'd particularly like to try out one of the multi-game scenarios included in the book.