After the exciting outing a couple of weeks ago, I fancied another trip to the Central Front in 1981. Away from poor old 4th Armoured Divs vain attempts to hold up 3rd Shock Army, the action switched back to the Braunchsweig area as 34th Panzer Brigade, fresh from its shattering victory as reported here on Megablitz and More: Counterattack pressed on to relieve the defenders of the city.


General Briefing
As night draws close, 3rd Shock Army is pressing on west towards the Wesel driving 4th AD before it, but south of Braunschweig, 34th Panzer Brigade has overrun an NVA Motor Rifle regiment and is poised to both open up a corridor to the defenders of the city and cut off 12th and 47th GTD.


German briefing
34th Panzer Brigade has succeeded in breaking through the enemy defensive crust towards Braunschweig. We need to hold a corridor open to the city up the plain between Wolfenbuttel and the Mitelland canal extension.


The brigade has not stopped to rearm as speed is vital, damaged vehicles have been abandoned and losses have been absorbed by reorganising the brigade on the march into three full battalions. The troops encountered earlier today were NVA, who put up a reasonable fight but were equipped with outdated equipment.


The enemy is likely to respond vigorously to this threat with reserve forces.


The Luftwaffe has laid on as much air support as possible, but given the strength of enemy air forces, ground support is likely to be intermittant at best.


Open up and hold a corridor open to Braunchsweig.

Warpac briefing
14th Motor Schutzen Regiment to the southwest was overrun by enemy tanks this afternoon, it is vital that the enemy does not link up with the defenders in Braunchsweig as this will both enable them to resupply  and risks cutting off our forces to the west.


Division has committed all our armoured reserves to stop this enemy attack, they will jump off from their current assembly area SE of Braunchsweig. The enemy panzer forces have not stopped to reorganise after their attack, so our move will catch them in a depleted state. No air support is available as our main effort is further west.


Prevent the enemy opening up and holding a corridor to Braunchsweig.
Neutralise the enemy panzer force.

John A and Tim C took on the forces of righteous capitalism while Tim G and Jerry A were once more the steely eyed defenders of socialism. As ever, played with my 2mm toys on Hexon terrain and using NATO Brigade Commander. 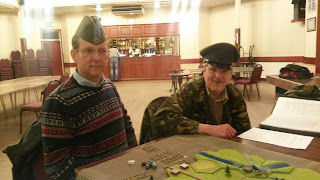 The Bundeswehr looking eager.Never before had they had so many tanks to play with! Two panzer battalions with Leopards and a mechanised battalion in Marders. 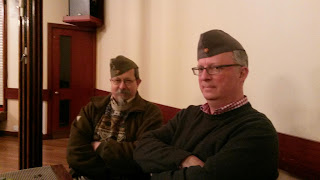 The wicked National Volksarmee, looking determined, which really is the only thing you can do when commanding a Cat III Tank Regiment equipped wiith T55s.... 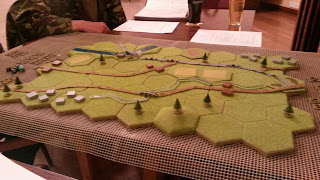 The battlefield from the northeast. Braunschweig is off to the right, Wolfenbubuttel to the left and in the far distance the Mitelland Canal extension and autobahn bridge guarded by some Soviet engineers who have just spend all afternoon repairing it.. 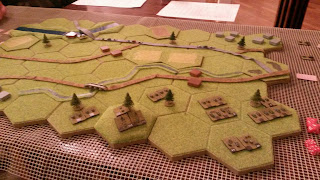 The NVA Tank Regiment in its assembly area. Although most of the regiment had T55s, the divisional Independant Tank Battalion had some shiny new T-72s. The vehicles visible on the Autobahn are abandoned civilian transport. 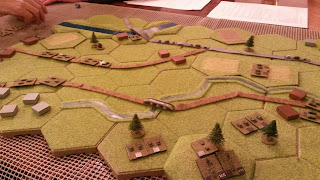 On come the West Germans, two panzer battalions in road column. This juicy target was promptly shot  up a battalion of T55s who managed to hit some Luchs leading the central column. 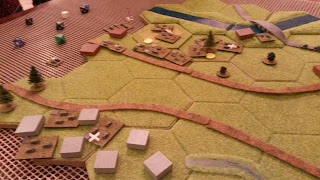 Sadly things didn't improve for the Bundeswehr. The T55s managed to hit some of the Leopards and a storm of artillery fire from the NVA towed 122mm battalion firing over open sights drove back first the panzer battalion in the centre, and then the leading elements of the panzergrenadier battalion. The disorganised panzer battalion was engaged with RPGs by the bridge engineers, while the other battalion sorted itself out in Wolfenbuttel. 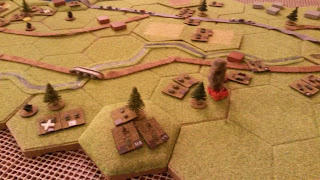 Meanwhile the NVA had pushed forward to occupy woods and villages across the line of advance. NATO artillery and airstrikes inflicted some losses, but the NVA held their ground. The deadly artillery battalion is in the centre of the picture. 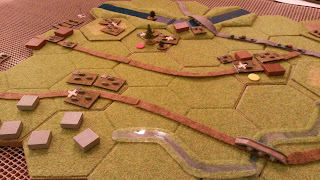 Sadly the NATO misfortunes continued as the panzer battalion in the woods was comprehensively shelled and attacked by Soviet engineers, and the panzer grenadiers broke under close range fire from the T72s. At this point, having lost over a battalion and with their forces in disarray, the Bundeswehr gave up and pulled back. 'Foward defence' had proved to be an extremely costly doctrine indeed.

After their stellar performance in the breakthrough, it was surprising how quickly the attack collapsed. I fully expected the NVA tank regiment to go the way of its predecessor and be completely destroyed, but the BW were appallingly unlucky. I'm never seen so many morale throws failed, while at the same time they were unfortunate in the card draws so it became much more an attack-defence and less the encounter battle I'd hoped. The NVA ran a very solid defence, their key tactical choice being to deploy their artillery for direct fire, and while NATO artillery and air did eventually arrive to quell the threat, the damage was already done.