We haven't seen any of my 20mm toys for a bit, so here is another one. This old veteran was converted from an Airfix Panzer IV some time in the mid 1970s. I used to have two but only one seems to have survived. I've always had a soft spot for the Jagdpanzer IV, and I've still got the Bellona print on it, but I think the conversion was based on one of Gerald Scarboroughs never ending series of articles on how to cut up your Airfix kits. 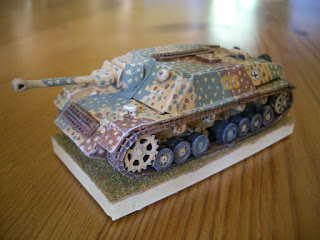 The hull is all made up from plasticard, the gun mounting was carved from balsa and filled with milliput, while the gun is re-used from the original model to make up the L48 version of the Jadgpanzer IV. When I retrieved it a few years ago for a repaint before assigning it to one of my Megablitz divisions, I noticed one of the road wheels was missing. Battle damage no doubt. I'd not done a massively good job converting the ball mount for the MG, but hey, I was only 13 and no doubt in a hurry. 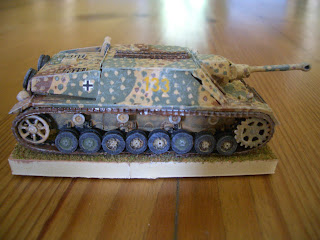 The Airfix Panzer IV always suffered from overlong tracks, these have been cut down and stapled together. They are still fractionally too long, but fit much better than the originals. I was always very pleased with these conversions, and from the side they sit quite like their real life counterparts. A slight gap in the hull is evident here, again no doubt youthful haste (and cutting all those angle shapes was really had), or maybe poor quality welding. 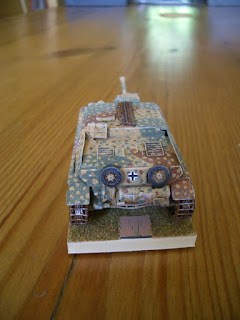 Rear view, nothing very exciting here. The original paint job was just green and brown disruptive over dunkelgelb, but the Bellona had some pictures of them in ambush, so when I repainted this model I had a go at the ambush scheme. Again, just green and brown over dunkelgelb, but with contrasting dots of green, brown and dunkelgelb. I went heavy on the green as one of the colour plates was an interesting scheme from the Reichswald battles with almost entirely green and dunkelgelb (but still ambush pattern).

I went with very plain markings (just three balkan crosses) as by 1944/45 the massive production and consumption of German AFVs meant much of the early war heraldry had gone .

I'm glad to have resurrected this model, but I do wonder what happened to its partner. Oh well, lost along the way somewhere I guess.