John brought down a game of Neil Thomas's Napoleonic rules from Introduction to Wargaming. We've not played these for a while, more focussing on One Hour Wargames and Simplicity in Practice. It was a fictional bash between some French and Russians, and featured Johns  nice new grass mat, purchased second hand at the club bring and buy.

I got to command the Frenchies, and Tim and Graham got the Russians. 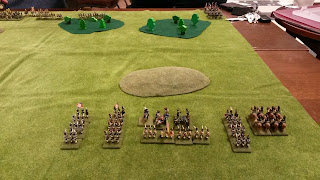 The French right wing, guns supported by the mighty Battenburgers resplendent in their pink and yellow uniforms. 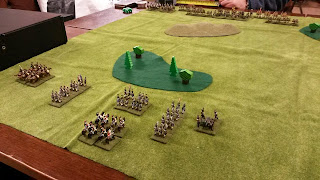 The left wing, more cavalry on this side. There are an awful lot of Russians in the distance! 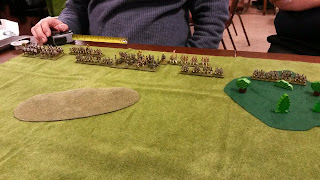 The Russians put most of their strength on their right. Clearly falling into my cunning trap. 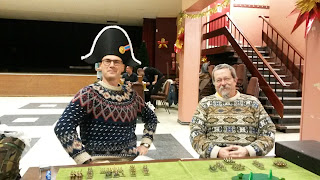 The French sported multi-coloured uniforms and a had much better hats than the Russians. 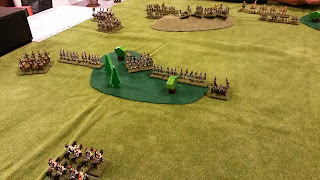 Over on the left I occupied the wood and pushed some cavalry forward while the Russians set up  a grand battery on the hill. 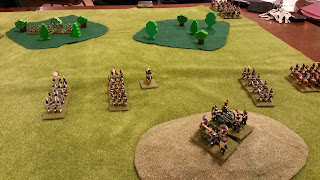 Over on the right, my outflanking columns pushed forwards, covered by artillery. 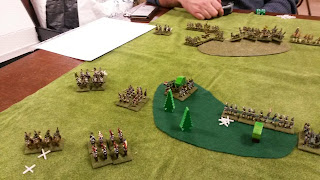 A rather messy cavalry action forced back my Chasseurs and the French infantry formed square. 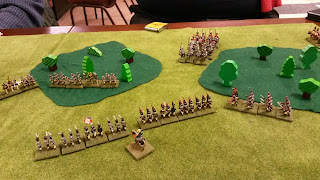 Over on the right, my infantry shook out into line as the Cossacks came over to play, pursued by my Dragoons. 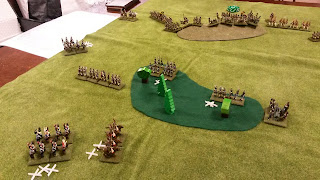 The cavalry melee continued, with neither side able to gain the upper hand. The Russian artillery meanwhile pounded the wood. 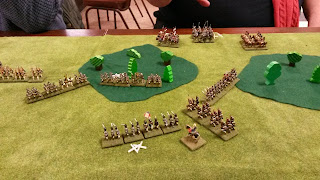 The Dragoons kept the Cossacks busy while the Grenadiers formed up into an assault column. 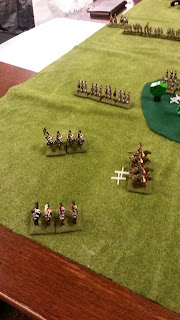 Over on the left, the Russian cuirassiers kept pushing forwards, inflicting heavy losses on the French. 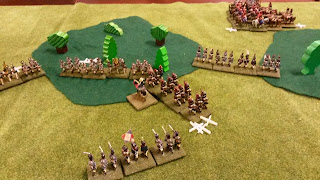 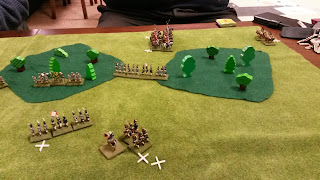 Sadly fortune didn't favour the brave on this occasion and La Garde recule (as did the Dragoons), at which point the French ground to a halt and the honour of Russia was saved. Oh dear.

This was good fun and we had a real laugh, Tim even admitted that was the first NT game he'd actually enjoyed. John had removed some of his earlier revisions and it made it into a cleaner, faster game. It also looked like a proper toy soldier game, and reminded me of the photos in Charles Grants 'Napoleonic Wargames' book.