We were fortunate enough to have the travelling Eric Ravilious exhibition in Sheffield, featuring not only Ravilious but a number of other early twentieth century artists including Paul and John Nash, Enid Marx etc. Ravilious was killed in 1942, one of three war artists to die in the war.

Among the interwar landscapes and beautiful lithographs were a number of war paintings by Ravilious, and I was particularly taken by these three from the Norway campaign. 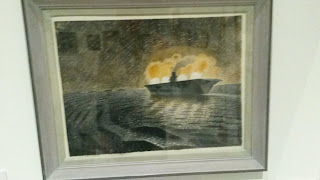 'Ark Royal in Action'. I'm not quite sure what Ark Royal is doing here, apparently setting large bonfires on the decks (or firing heavy AA at dusk), but it is wonderfully stark and evocative painting. 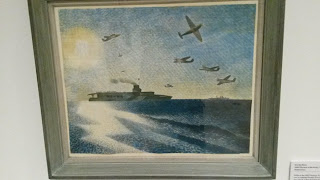 HMS Glorious flying off her Hurricanes under the northern sun. 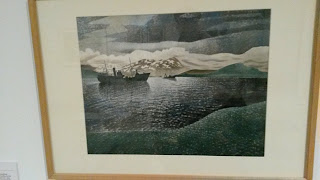 A Norwegian Fiord, which brilliantly captures the colours of the far north.

The exhibition was originally from the Towner Art Gallery in Eastbourne and is at the Compton Gallery in Warwickshire next.  Thoroughly recommended.

Ravilious and Co. The pattern of friendship.