Tom made a welcome reappearance at the club recently, having got a new job which left his Wednesday evenings free. He brought along a set of gladitorial combat rules he'd written for us to try out. Tim, John and me took various heavily armoured chaps, whilst Jerry (ever the rebel) took a pair of lightly armoured but more nimble characters. 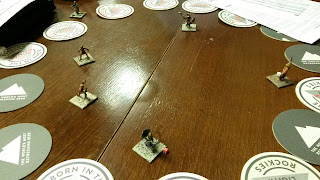 Here we are scattered around the beermat arena. The Emperor can be seen lurking in the distance. My chap has a little red dice next to him. 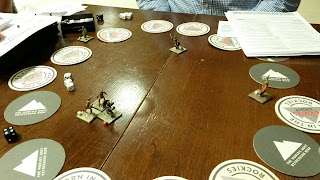 Amongst the various more conventional actions available to our heroes (charge, throw spears etc) are some more entertaining ones such as showboating for the crowd and taunting enemies.  Whilst Tim entertained the plebs with impressive displays of sword whirling, I managed to very successfully taunt one of Jerry's characters who came rushing towards me. This was all very jolly as moving around in all my armour was liable to make me tired, whereas if the enemy came to me... 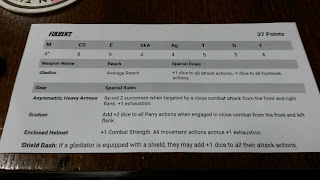 My characters various vital statistics. He was called 'Fulbert' and the various numbers covered things like skill at arms, endurance etc. He also had various special skills, mainly relating to how he used his armour and shield. 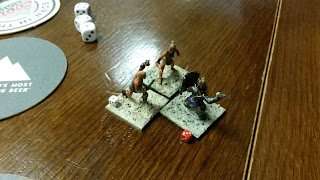 Battle was duly joined and we slugged away. An excellent opportunity to stress test the combat rules as we had a multi-figure engagement and wildly different basic skills, weapons, armour etc. After several rounds of combat with the advantage swinging either way and the crowd cheering, both sides broke off exhausted and it seemed a good time to break for a washup.

It was a good session and most of comments were around streamlining some of the mechanisms and clearing up some ambiguities in the rules. Many thanks to Tom for bringing it down. I'm afraid I don't know what make the figures are, but they were very pretty.