For some time I have been mulling over some basic dissatisfaction with Memoir 44, namely that compared to CnC Napoleonics and Ancients, a lot less 'stuff' happens each turn. This is mainly a function of the card deck, which has a much lower proportion of group activation cards than the later games, which largely reflects its age. Various bloggers had come up with solutions which involved the use of different selections of cards from multiple decks, but sadly replacement decks are no longer available since Days of Wonder were taken over and don't appear to be in the business of actually printing any of the Memoir 44 components any more.

I could have made my own deck of course, but far more rewarding was tracking down the (apparently) last 12 printed copies of the Winter Wars supplement in the entire world to a games shop in Germany, which includes the mighty 'Breakthrough' deck. The Breakthrough deck is somewhat bigger than a standard Memoir 44 deck, and along with more group activation cards, it also modifies the standard cards to allow extra units to move (but not fight).

My shiny new deck duly arrived from Germany, and I mixed in a few extra standard cards as per various suggestions on the internet to generate a 90 card deck. To try it out I picked a fairly straightforward scenario from the desert expansion, 21st Panzer and Ariete vs 1st Free French Brigade and 3rd Indian Motorised Brigade during the battle of Gazala. Jerry took  the Afrika Korps and John the Allies (so he could wear his new RTR beret, Jerry borrowed my DAK cap). We used my 6mm desert stuff on hexon terrain 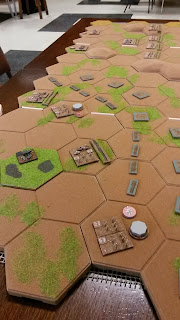 1st FF dug in at Bir Hakeim, wire, mines, bunkers etc. 3rd Indian are visible in the distance. The Bir itself is a supply dump and can regenerate damaged units. The two bunker hexes are also Axis victory hexes. 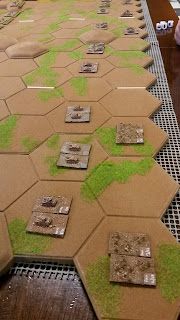 Ariete, M13s and Semovente to the front, dismounted infantry to the rear. Historically they dismounted after coming under artillery fire from 1st FF. 21st Panzer visible in the distance. 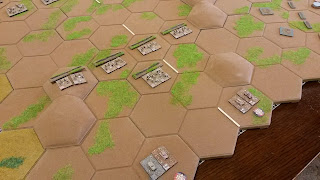 3rd Indian Motorised. I'm not convinced at all by this scenario deployment as historically they were in an actual box, and being a motor brigade had no less than four(!) companies of 2pdrs although they were missing half of them. I left it as-is but added in their field regiment, which in the real battle seems to have done the most damage to the Panzers.

Also unlike real life, the Stuart squadrons of 4th Armoured Brigade are somewhat closer to the front than in real life. It wouldn't be any fun if the British didn't have any tanks though? The Stuarts are sitting on three Axis exit hexes which score them points for units exited. Fair enough as irl the aim was for DAK to outflank Bir Hakeim and tear off around the back of the Gazala LIne. 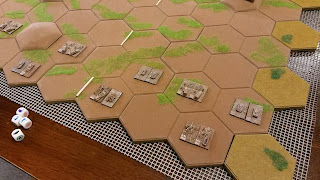 21st Panzer. Motorised infantry, engineers, Pak 38s, various types of tanks (including a company of Mark III specials) and the inevitable 88s. I also gave them some Italian truck mounted 107mm naval guns, because I'd painted them. The 88s and 107s functioned as a heavy AT unit instead of the artillery unit in the standard scenario. 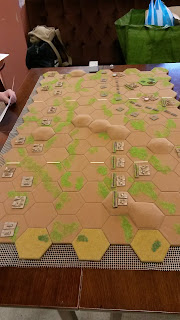 The battlefield from the southern end. The Axis need to make the running in this as the Allies can win simply by sitting in their fortifications and shelling the Germans. The Axis can try and win either by taking Bir Hakeim (which would yield two victory hexes plus four dead units) but is behind two layers of mines and wire. Or they can try and get stuff off the exit hexes by driving round/over 3rd Indian. Rommel decided to do that in the actual battle, and that is what Jerry decided to do here. 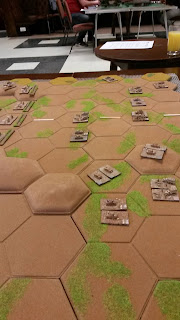 21st Panzer rolls forward in the distance while Ariete side slips into the centre section. The new deck really helped with these manouvres, and there was a lot less of the piecemeal commitment of individual units we'd seen in standard games. 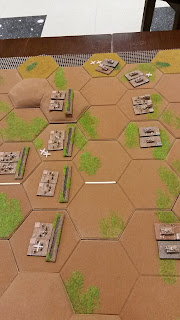 21st Panzer stands off and shells 3rd Indian. The Indians return the favour and a unit of Stuarts engages the Panzers in the far distance. Very wisely Jerry didn't think just running at a load of dug in infantry and guns with tanks without any sort of preparatory fire was a good idea. 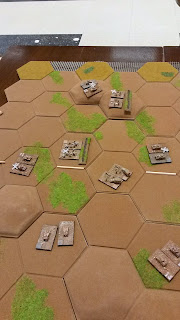 After several turns of shelling, German infantry closely supported by Italian tanks and SP guns assaulted the Indian lines, routing the defenders but sustaining losses themselves. 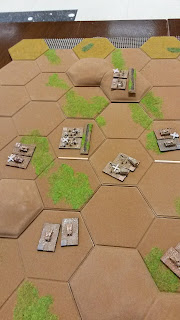 The Indian artillery regiment bravely held the Axis infantry and tanks at bay for a time while the Stuart provided moral support. 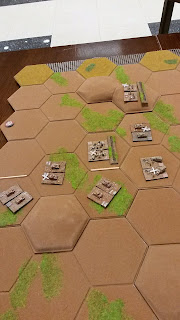 But the Italians and Germans eventually closed in for the kill. 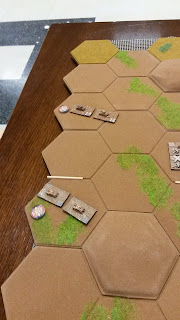 And Ariete rolled off the table to claim victory.

That all went pretty well. The Allies managed to knock a big hole in the Axis armour (as in real life), but Jerry's concentration of force and fire & movement tactics carried the day. John had an unfortunate run of cards, which the new deck didn't help with, but in general it all went fine. When I playtested this at home I managed to lose as the Axis when my assault on Bir Hakeim came unstuck in the minefields. We'll play a few more games with the new deck and see how it goes before any more tweaks.

The next thing I want to try is a home grown scenario with a deeper board (12x12 instead of the standard 9x12) to see if I can translate some Command Decision and Spearhead scenarios into Memoir 44.