As it was the 6th of June , we thought it would be appropriate to put on a D-Day anniversary game. What better than Easy Company, 506th PIR assaulting the German gun battery at St. Marie-Du-Mont.

The scenario was largely lifted from the one in Fireball Forward, and converted to play with Blitzspiel. We played it on Johns 2x3 game mat (representing 400x600 yards), using my 15mm toys. This was the first serious outing for my PSC 15mm US troops, not that anyone noticed. 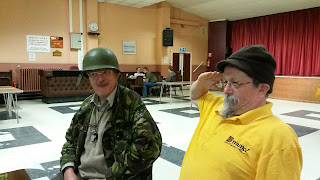 The Americans were suitably slovenly and enthusiastic. Johns beaten up old M1 hlemet was horribly rusty but the liner was very smart. 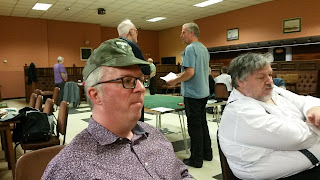 While the Germans were somewhat thoughtful. The offer of my Germans officers cap was declined. 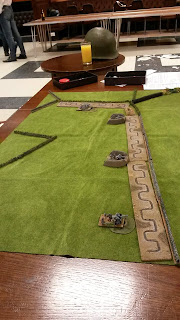 The battlefield from the east. The gun positions are marked, but otherwise there aren't any Germans in sight. The Americans have to destroy the German guns before than can fire 24 shots at the beach. I modified the original scenario victory conditions as in Fireball Forward a lot more happens in each turn than in Blitzspiel and the move distances are larger. I was worried I'd made it too hard for the US as the Germans could in theory win in six turns if all four guns got off shots each turn. 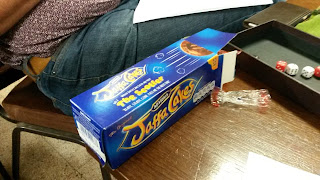 The Germans opened the game with some distraction tactics. Jaffa cakes. 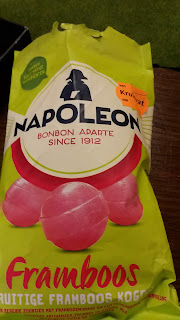 And these the fine Dutch sweets courtesy of Tim. 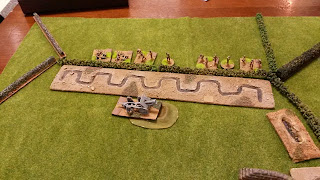 Lieutentants 'Dick' Winters and 'Buck' Compton led their handful of men up to the first hedgerow. E Company had around 20 men in the actual action, including some hangers on from Battalion HQ. The Germans gunners and the support elements numbered around 60. I gave the US paras a significant initiative advantage based on their historical performance.  Would +2 initiative be enough to deal with a force three times their size dug into trenches? 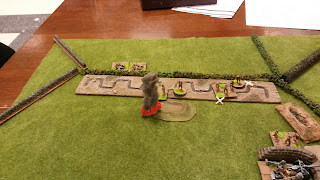 Compton was pinned by German MG fire from the battery defence platoon, but Winters successfully assaulted the gun position. One down and three to go. The rest of the German guns were banging away at the beach, while the two US .30 cals established a base of fire behind the hedgerow. 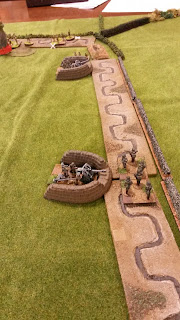 Some Germans from battery HQ made their way along the trenches towards Comptons platoon. As the US troops were so reduced I let them operate as teams (historically Winters organised them into 'squads' of three men each!). The Germans, being regular artillerymen albeit having spent most of the war digging holes and carrying boxes around, had to operate in sections. 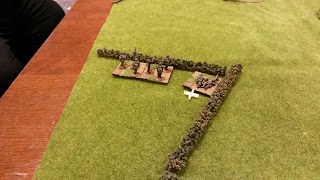 Elements of the German battery defence platoon engaged the US base of fire (the .30 cals).  Some of them are still hiding in cover. 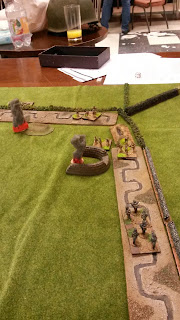 Comptons men destroyed the second gun as Winters moved up in support. The Germans had accumulated nine shots by this point. 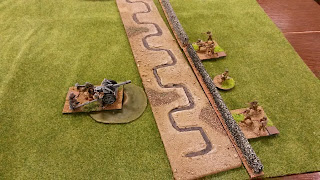 Lt Spiers platoon then appeared from the north and ran over the open field to the hedgerow. Lt Spiers may or may not have executed some prisoners in Normandy, so I gave him a figure with a Thompson, as he was so armed in 'Band of Brothers' in the infamous execution scene. 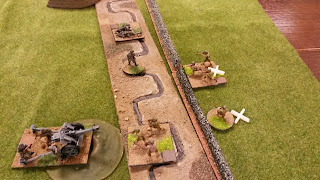 Unfortunately the rest of the German battery HQ opened up from the behind the hedge, pinning most of the Americans. One group made it over the hedge and up to the gun. 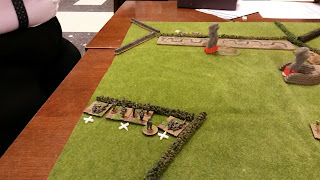 The German battery defence platoon were largely pinned by this point, but their officer ran up to rally them. Their return fire had pinned one of the .30 cals. 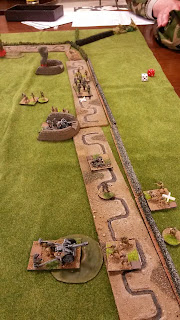 Comptons platoon was tied up fighting the German riflemen in the trench, so as the battery defence platoon was pinned, Winters led his group at a run across the open ground. The artillerymen continued to pound the beach. 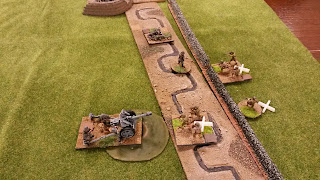 The MG42 managed to pin the last of Spiers platoon while the German battery CO, Hauptmann Stransky took cover in the trench. 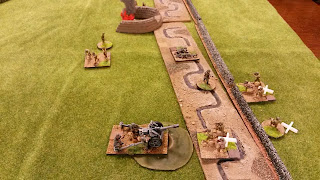 Meanwhile Winters had blown up the third gun and pressed on over the open ground, 30 yards away from the somewhat surprised MG42 team. 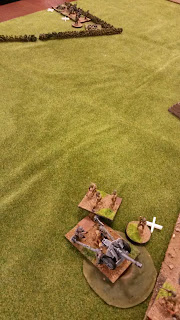 The US seized the initiative and Winters dashed forward, only to be pinned by Stransky! 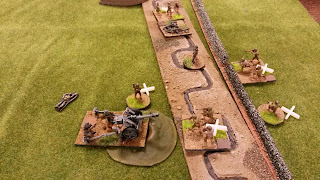 Compton assaulted the MG42 team using the trench for cover , but the other MG42 shot down Winters men in the open. Spiers men remained pinned. Meanwhile the German gunners continued to fire, up to nineteen shots at this point. Stransky was surrounded by pinned or dead Americans. 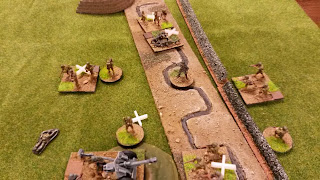 In desperation Compton led a rush across the open ground, only to be pinned by Stransky and his artillery Luger. However, Spiers managed to get some of his men moving again. Bang went the last 105mm gun. 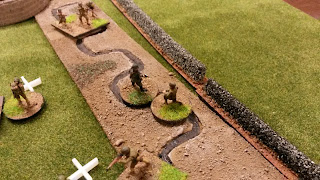 Spiers moved into the assault, personally taking on Stransky with his Thompson. 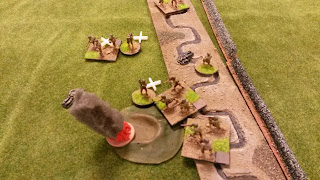 Bang went the 105mm one last time before Spiers men overran it. Stransky died for the Fatherland in close combat with Spiers. The Germans had got 21 shots off before being overrun.

I must confess I was surprised how well that went. At first I thought the US Paras were doomed (attacking superior numbers in an entrenched position!), then as the US qualitative superiority tore through the Germans I thought they were doomed instead. In the end Stransky's heroic stand made the game a real nailbiter, and with slightly better shooting from the German battery defence platooon they could have swung it.

In the end the result was amazingly historical, although irl it was half of Spiers platoon who were shot down in the open rather than Winters. I can see why Winters was awarded the Silver Star!

Many thanks to the  players who made the whole thing so enjoyable.