For some unaccountable reason I decided I needed a 15mm Brummbar (Grizzly Bear), so I picked up a Battlefront one some time ago. This is an old resin model rather than one of the newer plastic ones. 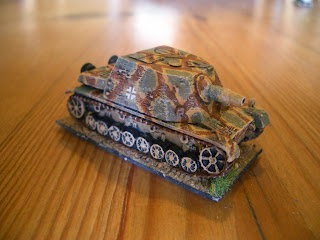 It went together very easily and rather looks the part. 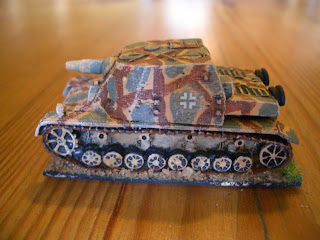 The running gear is a bit crude, but that is common to a lot of the older BF sculpts. 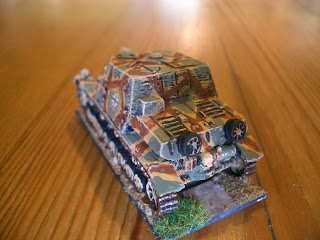 The detail is moulded in nice and deep which makes it very easy to pick out the details with a heavy drybrush over a black base coat. 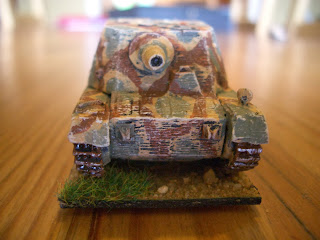 The zimmeritt is also nicely moulded, I gave it an inkwash to pick this out. Otherwise it was finished in dunkelgelb with green/brown camo and a couple of basic white outline crosses. The pattern is from a photograph and rather striking. The whole thing was lightly drybrushed in tan to bring out the panel lines.

It ended up as rather a nice model, and complements my Sig 33,  but unlike the latter, has yet to take part in a game! At some point I'll design a scenario around it and it can come out to play.
Posted by Martin Rapier at 04:22