The Battle of Valls

John has recently acquired a new wargames book with a load of Peninsular scenarios covering battles I'd never even heard of, mainly as they featured the Spanish army (very unlike my copy of Pagets 'Wellington in the Peninsular!'). John duly fixed up a scenario, and I took the Dons while Tim C took the wicked French. We played it with Brown Bess using Johns 15mm toys. 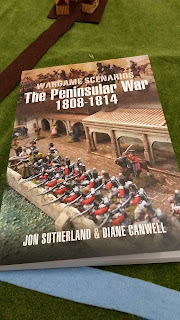 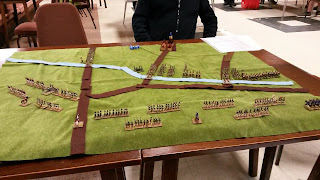 This battle featured Redings Corps defending a ridgeline, which St Cyrs French had to assault, crossing a fordable river in the process. I took the Spanish, my mission was to survive for 12 turns. Well, that'll be easy I thought. 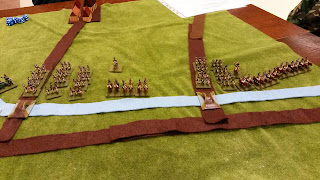 An awful lot of Frenchmen lined up on the other side of the river. 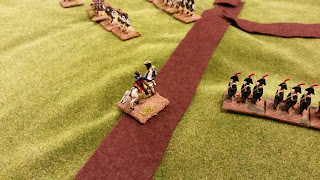 Here is the brave General Reding, standing next to the Walloon Regiment. The Walloons were the best unit in the Spanish Army, which isn't saying much. 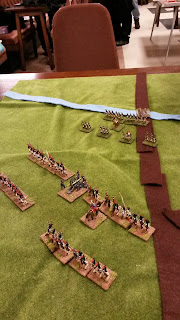 A small French force approached my troops on the left hill. 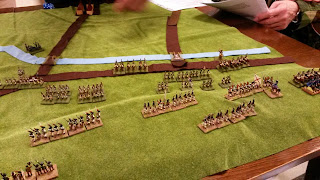 While the bulk of the French attacked my centre and right. 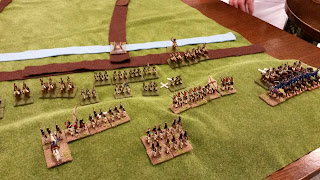 A massive cavalry melee ensued, while the French skirmishers took potshots at my infantry. 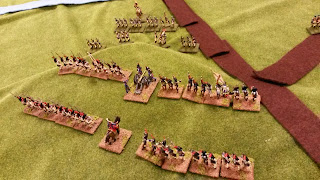 The Voltigeurs also shot up my left flank, while I wondered what to do about the annoying skirmishers. My chaps hadn't been trained to spead out. 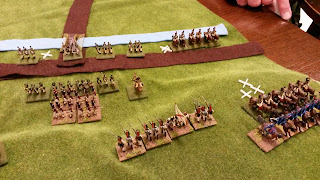 It turned out  a brisk bayonet charge made them run away, even if you did end up running into their supports. The Spanish cavalry drove off one French regiment, but very unfairly, another took its place. 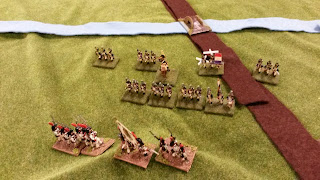 Over on the left we pushed away the skirmishers too. 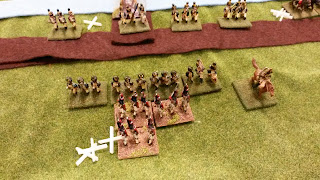 In the centre my chaps came off rather worse from the encounter. Oh dear. These French infantry are rather good aren't they? 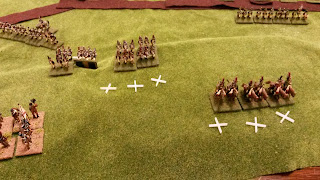 Things start to look a bit sticky in the centre as Spanish units start to disappear. 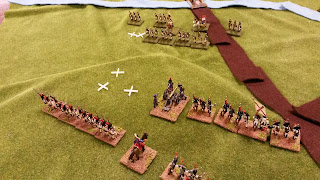 My heroic chargers also vanish on the left flank. Holding on for 12 turns is starting to look a little hard to achieve. 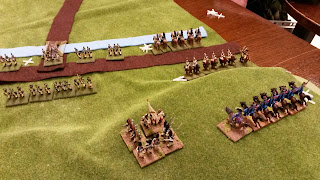 Over on the right my heroic cavalry push back the other French regiment, supported by a square. 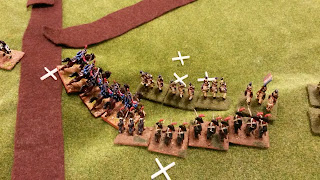 And in the centre the Walloons, supported by cavalry, launch a desperate counterattack. This actually went quite well and the French routed off. 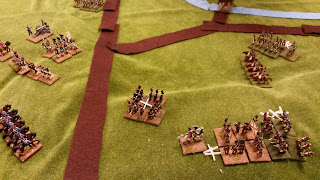 After that it was a case of hunkering down and hanging on. My chaps formed square and the cavalry pulled back. 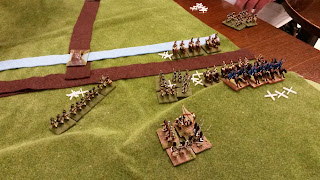 Over on the right my cavalry and one remaining infantry unit put up a dogged resistance. 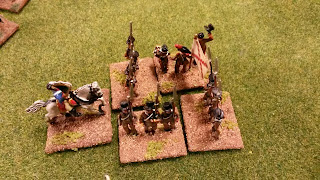 Reding joined the Walloons in square. 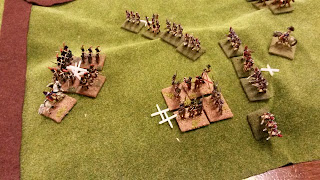 While half the French army bore down on them. 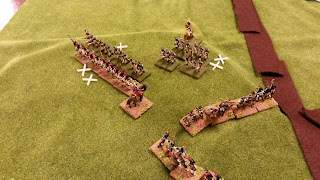 Over on the left the French finally charged and I counterattacked. 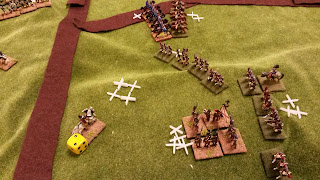 Things didn't go so well in the centre. The Walloons routed and Reding was wounded. 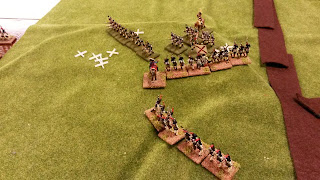 And over on the left the Spanish collapsed.

It was pretty much game over at the point, but although I hadn't managed to save seven units by turn 12, it turned out that I had thwarted the French victory conditions too so it ended up being a draw! As in the real battle, poor old Reding was wounded and his Corps largely destroyed albeit not without inflicting some losses on the French. The Spanish cavalry covered themselves in glory though, holding off superior numbers of French heavy cavalry. It was very hard fought and tense throughout, and I thought the rules reflected very well the importance of troop quality in the Napoleonic era without overdoing it.

We had a bit of a game washup afterwards, the main area of oddity was the treatment of squares which seemed a bit good in close combat with infantry as they had a large morale bonus, although the tactical antidote was to shoot them to bits before charging in as they had a massive firepower disadvantage. This sort of thing is often factored in to higher level games.