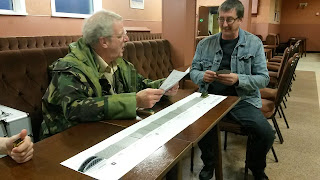 The  game consists of a stylised representation of the airborne corridor, divided up into sectors.  Here John explains the highly complex and detailed rules to Alan. 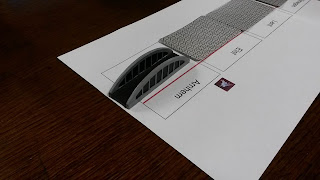 At the far end of the corridor is the prize, Arnhem road bridge. Represented in this case by a very fine Leven miniatures 6mm arched girder bridge. 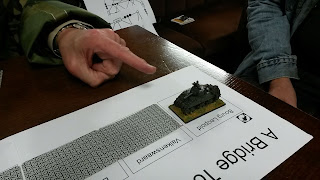 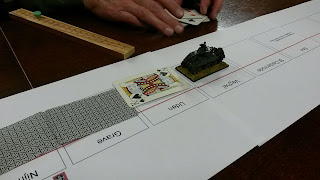 The second game was an eBay curio titled 'Manouvre'. It apparently dated from WW2 as it referred to 'servicemen and women' and also referred to the inevitable periods of monotony of wartime service. 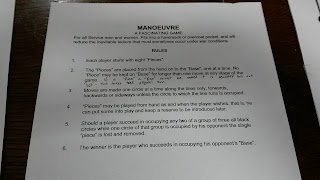 The rules were somewhat brief! 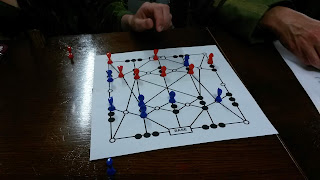 It involved a stylised board using point to point movement, moving one piece at a time with the aim of capturing the enemy base. Enemy pieces could only be destroyed by outnumbering them in specific spots. Like all such similar games (Chess, Go etc) it was actually fiendishly hard as it required a good degree of forward planning and looking at the big picture. Here we see my heroic blue chaps taking the fight to Roberts wicked red pieces. 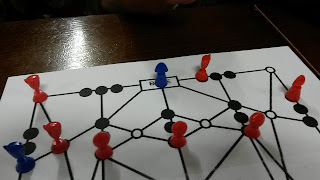 And despite the apparent impossibility of breaking through, my blue 'Napoleon' piece legs it into the red base, securing a hard fought victory. 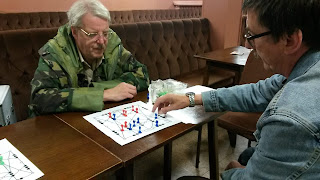 Alan and John play in parallel. In the end we played four games of this and all agreed it was a very clever little game. It is hard to see it seeing much use in the front line trenches though.

So, with the three Arnhem games and four games of manouvre, we managed to get through seven games in the evening. Good stuff.