While Tim leads us through the wilds of  Ancient history one battle at a time, I am focussing on the Punic wars scenarios in the original CnC Ancients scenario book. Anyone who has double sized DBA armies organised for the Punic Wars will have enough toys to do these.

So, naughty Hannibal having crossed the Alps continued to stomp around northern Italy in the Po valley picking up Gallic allies. Consul Sempronius, keen to win a victory before his term was up, marched to intercept them and link up with the forces of Publius Scipio. Scipio had been wounded in a cavalry action the day before and urged Sempronious not to attack, but Hannibal demonstrated near the Roman camp at dawn one chilly December day and impetuous Sempronius marched the Roman army across the freezing River Trebbia to do battle. Unknown to Sempronius, Hannibal had laid a trap.... 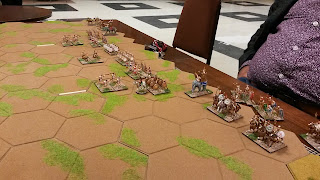 The Carthaginians. Hannibal had around 40,000 men in this battle, a mix of Carthaginians, Numidians, Spanish,  Gauls plus the elephants which had survived the mountain crossing. There are a couple of warbands and some gallic cavalry offtable with Mago, up to no good. They will arrive under specific circumstances. The Carthos have no less than three leaders, including Hannibal himself, along with Hanno and Mago. 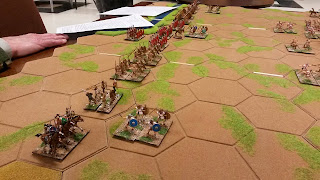 The Romans also had around 40,000 men (Livy and Polybius disagree), the core being four Legions plus four allied alae supplemented by a number of auxiliaries. Unusually, the CnC army has two Roman warbands(!) presumably ot represent local gallic allies. Sempronius is leading from the front in the middle of the Hastati and Princeps (the chaps with red shields).

As ever, we played on my Hexon terrain using my collection of 20mm Ancient figures. Mainly HaT but supplemented with Italieri, Airfix and a few Newline metal figures. I was torn between green or arid hexes, northern Italy in winter is pretty wet and unpleasant, but in the end I went with the arid hexes as they just looked better. 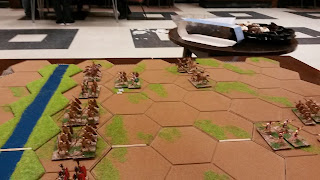 The Carthos opened with Hanno leading the Numidian light cavalry forward to harass the  Roman left with javelins. 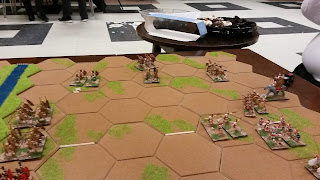 The Romans responded with their auxiliary cavalry supported by  a warband which pushed the Numidians back. 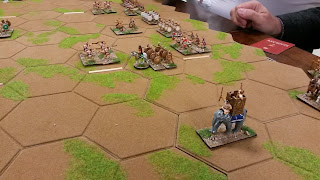 The Cathos in turn set their heavy troops rolling forwards, which included Hannibal himself with a unit of Carthaginian citizen infantry as well as the elephants. 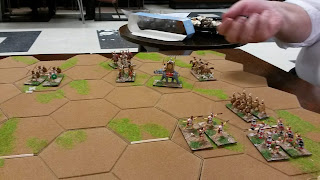 The elephants crashed into the Romans gallic allies. 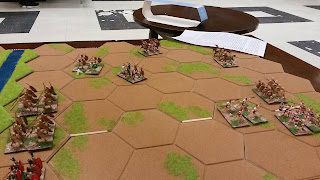 But had the worst of the encounter and only inflicted a couple of hits before legging it. Elephants are  a bit like scythed chariots, one shot weapons which have a very variable impact. 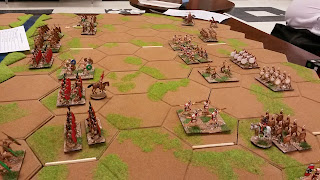 The Cathaginian centre and right now rolled forwards as the last of the Numidans were routed by the Roman cavalry and Sempronius advanced the Roman centre. Things weren't looking too god for Hannibal. 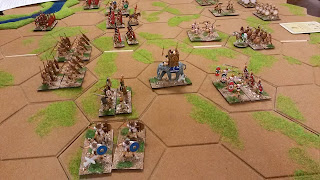 The last elephant charged the Roman warband supported by Spanish and Gallic troops. 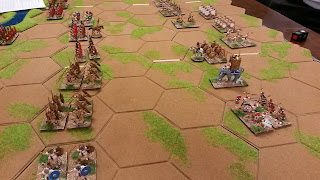 But only succeeded in pushing the alae back, while the Spanish infantry were trampled in an elephant rampage and routed away. Not too good at all. 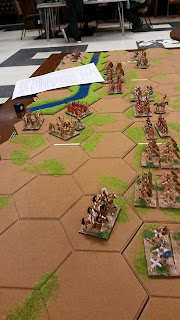 But what is this?! Mago has sprung has ambush and two warband and a cavalry unit appear in the Roman rear. Historically they hid in a gorge as Sempronius marched past. The warband engage the Roman Triarii while the cavalry get stuck into the Velites. 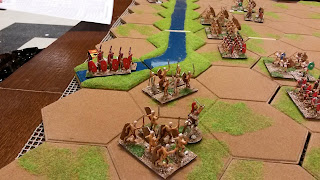 Fortunately for Sempronius, the Triarii survive but are driven back into the freezing river. Magos Gauls seem to have forgotten their clothes, balls of steel (or ice) for sure. 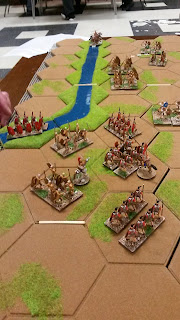 The Princeps and Hastati turn around to retrieve the situation, engaging the Gauls in a very pretty zig zag formation. The Gauls retreat route back to their own lines is firmly cut off. 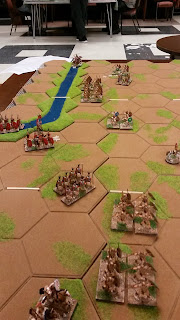 The Gauls are eventually defeated but at considerable cost and the Roman line is left in disarray. Mago and the surviving Gallic cavalry make good their escape to their own lines, riding down some Velites on the way. 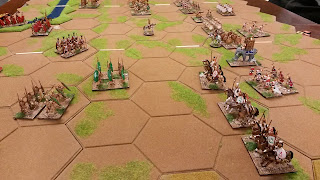 The Carthos push up their cavalry on the left to take advantage of the Roman confusion. 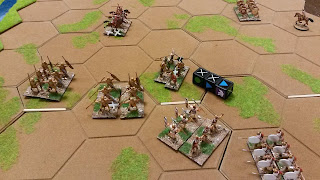 And a bloody battle over on the Roman left finally gives Hannibal the victory.

Another close fought battle, and as in real life, the losses mainly fell on the poor old Roman allies rather than the legions themselves while the Carthaginian centre and right suffered heavy losses. At least a few elephants survived, although irl they were not to survive the winter.

Compared to the Persian and Greek battles we are doing with Tim, the armies of the 2nd Punic War are very complex with a wide range of troop types. That was a close run thing for Hannibal, good job Mago turned up when he did.