Tim produced another 54mm WW2 game, this time using the WW2 version of 'Fistful of Lead', which I was keen to try out. For this adventure we were off to North Africa and the heady days of 1940 and Operation Compass. Tim has taken the scenario from the relevant Skirmish Campaigns book (I'm a big fan of those). Jerry, Gary and myself were the wicked Italians, while John was the British (the Welsh Guards no less). 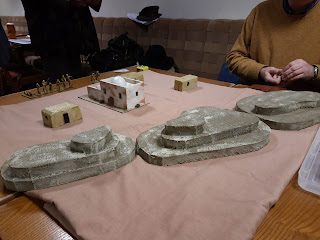 The battlefield, a line of sand dunes lies in front of Sollum and the Egyptian border. View from Libya (west). 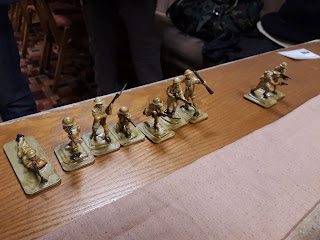 The plucky Brits, a rifle section and small HQ element (officer and a Tommy Gun toting Sergeant). These are Airfix 8th Army figures. 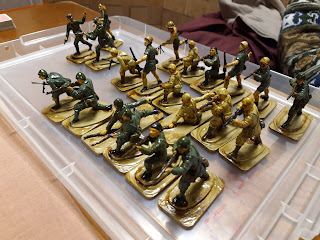 The somewhat larger Italian force, three rifle sections and an HQ. Figures from a range of manufacturers and very nice indeed. I was particularly taken with the barechested LMG gunner. 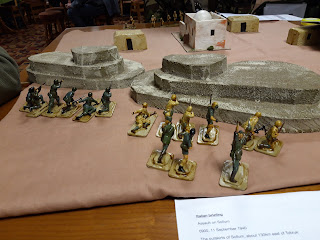 Our chaps had to capture the Stucco building rapidly and ideally get off the far edge rapidly, encircling the British. Our setup are was behind the convenient sand dunes. Deploying in a long line seemed like a good idea as speed was of the essence.  Garys section and mine, I was also apparently in command. 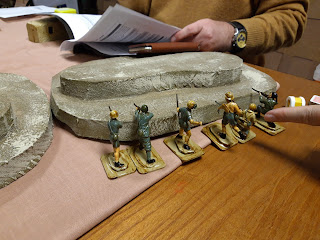 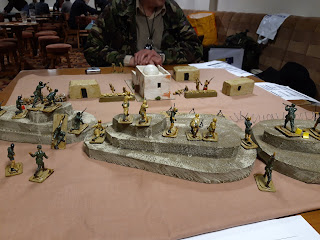 And off over the dunes we went, a mixture of walking, creeping and lying down. Sadly the crest of the dunes revealed the British in very unsporting trenches and even worse, barbed wire and minefields across some of the front. Some of our chaps were wounded or pinned by defensive fire, but in the main the British fire was fairly ineffective. 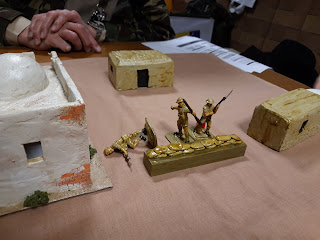 Our return fire went rather better, the LMGs managed to hit one of the dug in riflemen. I rather like the FFoL activation system, you are dealt as many card as active soldiers and the cards activate in value/suit order, but you choose who gets which card an some of the cards have special abilities (like +1 shooting or automatic reloads). So there is a degree of friction, coupled with some tactical decision making, which enlivens what would otherwise be the dull dice throwing contest so typical of skirmish games. 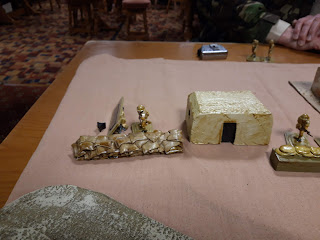 Even better, one of our riflemen managed to get the Bren gunner. That was lucky. At this end of the line, the dunes were very close to the British trenches, so our rifles were well within effective range. 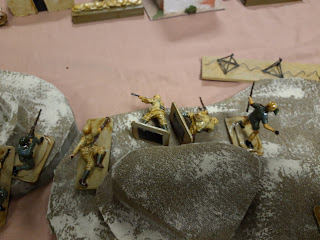 Things got a bit sticky in the centre and some of our men went down. 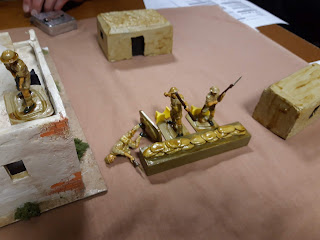 But LMG fire managed to pin a lot of the enemy (the yellow markers). By this time the Sergeant had put in appearance, blazing away with his Thompson. He was christened Sergeant Bass (fans of the 'The Defence of Bowler Bridge' will be familiar with the character). At close range, the Tommy Gun was quite scary, especially as we were quite bunched up. 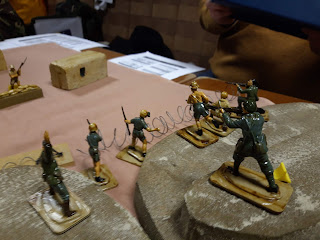 Jerry pushed cautiously up to the wire. One of his men was pinned. 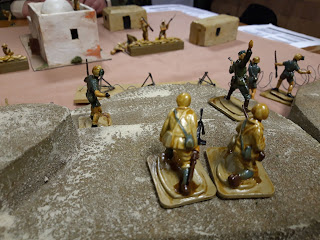 My LMG team. They had done loads of damage as I'd made good use of the activation cards, '2' cards let you roll two dice for each attack and pick the best, which meant they'd been able to blaze away with little chance of a low ammo result. The downside of 2 cards, is they activate a lot later than all the picture cards etc. 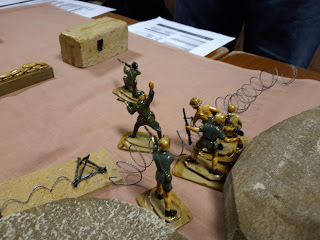 Jerry was through the wire, covered by LMG fire! The arm waving Italian Sergeant led the way. A very heroic figure. 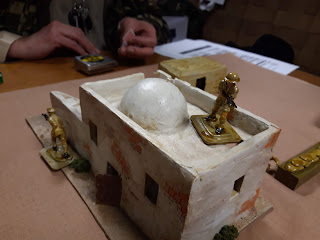 Less heroic was the British office who chose this moment to skedaddle, are we sure these are proper Guardsmen? Sergeant Bass grimly hung on however. 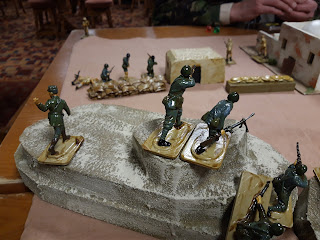 Garys riflemen pushe dinto the British trencehs, supported by the LMG team. The platoon CO led bravely from the rear (well, he's only got a pistol, but does give a rally bonus to troops in LOS within 12"). 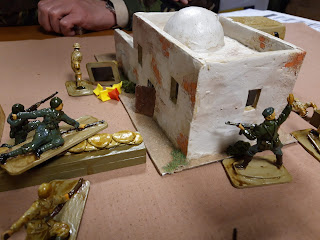 As the Italians closed in on the stucco building, Sergeant Bass made a run for it too, and the British officer was pinned and wounded in a hail of bullets. 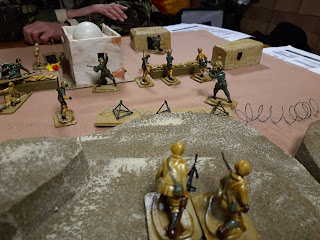 Meanwhile Jerrys section took the other British trenches, covered by my LMG. 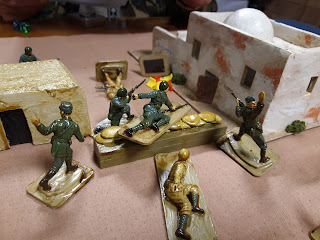 Sergeant Bass heroically fought off his attackers in close combat, but was wounded in the process. 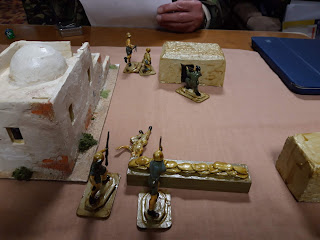 Jerrys soldiers cleared the remaining buildings and the game was clearly up for the British as they'd only got a couple of men away while the Italians had captured the town and still had the required 12 soldiers left to exit the far edge. 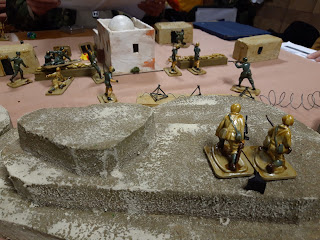 The situation at the end of the game. A decisive Italian victory, which in the Skirmish Campaigns system will give the Italians an advantage in the next battle.

Well, that was a load of fun and worked really well. It seemed to move much faster than the black powder version, possibly because there was a lot less reloading. In hindsight I wonder if the British would have been better wiring/mining the closer sand-dunes and putting the Bren out to cover the much bigger open space at the far end. In any event they were very unlucky to lose their Bren team early on, and the carnage wreaked by the Tommy Gun wield NCO indicates how things could have gone for the Italians. Good stuff!