This is a bit of a response to the challenge posed by Chris K on his NQM blog, and taken up by Archduke Piccolo. Matching the ratios of vehicle types in our fleets of toys to the ratios of real world holdings of the Panzerwaffe.

Chris had looked at overall wartime production of vehicle types, divided by 600 to generate the comparison figures. I chose to focus on my 15mm tank fleet, as I have so many in 6mm it would be hard to count them all, while my 20mm collection is fairly small and curated.

So looking at overall production, it is something like this. Figures for real world production are in hundreds, whereas 'my fleet' is individual vehicles!


I have to say I'm not convinced by war production as a metric as the operational consumption of vehicles rose so sharply in the war. In 1944/45 German AFV production was at its highest ever level, but so was its loss rate. The production figures for Pz 1 look a bit low here too.

Another metric to consider is actual inventory at a point in time ie stock of tanks to hand as a comparator of sensible vehicle ratios. Fortunately Jentz saves us the bother of trying to work this stuff out. I struggled to find comparable inventories for SP guns, I did find some for Stugs, which will have to do.

I think this gives a much better idea of vehicle ratios. The real standouts for me are the vast numbers of Panzer I right into 1942, the small numbers of Pz IV until 1944 and the large number of Panthers in 44/45. Some vehicle types are over-represented in my collection (esp Tigers) and others under-presetned (SP artillery, Marders) but by and large I was collecting vehicles with a view to one stand = one platoon type games and the mix more reflects company and battalion organisations at particualr points of the war than anything else. I am a bit light on Pz IIs for the 1939-40 period, but that is why I have four unbuilt. 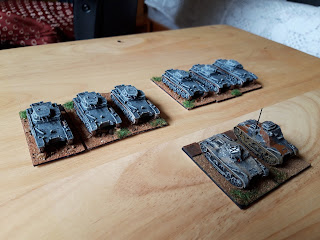 Here are my Pz Is. A mix of QRF and SDD. The one at the front is sporting Nationalist colours for the Spanish Civil War. I have actually used these a fair bit in various early war and SCW games. They are fairly under represented in other scales, the only 6mm ones I've got are command vehicles, but I do have a few Jagdpanzer 1s. 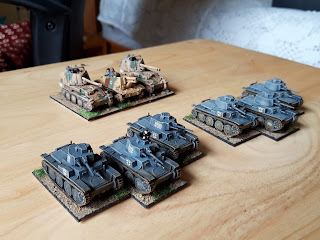 On an early war theme, here are my various Pz 38s. Half a dozen Zvezda 38ts, fairly plain so they'll do for German, Rumanian and Slovak. I've also got a couple of BF Marders and a QRF (or maybe BF?) Grille. I've also got  moderate numbers of these in 6mm, as well as various Marders and other SP guns including Hetzers.

I don't have any Pz 35s, although I do have a fair number in 6mm in both German and Rumanian service. 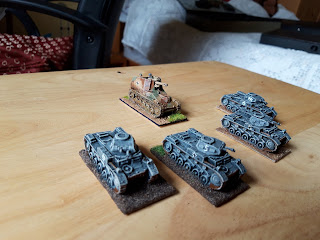 Panzer IIs. The tanks are all Peter Pig, and the some of the few survivors from my 15mm desert forces. These were repainted panzer grey and have fought in 1940 France. Handpainted markings, which I'm not sure I could manage now. I also have four Zvezda ones unbuilt, which I must assemble at some point. I have quite a few of these in 6mm, in both panzer grey and desert sand.

I've also got a BF Wespe but no Marders on Pz II chassis. Again, I have a fair number of Pz II SPs in 6mm, including some SP 150mm infantry guns, Marders and Wespe 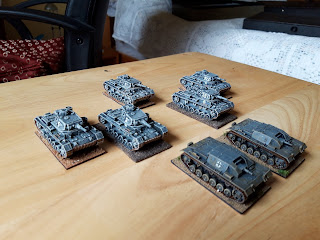 Early war Pz IIIs. The tanks are all Peter Pig Pz IIIG/H although I use them as IIIe as well. More survivors from the Afrika Korps in different colours. They are supported by a couple of Zvezda Stug IIID, which are lovely little models.

As might be expected I have quite a few of these in 6mm in various colour schemes. 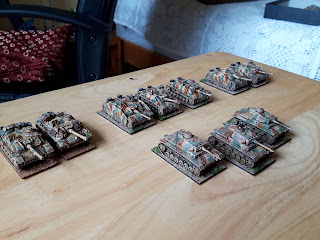 Later war Pz IIIs. I've got a few Pz IIIL (converted from Zvezda flammpanzers) and several Stugs. Good job given the Stug inventory figures. The Stugs are a mixture of PP and PSC with a range of mantlets, various confgurations of side skirts and including one StuH. Being a terrible cheapskate I also use these as Stug IVs and early Jagdpanzer IVs as they all look much the same.

I am rather more selective in 6mm. 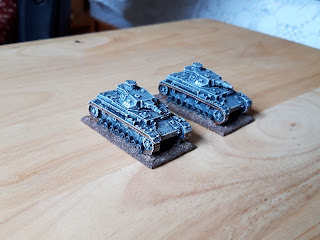 Early war Pz IVs. These are Peter Pig Pz IVD I think. The last of the Afrika Korps. I have a couple of Zvezda ones unbuilt too. The numbers of Pz I, II, III, 38t and IVs I have are able to model various combinations of early war panzer battalions at one stand = one platoon. The 15mm early war tanks have seen more action in 1940 France than anywhere else as I'e mainly been doing the 41-42 eastern front in 6mm. That may change as I've got more 15mm Russian stuff now. 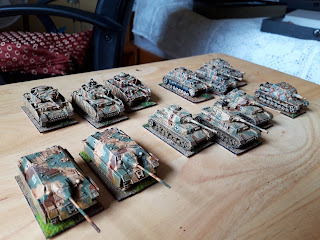 Later war Panzer IVs. I have quite a few of these from various manufacturers. The tanks are BF, PSC and PP, with varying combinations of turret and side skirts. Models range of PzIVG to PzIVJ. There are also a couple of Jagdpanzer IV/70s (QRF, lovely little models) and a BF Brumbar. Essentially there is enough stuff here for a late war panzer battalion at one stand = one platoon, using a Pz III as a command vehicle. The Jagdpanzer IVs are there for the Panzer IV/70 companies in late war tank battalions as well as divisional panzerjaeger battalions. The largest number of these I hacve used was in our game of Periers Ridge which featured half of 22nd Panzer Regiment. 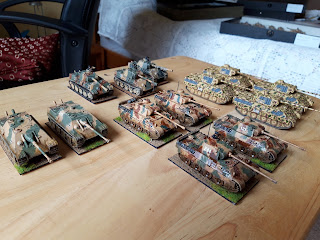 Panthers! Again, I have a fair few of these, enough for a late war panther battalion at one stand = one platoon. Models include D, A and G, manufacturers being PP, Zvezda and some dodgy Corgi diecasts.  There are also a couple of Zvezda Jagdpanthers to serve both in indepedant panzerjager battalions but also the ersatz Panther companies such as the one Panzr Lehr used in the Battle for the Reichswald and also featured in the battles for East Prussia and Silesia. The Germans had a lot of Panthers in the last 12 months of the war. I also have a vague hankering to run Grossdeutschland at Kursk with its brigade of 200(!) Panthers. The most Panthers I used in a game was one of the Sandomierz Bridgehead in 1944 when I used a whole (weak) battalion, as well as the 107th Panzer Brigade at Veghel. 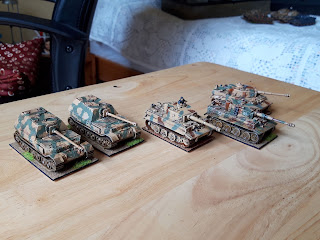 Tigers. The Tiger 1s are all Peter Pig, each model is slightly different with various combos of wheels, damage and stowage. Very hefty pieces. Enough for a company (or a battalion at one stand per company), I've had these for some years. The Zvezda Ferdinands are relatively new additions, mainly bought for some occasional Kursk battles, but they would do for Elephants later in the war as well.

I don't have huge numbers of 6mm Tigers, but I do have quite a few Elephants. A second hand purchase which included some oddities. I also don't have a 15mm SturmTiger, but I do have a 20mm one, converted from the Airfix model. I've never used more than three of these at once, and gernally only one or two. 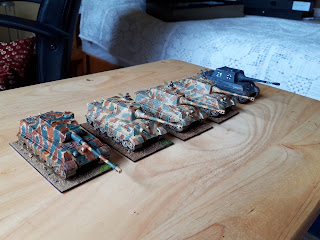 More Tigers! I have quite a few Tiger IIs, partly due to finding a shop selling off a job lot of Roco Henschel turret Tigers. I used to use them to mark unspotted German vehicles, as in 'Pattons Best', and like the Tiger 1s, enough for a company (or a battalion). Later war Tiger Bns were predominantly equipped with these . I picked up the Porsche turret one later, handy for Operation Goodwood, and avid readers may recall its exploits in our Bulge game last year as it assaulted St Vith with all its pals. Finally, there is a Jagdtiger, converted from a TII which I have yet to repaint. Not a very common vehicle, but there was a battalion in the Bulge and they later hung around in the Battle of the Rhineland.


So there we go,  a whistlestop tour of my 15mm German tanks and SPs. I've only been collecting these since the late 90s, so it isn't a bad haul. A lot of my 6mm stuff dates back to the mid 1970s, and there really is an awful lot of that. I think I've got at least 20 Panthers and countless hordes of Pz III and Pz IV.