Simon put on an American War of Independance game using a grid based version of One Hour Wargames. I was interested to see how this worked as the bases I've adopted for my WW2 variant are so huge they may as well be grid areas!

I did an early hex version for WW2 but that used a 9x9 grid, whereas Simon went for the very bold approach of using a 6x6 grid.

The British forces were myself (with two line regiments), Graham (with two regiments of Hessians) and Tim G with a regiment each of Light Infantry and Scottish Infantry. The Scots were classed as shock troops and had a morale and melee bonus.

The wicked Rebs were John with two units of rifle armed frontier types, and Tim C with two regiments of continental infantry.

The scenario was based on one in the OHW book, itself based on an AiW counter insurgency sweep against the 'Swamp Fox'. Tim Cs general was the Swan Fox himself. 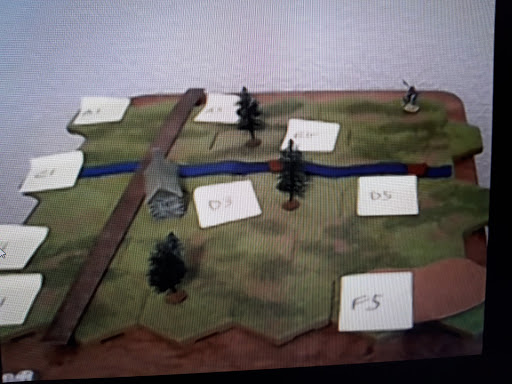 Apologies for the poor quality pics, it is how things came out on the monitor. The table from the south. The river is only crossable at the fords the woods are dense and marshy, so our chaps can't go in them.
Simon used a card activation system for units (so it wasn't IGOUGO like the standard rules). The first unit on was my General figure up in the top right corner. 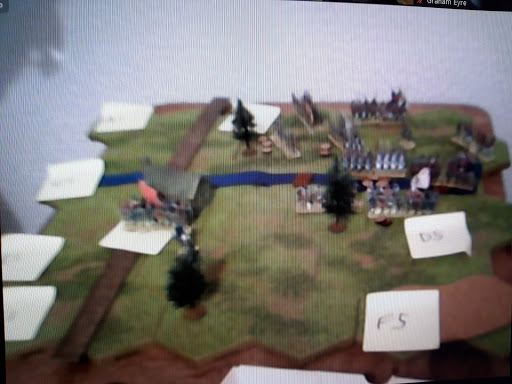 As time progressed the protagonists all appeared. The Rebels had very unfairly put their riflemen in the 'impassable' woods, so all our chaps could do was stand outside and shoot at them.
Our basic plan was simple. The Hessians would advance south west and take the village via the centre ford to pin the enemy. The Scots would go left flanking and the English regulars would be in reserve to exploit.
The Hessians quickly got engaged in a prolonged firefight with the Rebels and in the image above the Scots infantry are about the assault the right hand ford defended by some Continentals. I have committed one reserve regiment to help to Hessians clear the woods at B3. 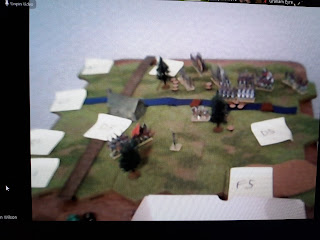 The Scots and Continentals duly wiped each other out! This left the ford uncovered as the riflemen were pinned in firefights, and the Lights hastened towards it. Tim C was hideously unlucky trying to activate his reserve Continentals and they were stuck south of the village. Along with the card draws for sequence, units needed to throw a Blitzkrieg Commander style activation throw with various modifiers. 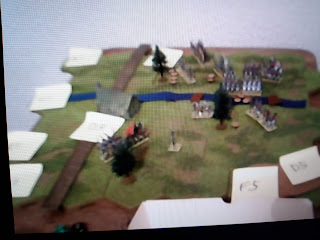 The British lights masked the rebel riflemen in D4 while we continued to plaster B3 with massed volleys. Despite their cover, we were inflicting hits. The game had the novel concept that cover let units take extra hits, but they lost the benefit if they moved out, so it was possible for units to become completely pinned in cover - which is what happened here. 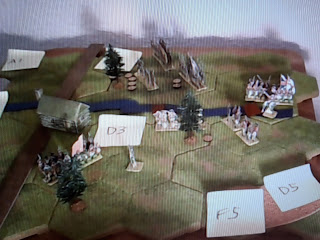 I personally led the reserve British regiment across the ford. Unfortunately one of the Hessians had enough and ran off. 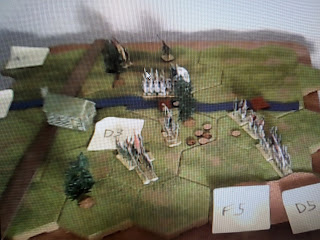 I galloped back to supervise the defeat of the rebels in B3, which freed up the other Hessians to take on the last riflemen. The British were well across the ford and formed up in a neat line, as the Continentals marched cautiously towards them. Having a General nearby gave an activation bonus, so commander placement was fairly important. 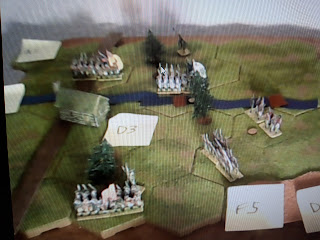 The last riflemen were despatched and both regiments of British pushed forward on each flank. The 'swamp fox' pulled his last unit back into a wood near our exit point. 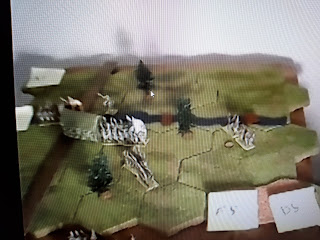 The entire British army surged forward (apart from the Lights who failed their activation roll). The Rebels decided discretion was the better part of valour and melted away. A glorious British victory! 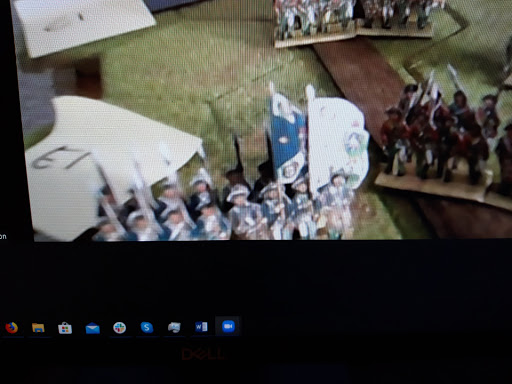 Eagle eyed readers will have noticed that the figures are rather....flat. That is because they are paper cutouts, and very pretty they are indeed. Here are a couple of closeups of the units.
That all went pretty well and it has inspired me to revisit my own OHW variants. I'd already done a hex based WW2 version and it shouldn't be beyond the bounds of human ingenuity to convert my latest WW2 offering to a grid. I am wondering about using squares instead of hexes though, as on such a small table, the hex grid distortion is quite marked and leads, at the most basic, to obvious issues with two units being able to gang up on one automatically, which doesn't seem quite right. Squares solve this as units can only ever be adjacent to one other orthogonally, even though squares have some other issues.