For my session at VCOW 2020 I chose to re-run the Road to Minsk game I'd already tried out with the Sheffield regulars. I knew the rules worked and I knew the scenario was OK, which meant I could concentrate on the logistics of arranging a game with people from all over the country, many of which I'd never met before. I deliberately went with a more low unit density scenario than the Kursk and Battle of the Bulge games I'd done with these before as I was concerned about playing time. For our regular games, we have the luxury of playing over two evenings, but I was going to run this in a single session.

In the event, the VCOW organisation was impeccable. I had nine players signed up a week before and we had plenty of time to get set up beforehand and make sure all the comms was working prior to the actual conference start. I'd originally planned on only having four players and the rest observers, but with nine signed up, I decided to give each of them at least one unit to command as well as designating overall commanders. We'd run some pretty big remote games at the Sheffield club, and as long as we went round in a strict order, I was confident it would be OK.

With the player comms all set up, it also gave each side plenty of time to get to know each other a do some planning. Something which really adds to these remote games I find. 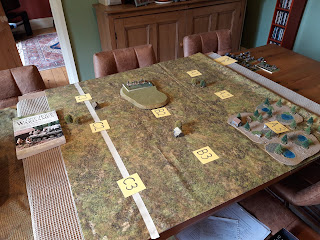 I got set up on Saturday morning, in between attending other VCOW sessions. View from the east. The Germans have to get two units off the road in zone C3. 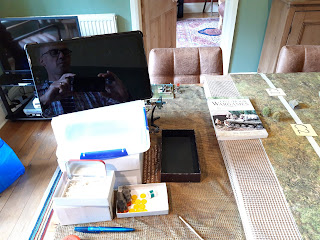 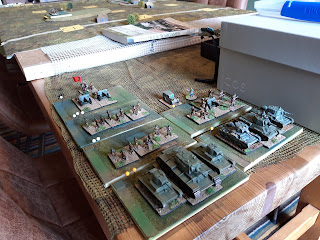 The Russians all lined up for easy access during the game. 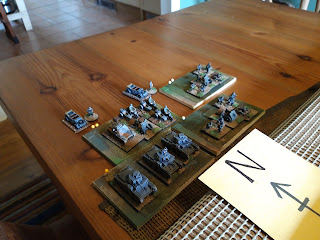 And the Germans placed off the northern table edge. 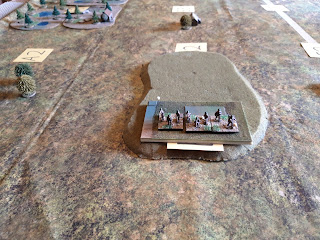 The opening setup, one lonely Russian rifle regiment on the Hill facing west. Mark had this unit, and I also gave him one of the reinforcements. 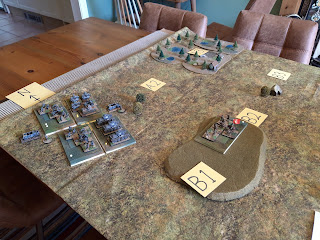 The Germans came piling on with a strightforward dash towards the exit road through the gap. There had obviously been a bit of planning going on. Panzers and Motorcycles in the lead, infantry following behind. 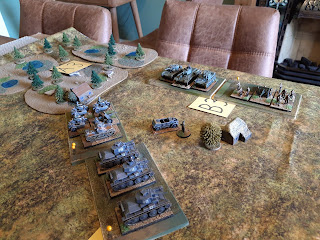 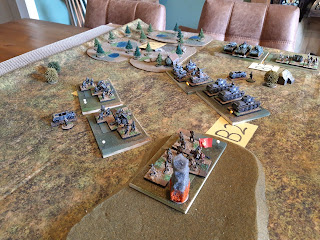 Further back the Russians on the hill were under artillery fire, but the German infantry were already lagging behind. 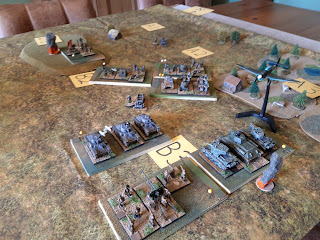 The Panzer battalion  moved up to engage the Russians, while the motorcyclists hung back and called in the Stukas. This allowed the German infantry to catch up, but they took some losses from the Russians on the hill. The massed Russians managed to knock out some of the Pz 38s, despite the Stuka attacks. 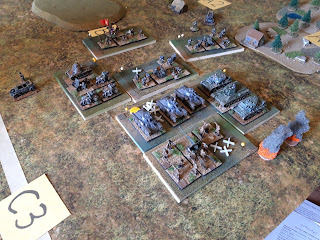 Contact was made! The panzers engaged the motor rifles and the unengaged Russian tanks took the oportunity to swing round and smash into the German flank. Ouch! The motorcyclists spotted a gap and roared south towards the road. 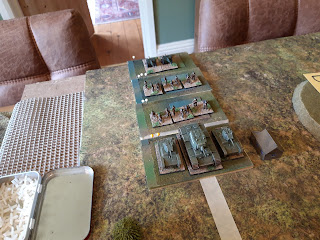 Meanwhile the bulk of the Russians appeared from the west, hurrying down the road with Alex's tanks in the lead. 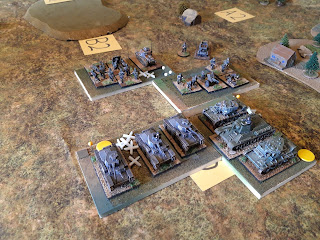 The fight really hotted up in B3. The Soviet motor rifle troops disintegrated, and the Schutzen drove off Marks rifle regiment. Things weren't looking too good for the Russians. 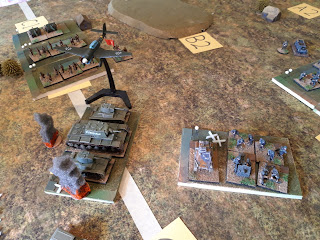 Now the KVs and T26s came under air attack as the motorcyclists sneaked past under their guns, albeit not without losses. The Germans revved their engines and managed to drive off the table without any more casualties. 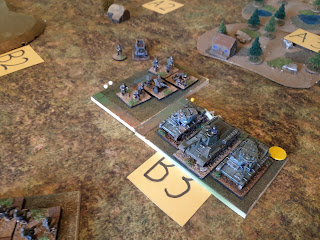 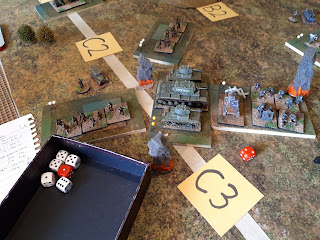 The other Germans headed for C3, but the Tank Regiment piled in and rolled some mighty dice in the assault (look at all those 5s and 6s!). This was enough so obliterate the German infantry in one fell swoop. 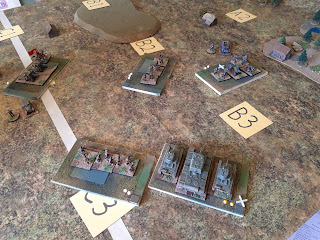 And then there was one.... the last German infantry battalion suddenly found itself assailed on all sides by a division sized force. 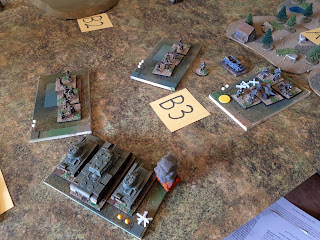 Under fire from all sides they hurried forwards, suffering sufficient losses to disorder them. 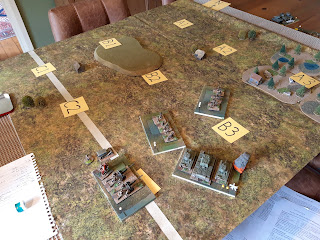 But they scuttled off the table to the east, albeit not via the vital road. So that left the Russians in possession of the field, and with only an isolated motorcycle battalion heading for Minsk.

That all went fine, and in fact we rattled through the game in plenty of time, which gave loads of time for a good wrap up session. Interestingly a different result to the previous run through, which shows how well balanced these One Hour Wargame scenarios are. It looked like it was all over the Russians at one point, particularly when the Mech Corps didn't block the exit road, but they managed to hold up the Germans and turn things around with aggressive concentric attacks.

Many thanks to all the players for taking part!

One of my blogging pals has posed this little challenge re simple rules: https://soundofficerscall.blogspot.com/2020/08/the-allure-of-simple-wargaming.html

As modified One Hour Wargames are listed, here are my answers to his questions:

Basic Questions:
How long did the game take to play?

a. Around an hour.

What was the scenario?

a. A standard one hour wargame scenario, modified a bit to suit the situation.

What happened?  Anything extraordinary?  (troops holding out amidst terrible odds?  Savage attacks that tore through the enemy line?  A straight string of rolling 6s or 1s?)

a. See the account above. It is still quite attirtional like the original set, but somewhat less predictable.

Who won and why?

a. The Russians. The Germans had a clear plan at the outset, but the Russians managed to distract the Germans from their goal. So it was command decisions which decided the outcome, rather than luck.

Did you enjoy the game? Why?

a. Sure. Wargames are a combinaton of art and science and this one told a plausible and hopefully exciting story.

Advanced Questions:
After reading the rules, how many consultations occurred with the rules during the game?

a.None. I wrote them and memorised them beforehand.

Was the scenario created for you or did you create it?

Did any troops perform remarkably good or bad?  Was it luck or part of the mechanics?

What were the victory conditions in your game?

a.Germans had or exit two units from the Minsk road before the end of the game.

If the game was or was not enjoyable (it has to be one or the other!) was it due to the mechanics?  the outcome?  tension?