This was another NBC game set in our fictional 1981 WW3. Tim put on this particular scenario, which was the prequel to his Plugging the Gap game. In an alarming role reversal, I was allocated to play the wicked capitalists. Blimey! Even worse, it was 11ACR covering the Fulda Gap, so I had to delay a Tank Army with a few squadrons of Sheridens. Oh well, I did say in the commentary for the Fulda Gap game that NATO tactics are all very well in theory but very hard to pull off in practice, so lets see how badly I can mess this up.

Simon was allocated the Heimatschutzen, so all they have to do is hunker down in the villages with their panzerfausts, just like 1945 all over again. They did have a few dodgy panzers arriving later, our only mobile reserve (so also just  like 1945).

The area of operations looked like this. This map was Tims first outing with Mapping Board, and it turned out very well. The Russians were coming from the east and northeast. 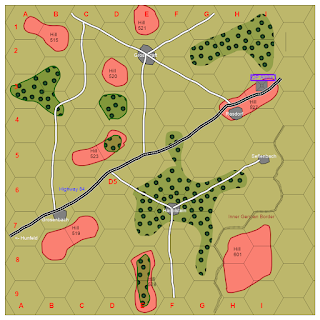 The terrain favoured a mobile defence in the north, but there wasn't anywhere to run in the south. 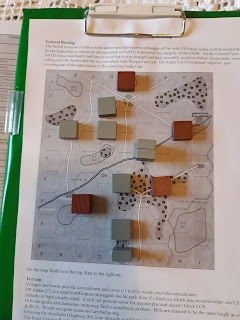 Simon and I had a Zoom staff conference and I plotted potential locations of our units with old Command and Colours blocks. In the end we went for an arc of dug in Volkssturm, sorry 'Heimatschutzen' as they call them these days, with interlocked ZOCs, and the Sheridens and ACAVs in  line behind with interlocked fields of fire. Further south where the border was closer I committed a full combat team with minefields closing off the gaps around the forest. If the Russians came that way there was only one position to stop them, and if they didn't, then they could be another mobile reserve.

Up north the plan was to fall back to successive positions while attriting the Russians with long range missile fire, artillery and airstrikes. That worked so well for the US in the last game... At least the US had loads of air defence, including a Hawk battery. Ooh, shiny.

OK, plan in place, troops deployed, now it was time to make the world safe for Coca Cola, jeans and Bruce Springsteen. I wasn't sure what hat to wear for this one, as unlike Tim, I don't own a US Cavalry hat. I do however have an M1 helmet, a jeep cap and a US mountain troops cap. Mountain hat it was, I also found this great image to use as a Skype backdrop. 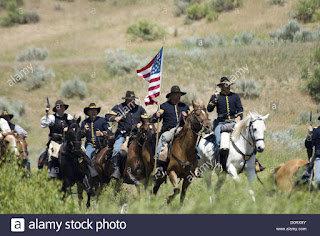 The Russians were played by John, Richard and Tim C. I didn't get as many photos for this one but I'll try and keep up with the narrative. 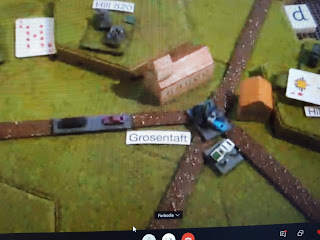 There were some puzzling things going on in Grosentaft. Civilians were fleeing the war zone, but the traffic jams here seemed beyond what was expected. Still, it had the nice effect of creating a huge roadblock on the road junction, which was fine by me as it reduced the threat from the northeast. 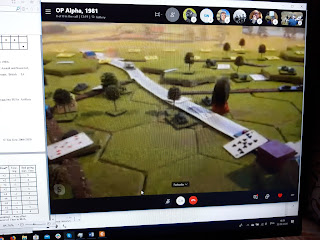 The action opened with a monumental barrage. Heavy artillery and FROGs rained down. Poor OP Alpha took a number of direct hits and was blown to pieces in short order. The Russians also seemed to have figured out where I'd parked my Sheridens across the Autobahn and they came in for some heavy fire. Fortunately HE isn't very effective against tanks. 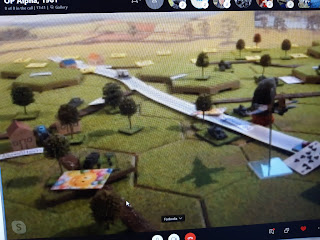 The barrage was followed up with airstrikes, which gave the Hawk gunners something to do. Again, my poor Sheridens were targetted, but the Soviet pilots aim was put off by the AA barrage and they missed. 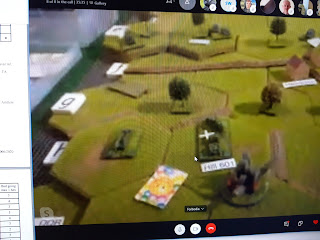 In the south, Russian engineers moved up on Hill 601 and started to dismantle the frontier defences. I hadn't realised this was an obstacle, but my combat team parked on Hill 528 could see them across the valley and opened fire with missiles, knocking some of the enemy vehicles out. 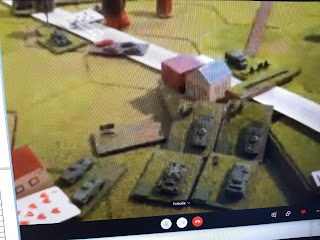 Things started to hot up in the centre. A Sov recce battalion appeared, and my Sheridens took them under fire at long range, their missiles knocking out a whole company of T64s. The recce fell back in some disorder. This was followed up by a reinforced motor rifle battalion who crashed into the Heimatschutzen holding Rasdorf. The fight was fairly brief and the Germans were overwhelmed. 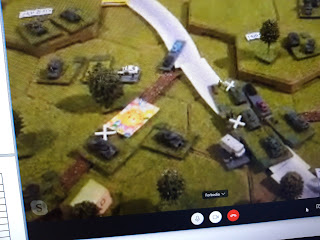 The Russians rolled on down the Autobahn while my Sheridens sidestepped. Missile fire from tanks and Apaches attrited the Soviets but not enough to stop them and the Russians rolled onwards. The elderly Shillelagh missiles were working very well, backed up by the TOWs from the cavalry troops.

My tanks and M113s took some losses and the US cavalry fell back to the next line behind the tree line. The Russians obligingly came on rolling forwards into my kill sack, crushing the German civilian vehicles under their tracks. 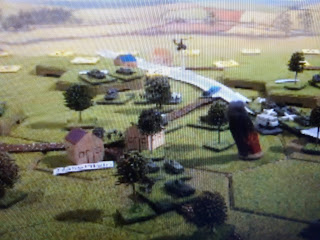 In the nick of time some Apaches rolled up, and fire rained down on the Russians from all sides, isolated from their pals by a blocking barrage landing behind them. It was juts like all those exercises we did. The Russians fell below half strength but their morale still held up. A welcome reinforcement were some elderly German tanks, who parked up in hull down positions on the third line.

It transpired that the Spetznaz were responsible for the traffic jams in Grostadt, and they now tried to attack my Tac HQ! Fortunately my HQ security detail were alert and managed to drive them off.


Back in the south, the Russian engineers were reduced to platoon strength by fire from my Combat Team on Hill 528, but not before they'd opened significant breaches in the wire. Their morale failed and they fell back eastwards. 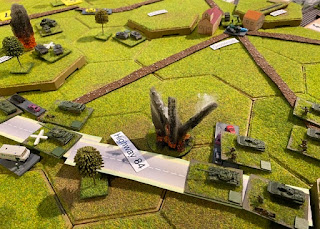 Evidence of Soviet atrocities! The Russian column rolls over German civilian vehicles. We will ignore the US blocking barrage landing on the Autobahn. Ahem. Well the President did say they were the Evil Empire.

We adjourned for the night and mulled things over. So far the loss ratio had been favourable, we'd lost two German and two US steps (the equivalent of two companies) but routed or destroyed ten steps of Russians, however the Russians were now getting quite close and we were at risk of being overrun in close assault. It would soon be time to fall back to the third line. Simon and I had a brief staff conference to plan out the options.

In the south, I fully expected another Soviet Motor Rifle Regiment to appear over Hill 601. We shall see if I was correct! 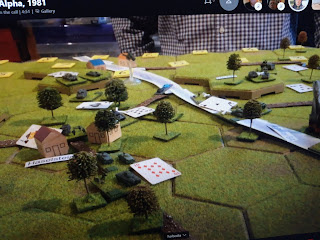 The Russian recce cautiously approached Haselstein in the woods. It was held by an entrenched company of Heimatschutzen. Meanwhile my combat team on Hill 528 finished off the Russian engineer battalion who had gapped the border wire.We also finished off the Russian battalion caught in the ambush on the autobahn, which was very helpful as Simon and I had planned a tactical redeployment to out last stand position. 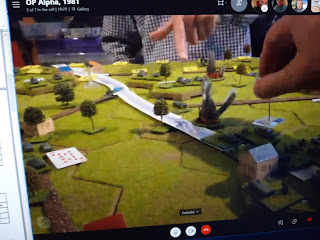 While the next Russian wave poured down the Autobahn, the reserve panzer battalion moved onto Hill 523, and my Sheridans took up hull down positions on Hill 519 to replace them. I also redeployed my Hawk battery and consolidated the ACAV combat team into a single wooded hill hex on Hill 519 with a view to close assaults. We now had a nice defence of interlocked ZOC covering all the approach routes with missile armed tanks positioned to fire from the rear. 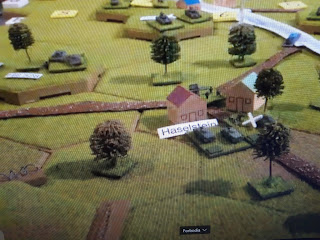 The Russians didn't seem too phased by this and pressed on aggressively. Their divisional recce battalion assaulted Haselstein and bitter street fighting got under way. Outnumbered 3:1, all the Germns could do was try and delay the Russians. 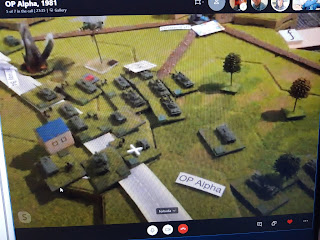 The Russian reserves rolled on, an independant tank battalion. No less than four companies of T62s equipped with mine rollers! Fortunately they didn't come over Hill 601, but just piled straight down the Autobahn. 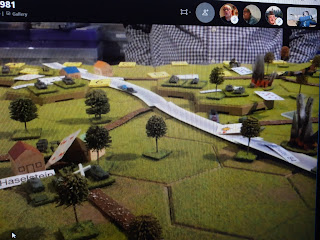 The other Russians waited for the tanks, and air, artillery and missile fire reduced my combat team of ACAVs to half strength, which was a bit unfortunate. I would have been better leaving them spread out. 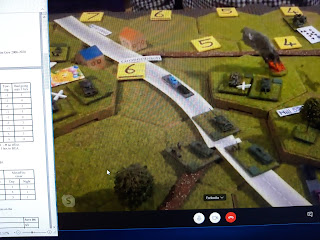 The Russians then came piling down the main road in strength again, leading with an MR battalion reinforced with a tank company. Airstrikes knocked a hit off the West German M48s. 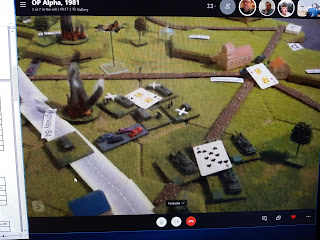 Air, artillery and missile fire demolished the remains of my ACAV team. Ooops. I should have pulled them out sooner. Delay missions are so hard. The fresh T62 battalion trundled forwards menacingly. The only bright spot was that the Russians were very wary of the defenders dug in around the roadblock in Grostadt, which really channelled their advance and essentially meant our entire right flank was locked down by a single company of Home Guards! 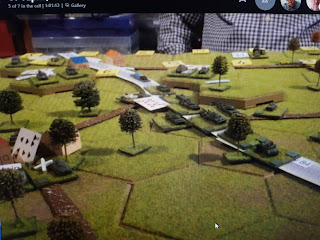 The T62s shied away from the woods and villages, and  piled down the road in a great, green armoured column to support the lead MR battalion. Our defensive fire chipped off a third of the lead Soviet battalion but it wasn't enough to stop them. 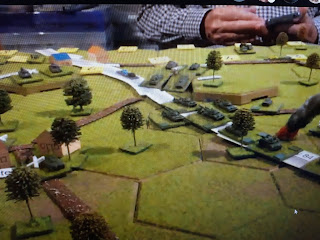 The Russians swung right and assaulted the German tanks on Hill 523, and completely obliterated them for no loss. Well, they were only M48s but even so.... 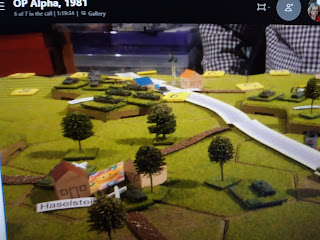 To add insult to injury, the T62s got the drop on my Sheridens and rolled over them in a great armoured tide. Although I got a couple of hits, the US tankers were obliterated. With that, it was time to go, with the US Cavalry reduced to a company of ACAVs and a company of Sheridens (plus their AA and artillery batteries) and the Russians held the field apart from the brave Heimatschutzen in Grostadt. Funnily enough in the 'Plugging the Gap' scenario, the US Cavalry were modelled as having just two companies as well, so at least I'd got that right.

That was a really good game, very enjoyable and a good simulation of why NATO tactics are so hard to pull off. We managed a decent delaying action and a couple of good ambushes, and did actually inflict a loss ratio well in excess of 2:1, but once the Russians got close in mass, you just had to run and I left it too late with two of my Combat Teams. Well played to the Russians, their divisional assets were a genuine surprise (I fully expected to be attacked by two MR Regiments), and also congratulations to my heroic German allies who really did fight to the last man in the defence of their homeland.