Another lockdown game, another NBC game. The rules seem to work well for multi-player remote play. Tim treated us this time to a trip to WW3, where we haven't been for a few years. He set it in the same 1981 WW3 as I'd been running for my BAOR games (which in turn was based on a standing start attack so everyone was scrambling for position). My own games were using SPIs BAOR game as the basis, although the war scenario was the one used in Threads. An interesting period, no horrible ubertanks  which make the game so miserable for the Russians, and BAOR was experimenting with its short lived Taask Force organisation instead of proper brigades.

Tim set his game further south down in the Fulda Gap. 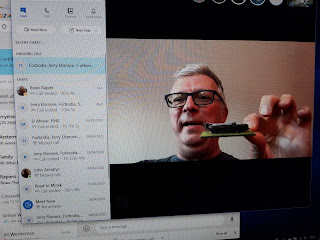 It started off with a demonstration of the mighty SCUD. 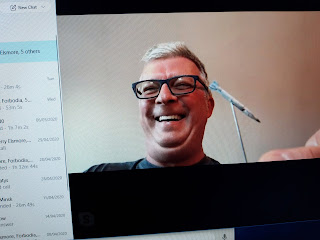 Including one in flight!

Simon and I were the heroic defenders of the Motherland, with a tank regiment and motor rifle regiment respectively, with Jerry as overall CO. The evil capitalists with their plot for world domination were Tim C, Richard and John. I spit on their jeans and rock and roll.

We spent a fair time planning what we were going to do before the game and came up with Plan A and Plan B (which essentially changed the main effort, unit boundaries and objectives depending on how things went). I am sure the US also spent ages on their planning. It was a nice bonus from doing the game remotely. 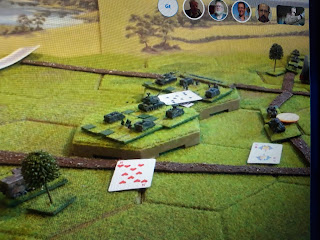 The action opened with a disordered US cavalry unit charging down the road followed by 1st GTR. It seemed the US had decided to hold Hill 401 in strength! 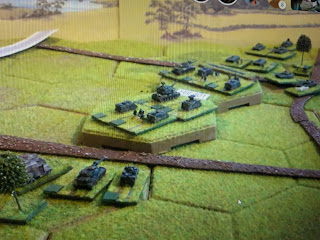 The cavalry reformed behind the revere slope while 1GTR put in a frontal assault on the defenders of the hill. As they were deploying AT missiles thinned the Russian ranks. 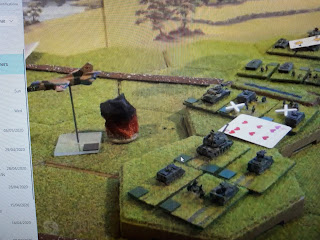 Return fire started to thin the US out too, and Soviet aviation arrived. The US seemed to have some sort of huge SPAA weapon on the middle of their position and it put our pilots off their aim. 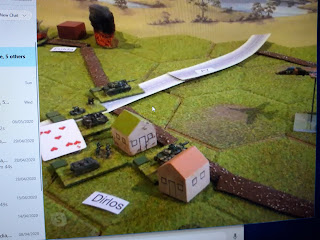 Meanwhile more capitalist deviants rolled up and parked themselves across the Autobahn. No doubt busy looking for some workers to oppress. These agents of imperialism seem to have brought some tanks with them. 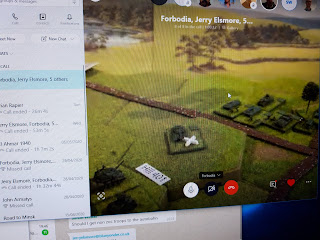 Back at Hill 401, a battalion of T64s smashed the defenders but took heavy losses in the process. 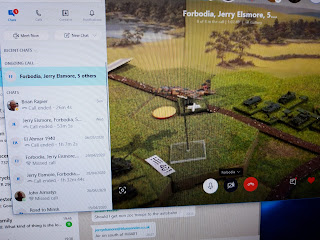 It fell back in disorder and a good job too as Soviet planes attacked the hex right afterwards... 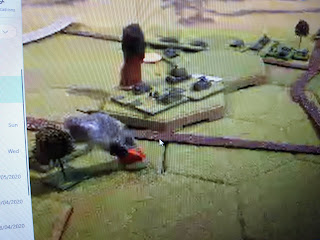 The US position was looking a bit shaky now. 29GMRR had rolled up and was infiltrating south, its artillery, mortars and Saggers taking the US under fire (hence all those big explosions). 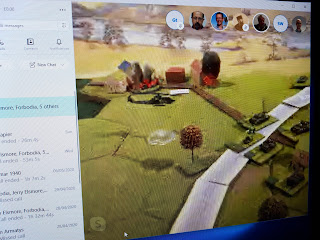 Back at the A66 junction some Cobras appeared, Fulda is burning gently in the background. Luckily the US helicopters had decided to shoot up the Tank Regiment instead of my boys. 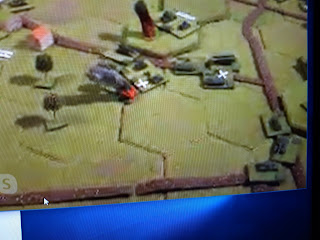 Back at my end of things, 20MRD HQ declared that it was time to activate plan B so my Forward Detachment put in an assault on Hill 401 in the centre to pin the yanks, while the rest of the Regiment piled down the southern road led by my T64 battalion and recce. 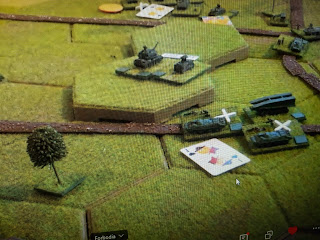 The weakened US Cavalry fell back before my advance, but the TOWs and Sergeant York hung. Sadly for them I drew a black card so it was a fire then move, mounted assault. 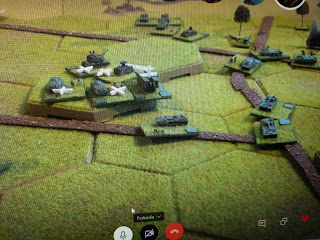 My reinforced MR battalion got stuck in and made short work of the remaining US troops on the hill. 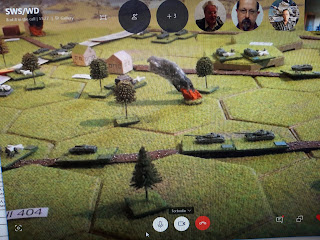 Down south the US HQ fell back towards Dorios while my T64s shot up the few remaining cavalry M60s. To my surprise a load of M113s came out of the woods and parked across the road. 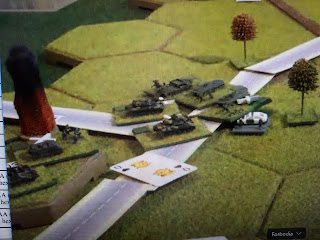 Back at the A66 junction, 1GTR committed its MR Battalion, shot in by Soviet aviation on the hill. 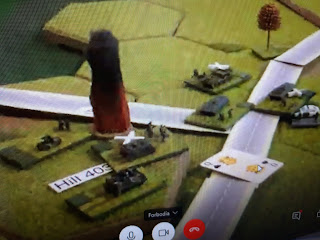 To everyones amazement it defeated the M60s and even squashed the West German police car. They did take crippling casualties in the process unfortunately. Close combat against defenders in good order is pretty unpleasant in NBC. 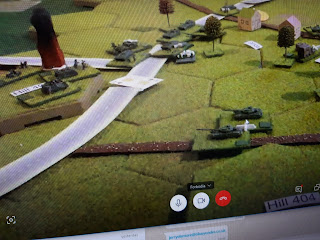 Meanwhile my leading tankers overran the M113s (the survivors from Hill 401), at which point the US forces bugged out as they were down to a couple of companies. 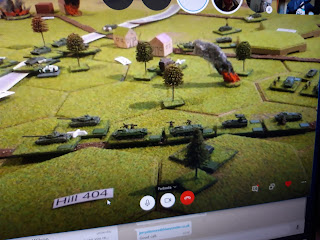 We still had two completely intact MR battalions to commit and they followed up behind my T64s. 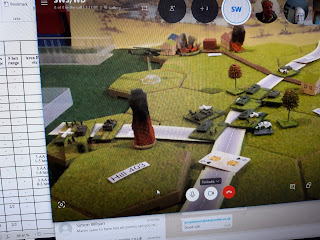 The A66 junction was now firmly in our hands so the way the west was open. Five days to the Rhine!

We called it at that point, the Sovs were fairly tatty having lost three tank battalions, and two MR and one Tank battalion damaged but they still had intact units to exploit with. The US were in a sorry state having lost at least six companies destroyed (they were aiming for a loss ratio of one Sov battalion per US company). I think those fight and run missions are really hard, the temptation is always to hang around too long. Someone wise once said that NATO tactics are fine in theory but very hard to pull off in in practice.

Getting the briefings early worked really well as we could do loads of pre-game planning, in fact I think we spent longer planning the game than playing it. As before the unit-at-a-time activation worked really well for remote play, and having the umpire manipulate the cards and dice also speeded things up. Nice to get back to the Central Front again.