As I noted in my post on the M16 halfrack, my Allies are a bit short of AA weapons, so on my medium term purchase list were some of the ubiquitous Bofors 40mm AA guns. They were used by British and US forces, and are close enough to Soviet 37mm AA.

Yet more purchases from QRF, who are very reasonably priced and include crew figures. 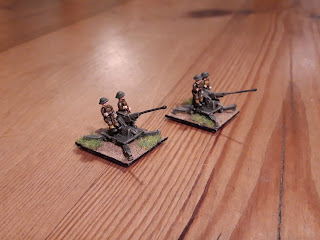 Here they are, ready to down some Heinkels. Unlike the QRF US artillery, these come as a pile of tiny metal pieces which need sticking together. They remind me of my Quads and 25pdrs, so I suspect that these are also old Denzil Skinner moulds. 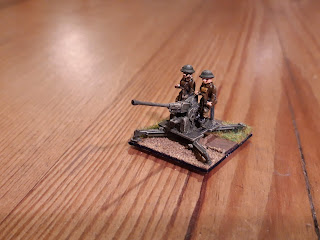 In fact they weren't too awful to put together, although I could have done without the separate cruciform legs. I used the gun platform as an anchor to stick everything to with piles of blutak and superglue. I didn't bother with the wheels, but I guess the guns are moulded in bits so you can model them as limbered or unlimbered. 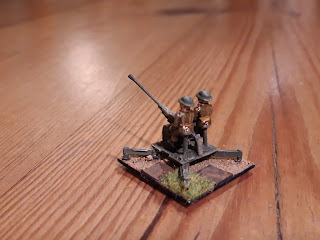 By doing the legs diagonally I managed to fit these onto my standard 30mmx30mm infantry bases. They aren't going to get used much so they need to take up as little storage space as possible. They come with four crew figures each, but again, to save on space I just did the seated gunners.

I'm not sure if the seats are meant to be that high, I've sat in a few naval 40mm AA mounts but the seats in those may have a different configuration. Unlike the Airfix version, these don't have gunshields so it is hard to make a visual comparison. Anyway, I'm not changing them now. 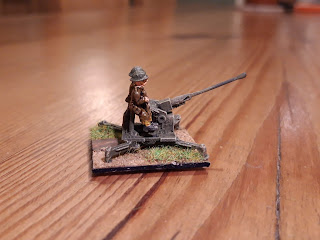 There is some nice moulded detail on the guns themselves, and the figures are fine. I wish they were done in sidecaps so I could pretend they were Russians too, but hey ho. I'm also not convinced gun crews would actually be wearing box respirators on their chests, but it makes a nice contrast with the khaki serge when painted. I just did the guns in khaki green so they will do for all (temperate) theatres of war.

So, there we are, a useful addition to the troops.