While kicking my heels at home (well, when I'm not working anyway) I got on with doing a few back burner projects.

For playtesting etc I tend to use the dining table, which is fine for occasional use but it is a bit narrow and now I'm home all the time and leaving some games set up for three days for remote running, I wanted something which was closer to the dimensions I need to One Hour Wargames and Command and Colours. I do have a 3' x 3' card table which is OK for some things but too small if you are trying to set up a camera etc.

When I was a kid I used to play on two pasting tables (which together made up a 6x4), and I was inspired by the games Phil Steele has been taking to shows with the terrain contained within re-hinged pasting tables. For most of the games I do now a 3x4 would be perfect, which just so happen to be the same size as two halves of a pasting table. 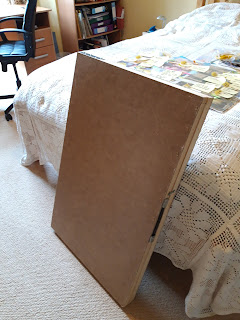 So, at first sight this looks like a standard pasting table. 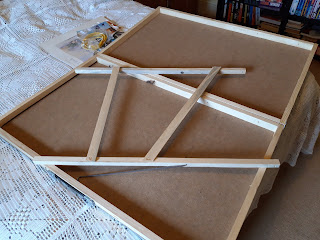 However, inside its legs are missing. It was simple enough job to take them out although as they were held in by pins and push fit clips instead of bolts, it needed a certain amount of brute force to get them free. I also took the hinges off, which was much easier as they were held in buy proper screws. 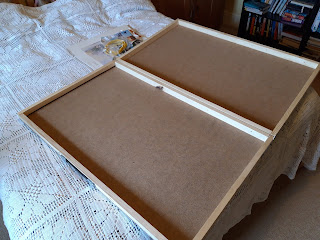 Then both parts were lined up side by side. 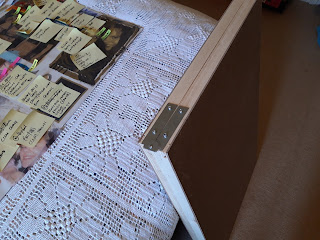 And I re-fitted the hinges on the long edges rather than the short edges. I left it hinging outwards as the little bit of overhang will help keep it in place while it lives on the dining table. 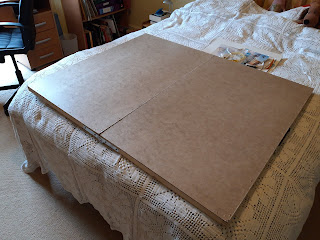 So the whole thing now folds out into a nice 3x4 table. If the hinge overhangs become a pain I'll switch them for morticed door hinges, but for now it seems to be fine. 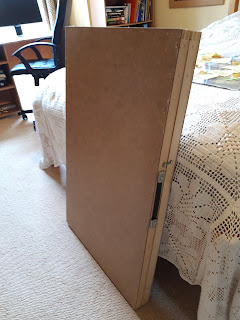 The whole thing folds away neatly for storage. The only other change I made was to move the supplied clip to the long edge. I left the carrying handle on as it makes it easier to move around. My wife is very excited as she pointed out that if it is opened the other way, it will be ideal for her 1000 piece jigsaws. Win-win!

My late war 37 pattern British webbing has been in a sorry state for a while, as it has been repeatedly soaked at various events over the years so I thought it was time to re-blanco it. I didn't scrub it back as I was feeling lazy, although this time I did mark the lengths of all the straps on the inside before taking it to bits. When it is set up it is a great bit of kit, far better than German webbing, but getting all the straps the right length takes quite a while. 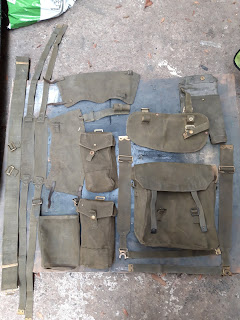 Having disassembled it, I scrubbed off obvious bits of mud and then applied a liberal coat of KG3 blanco using a cut down paint brush to work it into the material. It dried up really rather smart, so that was a good afternoons work. WW2 painters note how dark green KG3 webbing actually is. I usually paint mine in unblancoed tan, as I prefer the contrast with the khaki uniforms.

I also re-proofed my 'waterproof' rain cape as it has got pretty leaky. A good coat of Thompsons silicone water seal should sort that out. I'll find out next time it rains 'in the field'.

The previous occupants of the house decided  in their infinite wisdom that it would be a good idea to bolt chain link fence all over the stone wall on the west side of the garden. This is great for the climbing plants, but less great when it becomes infested with invasive ivy. I decided after 20 years that the time had come to get rid of it. 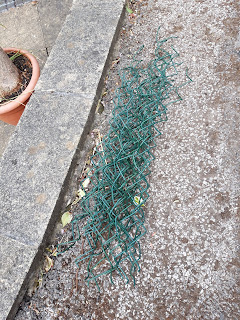 This is the stuff. As it was bolted to the wall and held in place with hang-glider rigging cable (!) it proved surprisingly difficult to get off with my big pliers and a crowbar, the idea of clearing many yards of it rapidly become very depressing. However.... 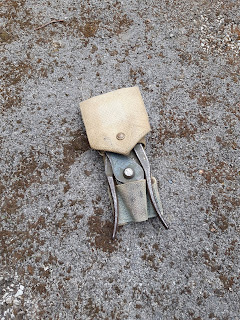 While sorting out my webbing I came across these. My WW2 British wire cutters, in their handy carry pouch. I occasionally carry them when badged up as Royal Engineers (my maternal grandfather was RE). Note: this type of equipment pouch wasn't usually blancoed, although some rebellious regiments did it anyway. Some helpful soul has blancoed the bottom half but not the pouch cover. 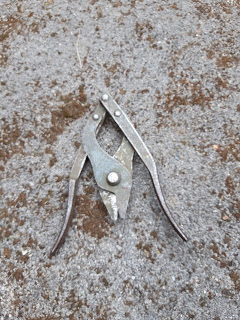 Extracted from their pouch, they suddenly look a bit more imposing. 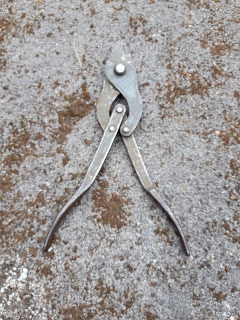 And they fold out into a rather impressive pair of wire cutters. They may be 70 years old, but they tear through that chainlink fence like a knife through butter. I knew they'd come in handy for something one day! The fence is now all removed and recycled.