I have various calibres of German ordnance, 20mm and 37mm AA, 37mm AT guns, 75mm AT and infantry guns, 88m Flak and 105mm light howtzers and recoilless rifles. What I don't have is any 50mm AT, the mighty Pak 38 which  helped the Germans immeasurably in Russia when they met the T34, and gave the British huge headaches in the desert. It destroyed far more British tanks than the 88s as it was vastly more numerous, and perfectly capable of making big holes in anything, prior to the arrival of the Sherman (well, maybe not a Matilda II). It also soldiered on in regimental AT companies until the end of the war, albeit increasingly outclassed.

So, my QRF order included a pair of Pak 38s, which as ever with QRF guns are amazing value as they include the crew as well. 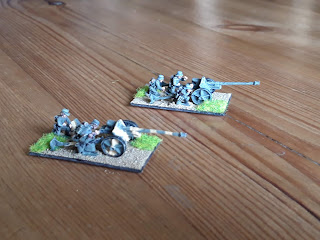 Here they are, ready to duff up some T34s or Stuarts. As regular readers will know, I'm not a fan of sticking teeny tiny metal guns together, so I was delighted to discover that these are single piece castings. Oh yes. 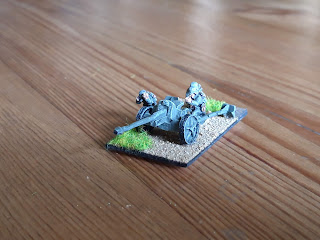 These probably aren't the best QRF castings ever. The gun barrels are long and very hard to get straight as they are quite thin. I'm also not sure about the size of these wheels, they look a lot bigger than the wheels on the Pak 38 in the IWM, but hey ho, it still looks smaller than a Pak 40 and most importantly, it is a single piece casting. 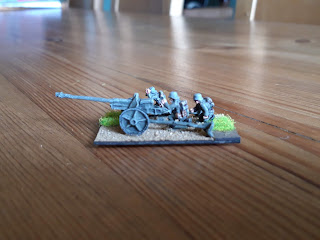 View from the side. I do like the variety of crew figures you get with QRF. These guys are all in helmets and very early/mid war looking to go with their field grey gun. The poses are very urgent, as if there really is a great big enemy tank in their sights. 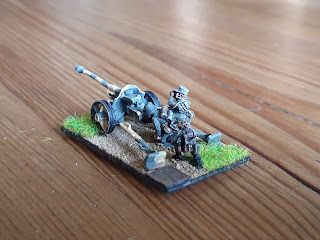 Whereas for the sand/field grey gun they are in a mixture of helmets and caps. Might by GJ or Afrika Corps, might be later war guys in field caps. I painted these figures in a mixture of field grey and reed green (which might also pass for unfaded tropical green). You can see the breech detail from this angle. I do like the way the gun sits, it looks very 'anti tank'. 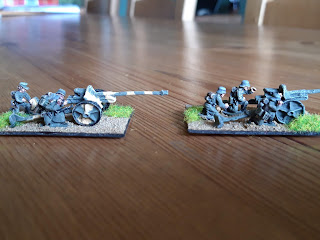 I did consider dong them both field grey, but in the end I added some sand disruptive to one. It might be mud camo applied in the Ukraine, it might be the transitional field grey/sand scheme used in early 1943, or it might be late war dunkelgelb and green (as Vallejo feild grey is RAL6006, quite a green shade). Anyway, they will do for the whole war, which is the main thing. A close of the later crew. I really like the kneeling crew commander with binos, a greatcoat and an MP40 casually resting on his knee. He'd do for a command or FOO figure too, but I already have plenty of those.

So, a nice little model with no assembly required and some useful crew figures. Recommended.