In our continuing experiments with remote gaming, Tim put on an old scenario we've played a few times before - the German para drop on the Corinth Canal during the invasion of Greece in 1941 (Operation Hannibal). This was run using NBC, which like OP14, also uses a grid which helps keep things oriented, as uses card activation for the units, so players get to go in sequence which keeps the feedback and freezing of comms down. 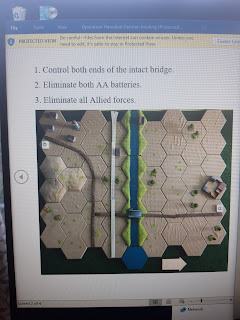 Jerry, Simon and I were allocated the Germans. Simon and Jerry had a para battalion each, while I got to run the regiment and a company of glider assault engineers. Our objectives are listed above, the bridge is pretty obvious in the photo. The real canal canal is a horrible gorge about 200' deep, and I certainly wouldn't fancy parachuting anywhere near it!

Pre game we had to pick out LZs. The glider engineers went for one company at each end of the bridge, while Jerrys battalion went for the hill in column 2, 4 hexes up and Simon for the clearing between the woods in col 7, 3 hexes up.

Tim C and Richard ran the British and Greeks, with John as brigade CO. We had no idea where the enemy were, we'd have to find out the hard way. 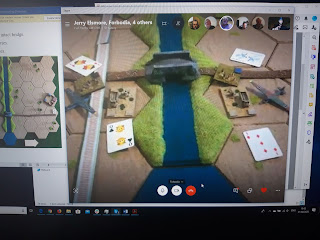 So, my engineers found the Bofors guns fairly fast, we managed to land right on top of both batteries! I've played this scenario before and I usually put the guns a bit further away, and it was just blind luck that I picked two LZs exactly where they were. Sadly, elite FJ assault engineers against surprised AA gunners wasn't much if a contest and the fight was fairly brief. Good job too as those Bofors guns are pretty nasty in a direct fire role and would have made the mission very hard. 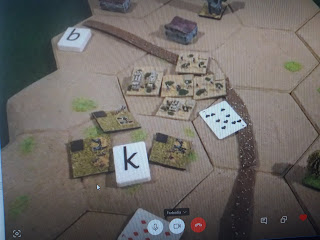 Over at LZ k, Jerrys battalion got down unscathed, just in time as a battalion of Greek infantry supported by Bren carriers and led by the Brigadier himself hove into view! 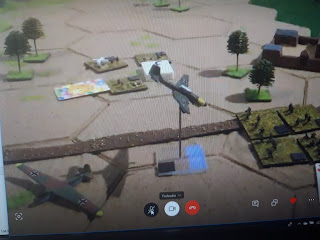 Over on the other side of the canal, Simon also got down in reasonable order but suffered a few losses in the drop. A rather scary bunch of ANZACs came piling down the road, but fortunately they were in clear view of the FJ engineers on the bridge who whistled up some of their other Luftwaffe pals. 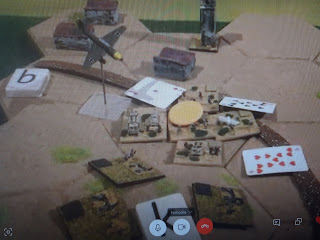 Things weren't going to so well for the Greeks. More Stukas turned up and they became disordered under withering small arms fire from the FJ. 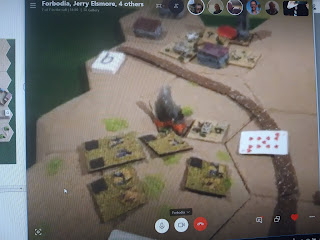 The dive bombers didn't inflict any losses, but they did break their morale and the Greeks routed back to Corinth, leaving the carriers on their own. The Brigadier withdrew with them to help reorganise. 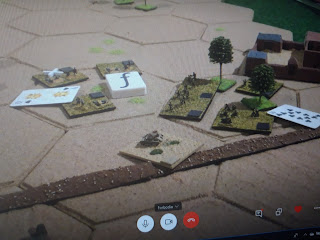 In the north the ANZACs shrugged off the Stukas and piled into the olive groves to assault the FJ. A squadron of light tanks rolled up to support them and things were looking a bit sticky for the FJ here as their heavy weapons hadn't landed yet. 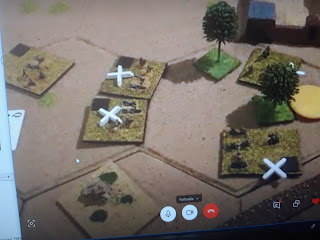 Sadly the FJ were far more effective in close combat and the ANZACs suffered very heavy losses, reduced to just two depleted companies their morale failed and they became disordered. The FJ counterattacked and and drove them off.

With all the allied infantry broken, we called it a day at that point. The Greeks could have reorganised, but didn't really have the time to do that and effectively contest the bridge. The Allies were unfortunate in losing their AA guns so early. It is certainly possible for the Allies to win, in some of the previous games the Germans have been virtually wiped out. Still, it was a good run through and the game mechanisms were a good fit for remote play, so I was inspired to design a new scenario myself. I've not played NBC in quite a while and I'd forgotten what fun it was.