Well, if I was going to get some H39s, I had to get some of their bigger pals and I finally succumbed and got a Somua. These also had an exciting war in both French and Germans service, but I can feel Arras calling to me again. 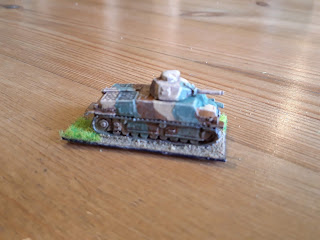 Like the R35 and H39, this is a lovely little model. Just hull, tracks and turret. It went together really easily with very little flash and the parts fitted well. One thing which did surprise me was just how small it was, I guess I'm used to later war medium tanks but compared to even an A13 this is on the small side. 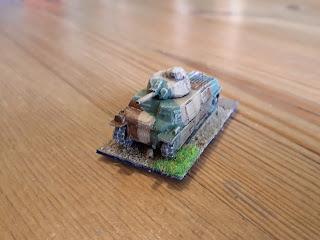 The hull has a very unusual shape, as does the turret, asymmetrical castings. I saw an article in Airfix Magazine where someone had scratchbuilt one of these. I really, really wouldn't fancy that! 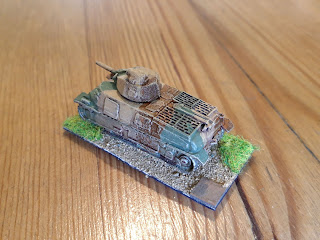 Oooh yes, nice big engine grills. Takes a wash and a drybrush beautifully. Not great if being attacked with Molotov Cocktails either I imagine. 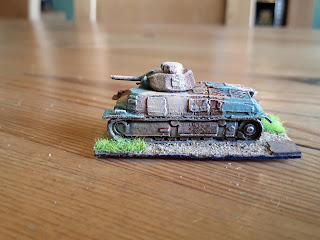 The roots of the running gear in WW1 tanks can clearly be seen here, it really is a very odd arrangement and puts me in mind of a Medium Mark III in some ways, but essentially it is a St Chamond with a turret on top.

I did this one in sand/green/brown, a perfectly respectable scheme for both France 1940 and France 1944 and similar to my Char B. It had and inkwash too which stained the sand paint a bit so I touched it up and it ended up producing quite a nice highlight effect. Maybe I should have got two of these, but I am sure one is plenty for now.