As I noted in my post on Bofors guns, they come with four crew each but I only used two. Where are the other poor gunners you cry? Well, they haven't been consigned to the spares box. My WW2 15mm British are a bit short of single based officers. I have plenty of NCOs, but they are majnly carrying SMGs and I wanted something a bit more officer like. 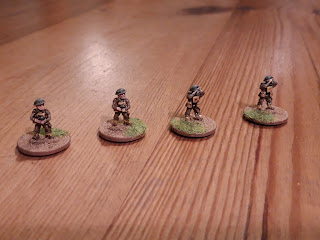 And here they are, a very handy set of officer lookalikes, even if they are bit webbing heavy. (The Bofors crew are all moulded wearing chest respirator bags, well I suppose you need to put your sandwiches somewhere). 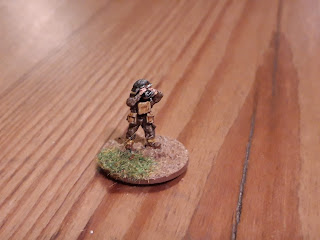 The bloke with binoculars is an obvious pose to use for an officer, and unlike the Airfix Bofors Gun equivalent, he is helpfully looking along the ground instead of up into the air. 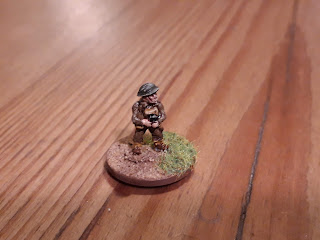 I think this chap is supposed to be holding a clip of spare 40mm ammo, but it is an indistinct shape and also easily paint converted into a pair of binos. He looks rather thoughtful. Do you think that is wise sir? 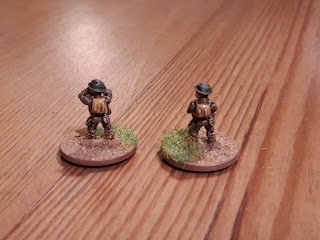 And here they are from the rear. They'v both got small packs, which seems a bit excessive for what were originally supposed to be AA crews, but perhaps they don't trust the driver with their gear. As (junior) officers they are fine though, trying not to stand out to snipers.

I just did them in standard khaki uniforms and unblancoed webbing as I think it looks better.