We'd played Johns One Hour naval game at the club before lockdown, and we all thought it would benefit from a grid to make navigation easier. John had incorporated some ideas from the Portable Naval Wargame, and lo and behold, Gridded Age of Sail was born. 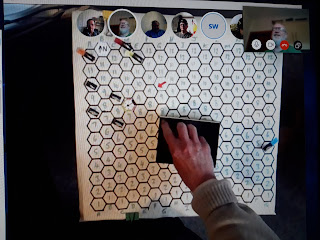 The scenario, the British are escorting a convoy from west to east, sadly the wind is from the NE so we are beating and a bit doomed from the start! The convoy has four merchant ships including an East Indiaman, while we had two frigates (myself and Tim C respectively) and a sloop (Jerry). Our job was to get the convoy off the eastern table edge or sink enough Spanish ships to claim a great victory. 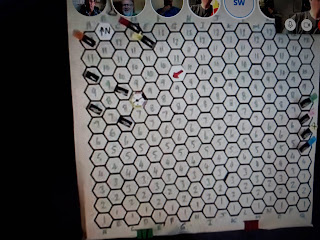 The Spanish came on reaching from the east, a frigate and three ships of the line. Oh dear. Tim G had the frigate, otherwise Richard, Graham and Simon had the liners. 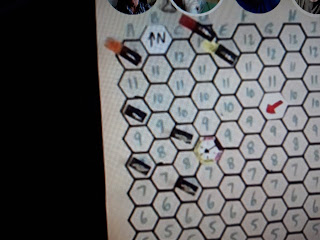 The British in close up, the merchants are at the bottom. Orange is Jerry's sloop, yellow is Tim C and red is the mighty HMS Galatea (me). The red arrow is the wind direction and the compass shows our movement relative to the wind. Beating into the wind means we go one hex per turn (plus an extra one for undamaged frigates). 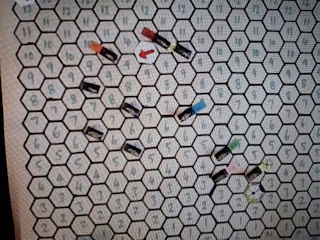 With the wind gauge, the Spaniards were on us in no time. We tied to stay to windward to gain and advantage over the Dons. 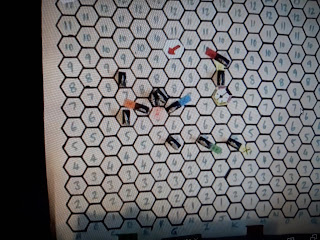 Sadly, three hexes per turn reaching with the wind beats two hexes into the wind every time, even for the RN and the Spaniards were in among the convoy before we'd even completed out turn. 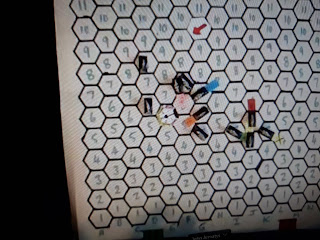 The Spanish frigate was soon grappled with the East Indiaman, the rest of us took on a ship of the line each. 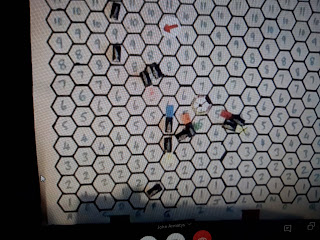 As might be expected, Jerry's sloop didn't come off too well from this, but it was very heroic as he sank beneath the waves. Tim managed to sail around exchange salvoes with the enemy but I got hung up on Grahams 74. Fortunately I'd managed a bow rake on him before grappling so we went in with better odds. 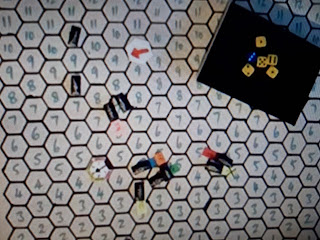 A somewhat confused action ensued. My chaps began to get the better of the Spaniards (I guess they'd figured out how to climb the side of the huge ship towering above us). 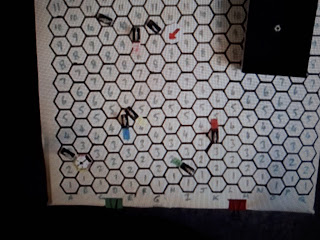 To everyones surprise, I managed to sink the Spanish 74 (I'd have preferred to capture it but hey ho). Sadly the Galatea was crippled by this action and drifted slowly south, barely under control. Jerry was long on the bottom and under close range fire from two Spanish 74 Tim C soon struck. 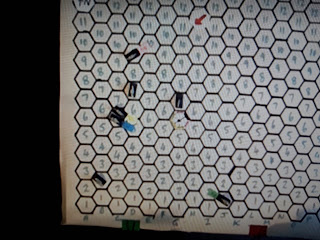 By now the convoy was scattered to the four winds and another Spanish 74 sailed over and sent my crippled frigate to the bottom. I'd have preferred to surrender my heroic crew but that didn't seem to be an option.

Rather than prolong the agony we called it a day there. The convoy was scattered, sunk or captured and all our ships had been lost, although we'd managed to take one Spaniard with us.

We gave the rules a good test out and all agreed that the grid made it much easier to keep track of what was where. The gunnery and sailing all worked fine. The only slight oddity was the number of ships sunk (very rare in this period) so we made some  suggestions on increasing the likelihood of ships striking once they were crippled, and John also added it as a captains option. Good stuff and I'd like to try it again.