As regular readers may know, I have a bit of a fascination with large scale set piece battles. Some years ago (possibly as long as 20 years ago!) I ran Operation Goodwood on squares using a very early variant of my Panzergruppe operational rules.

As a grid based game of limited geographic scope, I thought might work OK for remote play. I've also been playing around with various iterations of Panzergruppe recently and I wanted a test bed to try it out.  As it is the 75th anniversary of VE Day, I also thought one of the apocalyptic battles of the Normandy campaign would be appropriate. So, I dusted off my old notes and had a go at bringing them into the twentieth century. My collection of books is rather larger than it was 20 years ago, and we have the miracle of wikipedia to help too. So this time we don't have Crocker commanding the Canadians, nor do we have 43 Div leading the attack into Caen but we do have scary numbers of Panthers in 1st SS Panzer Corps. I blame that John Keegan.

I'd originally run this on squares using my 15mm stuff, but I had the bright idea of converting it into hexes to use my Hexon terrain. I went with a ground scale of around 5km per hex and half day turns, but even then it is all a bit representative and really the ground scale should be even smaller.

The battlefield ended up looking something like this. At one base per brigade, there is just room to deploy the eight Divisions of 2nd Army behind the Orne and in the Ranville bridgehead. 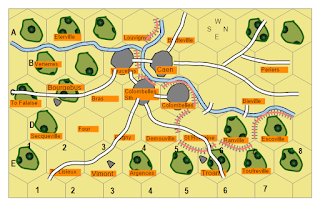 I heavily re-worked the briefings from the original as I'd relied at the time on a lot of active umpiring which wasn't going to work in a remote game setting. I also set the troops up for the players, whereas in a f2f game Id have let them do it. Having done the basic deployment they could tweak them beforehand.

Briefings, intel and setup below.

Once the Germans had confirmed their dispositions I also gave the Allies an intel update with the positions and strength estimates of the German frontline troops.

I can only apologise in advance for the formatting. In blogger cut and pasting text seems to produce all sorts of formatting issues which I'm seemingly incapable of sorting out.

Allied Briefing
Heavy fighting around Caen, and to the west around Hill 112 has resulted in very heavy attrition of our infantry strength. Field Marshal Montgomery has planned a major armoured attack using our fresh armoured divisions. The overall aim is to pin the enemy in the east to secure victory in the west [on the American front]. to make a limited attack to secure Caen with the potential for further exploitation, and attrit the enemy.

The only terrain suitable for the mass employment of armour is the Caen-Falaise plain south east of Caen. A Corps level armoured attack using VIIth Corps will be made from the bridghead over the Orne. The armoured units will be supported by IInd Canadian Corps and 1st Corps. The RAF and USAAF will lay on 2,000 bombers to blast a hole through the German defences.

The enemy have three second rate infantry divisions holding the front line, with 21st Panzer Division, 1st and 12th SS Panzer Division in reserve with around 200 tanks. All these units have been badly mauled in recent fighting. IInd SS Panzer Corps is holding Hill 112 to the west, and 43rd Div will put in a pinning attack.

II Canadian - Operation Atlantic Objectives
1.Take and secure the communications node of Caen and the surrounding area, in particular  Colombelles and Vaucelles.
2. Once Caen is secure, push on to Veriers Ridge.
VIII Corps: - Operation Goodwood Objectives
“Every attempt will be made to write down enemy personnel and equipment, and VIIIth Corps can crack about as the opportunity presents itself in the direction of Falaise”.
1. Armour will establish itself in the area Bourgebous-Vimont. Objective Vimont-Bourgebous.
2. Once the line Vimont-Veriers is captured, armour may exploit south along the line Veriers-Falaise-Secqueville
I Corps: Capture the Troarn Heights to to secure the eastern flank of the bridgehead. Objective Escoville - Argences 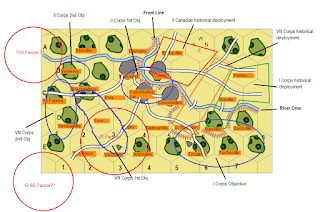 Logistics
Supply sources are roads leading off the northern edges. All units have standard supplies on transport. The congestion in the bridgehead is immense and crossings of the Orne very restricted so no artillery units can cross the Orne. 1st Canadian Div has suffered heavy losses and needs to re-fit.
There are 300 replacement tanks in reserve (6SP) which can be used to replace armour losses. 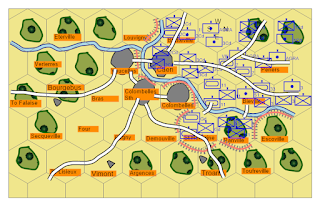 German Briefing
In recent weeks the heavy fighting to the west of Caen has died down in intensity, although many of our units have suffered heavy and irreplaceable losses. The arrival of fresh infantry divisions has enabled us to withdraw some of our Panzer divisions from the front line to refit. Intelligence indicates the movement of large enemy armoured formations around Caen. Their likely avenue of attack is through the narrow corridor of clear terrain leading south..

The front around Caen is held by three infantry divisions (272nd, 16th Luftwaffe and 346th) although these units have little offensive potential. In immediate reserve are 21st Panzer Division in the area Bourgebous-Vimont and 1st SS LAH south of Caen.


A battlegroup of 12th SS Panzer Division is refitting around Lisieux but this is currently attached to panzer Group West. It may be released if the situation warrants it. The remainder of 1st SS LAH and 12th SS HJ remains in support of IInd SS Panzer Corps around and west of Hill 112. Considerable Corps artillery assets including 270 Nebelwerfers and an entire Flak Corps have been moved into your area and the 503rd Tiger Bn is attached to 21st Panzer Div and 101st (SS) Tiger Bn is attached to 1st SS LAH.

IInd SS Panzer Corps is holding Hill 112 to the west.

Objectives
Hold Caen and the Troarn Heights for as long as possible and prevent an enemy breakthrough in the direction of Falaise. Destroy any enemy penetrations with vigorous counterattacks whilst keeping our panzer divisions intact. 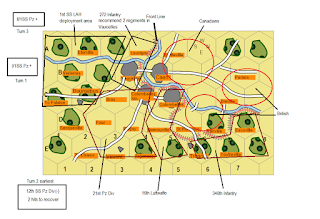 Terrain and weather
The Orne is a minor river is bad going for movement/supply.
The broken ground is bad going for all units.
The weather is overcast and unsettled, air operations are possible but at reduced effect. 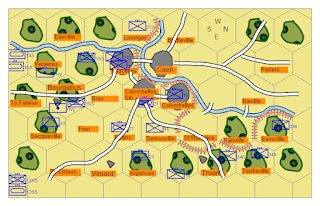