The Americans have been having all the command vehicles recently, and as I was putting an order in I thought I'd give the British a go. QRF do a nice looking Bedford Radio truck so I ordered one of those. 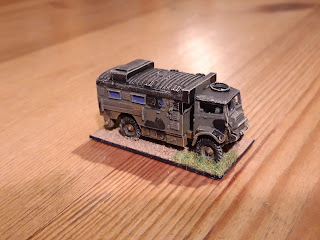 Unlike the other QRF trucks I own, this one had a lot of parts. It reminded me of the QRF 25pdrs and Quads, and I wonder if this truck is also one of the old Denzil Skinner moulds. Thankfully it went together very easily and the parts fitted well, even the cab roof. 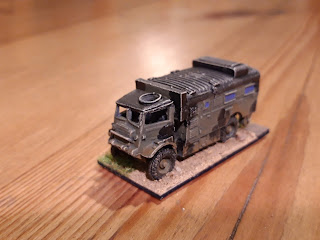 It has lots of nice raised detail. Strangely, this is actually painted khaki green with black disruptive, but in the photos it looks more like SCC2 chocolate brown. I wonder if I've got a wierd filter on my camera? It looks OK though. 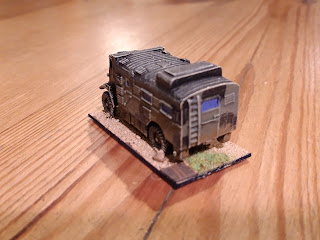 Rear view. I did the windows as glass although I suspect they were painted over in the field. It has some lovely detail for such an old model, including cable reels under each rear side of the body. 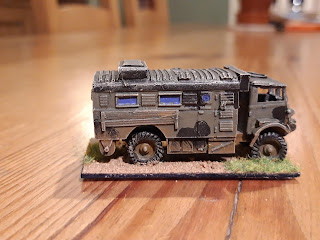 It sits a bit tail heavy, which seems appropriate for the huge caravan body. I painted it in Mickey Mouse camo, as it is a scheme I have a certain fondness for, although most of my British trucks are boring green. The ribs gave a nice contrast to the matt black scheme on the roof when it was dry brushed. I'll do the glass highlights on the windows at some point but that is good enough for now.