After playing around with the Portable SCW, I thought I'd inflict my modifications on my long suffering gaming group. I wanted to run the Turning Point mini campaign as two back to back battles, and as it so obviously based on the Teruel campaign I retrofitted the historical OBs onto the anonymous ones in the rules, and assigned the correct historical personages to the commanders. I'm not a huge fan of anonymous battles, I like to 'bring history to life'.

We had three players for each side, Tim G, Russell and John were the Nationalists, while Tim C, Simon and Diego took the Republicans. 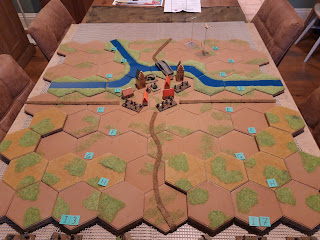 Battlefield from the south (I changed the map orientation to work better with the camera). Teruel in the centre with the Rivers Guadalaviar and Alfambra behind. It really is a very exposed position, but sits on two roads to Valencia. The ground should be covered in snow as it is December 1937, but I don't have any snowy Hexon, so arid will have to do. 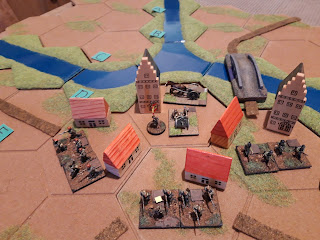 The Nationalists garrison. A battalion each of Requetes, Guardia Civil and Regular Army supported by a mountain gun. Irl the garrison was commanded by Colonel Rey d'Harcourt. I'm using ammo limits for artillery or the game just degenerates into in a dull artillery duel. The units were rolled up as average except the Army unit which was poor. I rated the Colonel as average, which gives +1 on the initiative throw. This is an important mod as I let the winner of the initiative roll choose which side goes first as opposed to the winner going first automatically. 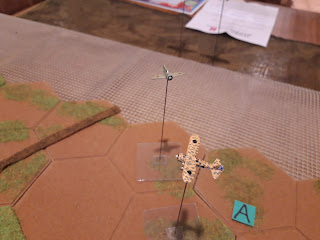 The Nationalists had partial air superiority, so I dug out some of my old 6mm SCW planes and had this Rata and CR32 duelling away. 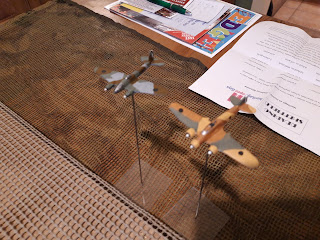 Rather more substantial were the two Nationalist air strike markers. An SM79 and an early model He111, both in Nationalist markings. 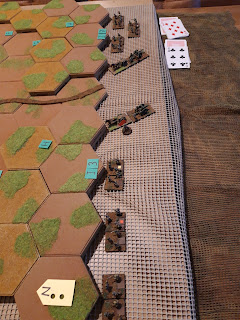 The Republicans. Historically this was Listers 11th Division, one of the best units in the Republican Army. Lister was also an excellent commander, so I rated him as good (+2 initiative). The rest of the troops are two Popular Army mixed brigades and a couple of artillery gruppos. Students of the original scenario will note the MG units are missing. I don't think they are appropriate in a brigade/division level game in this period, so instead I just add the extra six dice of firepower to the infantry battalions (so they shoot with two dice). This only applies to well armed units, so militia etc only get one dice. For battalion level games I'll keep the MG companies.
Being Popular Army troops led by a Communist commander, they also don't have to make any activation throws, which is one less thing for me to do. The Republican high command were keen for this to be an 'All Spanish' battle, so the International Brigades did not take part in the assault on the city. 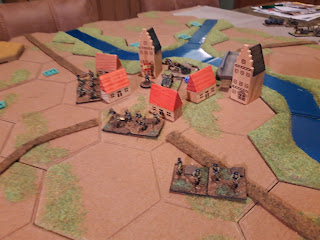 The action opened with the Guardia sallying forth from the city to set up an observation post to spot the ridge. I restricted spotting and direct fire range to three hexes (as these are notionally 1km hexes). Another mod to stop artillery direct firing at stuff 12km away. 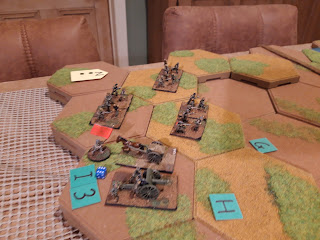 11th Div came on with its Mixed Brigades in inverted wedge formation. One artillery gruppo unlimbered for indirect fire accompanied by Listers HQ. Each artillery piece has enough ammo for six fire missions (shown by the little blue dice). 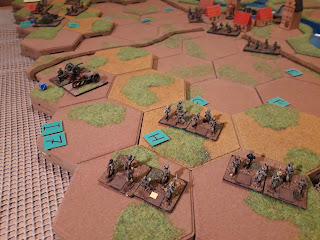 Diegos brigade came on the other flank, supported by the other gun.  In the original scenario they set up in the hills, but I wanted the players to get the hang of movement. It is also really hard to coordinate complex unit setups beforehand in remote games as it relies on the player teams doing some advance planning and they don't always have time to do it. Easier to let them march their stuff on. 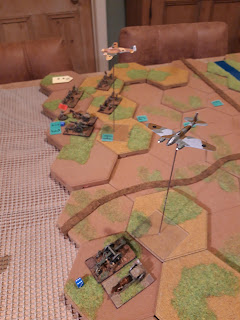 There aren't any restrictions on airstrikes in the Portable SCW, so Tim whistled up his bombers to pound the Republican guns while they were unlimbering. The SM79s failed to find their target and aborted. 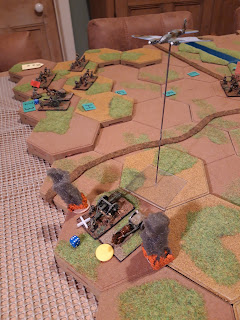 The Heinkels however rained death and destruction on these unfortunate gunners (two hits!). They took a hit, were pinned and also forced to retreat. I could have been unkind and said they couldn't retreat, but that seemed very mean. I've no idea if retreating artillery are treated as limbered or not. In this instance I decided they were, but I think that may be wrong as it means they can just move back again the same turn. 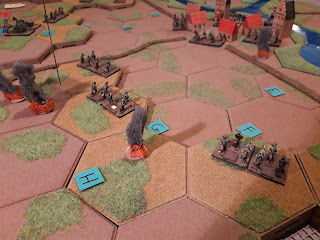 The Nationalists shelled Diegos brigade, forcing one battalion back, who then retraced their steps when they were activated. The whole brigade now lined up along the ridge line. The Guardia also came under shell fire and hastily retired back into the city. 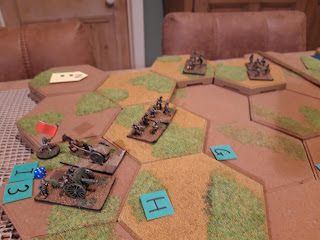 Tims infantry did the same thing on the other ridge and moved up to line the edge. The Italian bombers once more failed to find any targets. 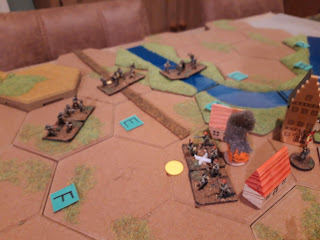 The Republicans started shelling the town in earnest now. The Carlists took a hit and were pinned, so Tims infantry closed in from the west behind the barrage. Their advancing fire was ineffective (moving and firing against a target in cover needed 6 to hit). 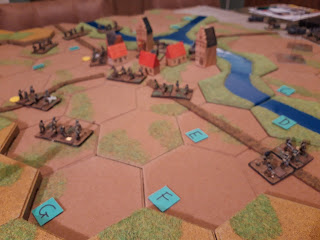 Diego outflanked the town from the east as well. The Guardia emerged once more and managed to hit and pin one of the Popular Army (EP) battalions. As these are battalions, I've dropped the direct fire ranges to two hexes for most things. The Italians finally found their mark and completely missed, scattering bombs all over the countryside. It all looked very impressive, and the Times journalist covering the battle from the Nationalist side wrote about it very enthusiastically. This was one Kim Philby, who later became famous for rather different reasons. 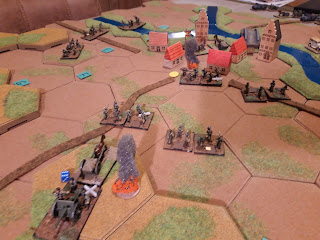 The Republican gun which had earlier retreated now re-appeared, and was shelled as it moved into position. The Republicans closed in on the town from all sides and the Carlists succumbed to massed rifle and MG fire from an entire brigade. Pinned units are very vulnerable to damage in the PW as they can't retreat, and I'm not sure what I think about that for a game at this level. 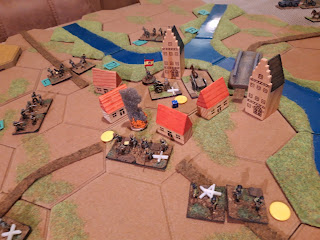 Things are getting very sticky in the town as the Republicans close in. One battalion has even crossed the river and has brought the Nationalist artillery under direct fire. The Army battalion and Guardia are both pinned and have taken some losses, as has the mountain gun. To add insult to injury, Colonel d'Harcourt was wounded in the hail of gunfire. I use the leader risk mechanism from the Napoleonic set, as it seems more realistic than the standard SCW PW mechanism. 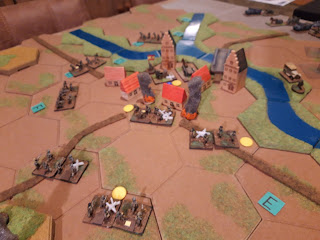 Republican artillery concentrates on the Army troops now, while the firefight continues around the town. Just visible across the river is Kim Philby in next to his reporters car. The Nationalists have reached their exhaustion level, but the Republicans have a way to go yet. 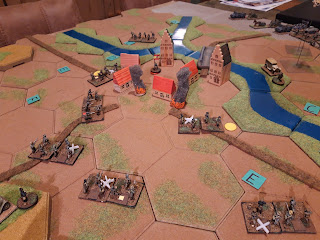 The Nationalist guns and the Army battalion are destroyed, just the Guardia left now. Just visible in the bottom left is the Republicans very own journalist, a certain Mr E Hemingway (who turned up in the middle of the battle with a couple of NYT reporters). He is sitting on the ridgeline no doubt nursing a hangover. 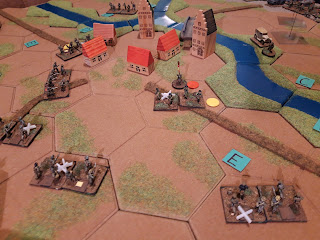 In a final flourish, Col d'Harcourt joins the Guardia Civil as the Republicans enter the town from the west. His leader bonus is enough to allow the Guardia to inflict another hit. These boys can really shoot. 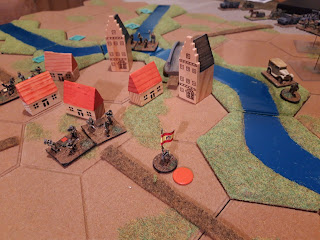 The pinned Guardia finally collapse as an elite EP battalion assaults them, leaving the Colonel on his own. With that we called it a day (the Colonel was taken prisoner in the real battle). 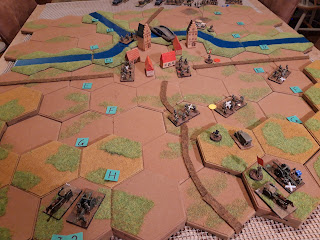 Lister surveys the final position. The town has fallen, albeit with heavy losses as there are only two undamaged Republican units left. This was the 'Spanish Only' victory the high command wanted though, with none of those interfering foreigners from the International Brigades.
I've played this scenario four times and now, and I can't see any way the Nationalists can win it. It is just a question of how quickly they are destroyed (seven turns being the longest, five turns the shortest). The scenario as written says the campaign ends at this point, but irl the Nationalists dusted themselves off and mounted a huge counteroffensive in February 1938, so we will just go ahead and play the counterattack anyway.
That all played OK, we rattled through the whole thing in one hour and fifteen minutes. The rules all seemed to work fine, my only slight hesitation being how to treat retreating artillery (as limbered or unlimbered). On reflection, I think limbered, but it just can't move again on the turn it retreats if it has already fired.
Next instalment coming soon!