As I wasn't ready to put my planned game on, John instead ran the Battle of Albuera using his squared version of Brown Bess. Although I've read about Albuera, it isn't a battle I've gamed before so I was looking forward to it.

The Allies were Tim C (Beresford and the British), me (the Portuguese) and Russell (Blake and the Spanish. The wicked French were Tim G (Soult), Simon and Jerry. 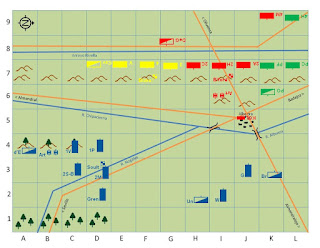 It is quite a complex battlefield, bisected with many rivers, which in this case, were all fordable. We had a nice ridge to stand on and in the historical setup Beresford positioned his troops to cover the main road and crossings. Blake had just arrived and set up on the flank.
Wily Soult conducted extensive recce and the poorly concealed Allied dispositions were blindingly obvious, so he mounted a demonstration against the town while putting the bulk of his troops around the Allied right against the the Spanish.
This is where we picked up. 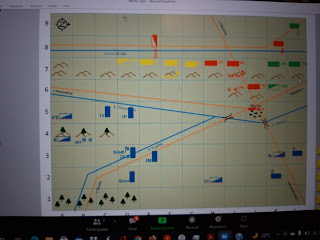 On the first turn, the French pushed forward on their left, and shuffled across a bit on their right. They seemed very nervous of the Allied guns behind Albuera. The Allies meanwhile started shifting their reserves across to their right. In my case that meant shuffling Coles mixed British/Portuguese onto the road and forming up in match column. 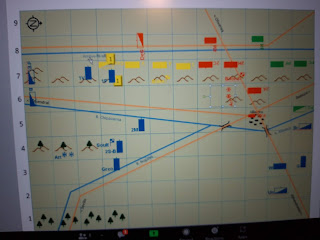 Things hotted up a bit next turn as the leading French columns tore into Blake. My chaps speeded up their march along the road, preceded by the British cavalry. Over on my left Jerrys cavalry demonstrated north of Albuera and the Portuguese cavalry engaged them. So far the Spanish were hanging on. 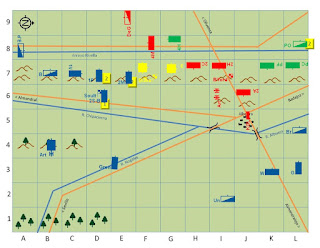 By the end of turn three one of the Spanish divisions had routed and the French were thoroughly in control of the south end of the ridge. They had sustained considerable disorganisation however and the Soult ran around helping the troops to rally. Jerry had meanwhile got the better of the Portuguese cavalry who fell back behind their infantry to reorganise.
The Allied reserves were now in position and deploying behind Blake. 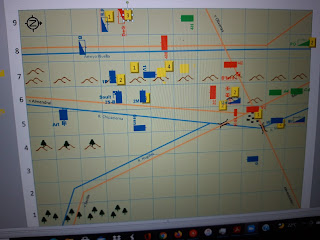 The resucitated French now attacked along the entire line. The French diversion piled into the Albuera position and the defenders responded. Unfortunately Jerry managed to slip his Polish Lancers in and overran the Allied gun line from a flank. Over on the French left, things got a bit sticky as they ran into the British and Portuguese units. The British cavalry were routed, but so were one of the French cavalry and an Infantry brigade. The impudent Lancers were surrounded an annihilated, but Jerry's last cavalry unit overran a Portuguese infantry unit in line. The French infantry trying to attack Albuera suffered brutally and a brigade was routed. 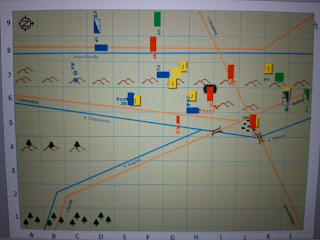 The French diversionary force was completely routed, and Beresfords redcoats routed another French infantry brigade. Jerrys cavalry were still rampaging north of Albuera, but like the Lancers, they were now surrounded and engaged by the revived Portuguese cavalry.
We called it a day at that point as the French attack had run out of steam despite heavy Allied losses. By and large it replicated the historical result. Soult gave up for the day and withdrew, while Beresford wrote a gloomy despatch to Wellington, who responded "This will not do. Write me a victory".
That all went fine and we've played BB plenty of times. I'm a little uneasy about the squared version as it produces some oddities in Napoleonic warfare - units which melee also get to magically enter the enemy square and appear on the flank of any supporting units without any ability to respond, and the unit facing is very all-or-nothing. On the tabletop version these issues don't arise as the physical location of the units is very obvious and units can deploy obliquely. I don't really know how to fix it without a ton more rules about geometry and the squares work fine for linear warfare. It is just the more fluid Napoleonics which have a problem. I suppose you could let units face 45 degrees, but that would add a whole load of other issues. Anyway, it is good enough for now.