John has been working on a Cold War version of the PW. It is quite extensively modified but keeps some of the original core (turn sequence, SPs, hit/retreat/pinned outcomes). Like me, John prefers defined unit seizes and ground scales, so this has company sized elements and 500m hexes, so it is pitched at a similar level to smaller NBC type actions.

The playtest game pitched the advance guard of a Soviet Motor Rifle Regiment with a Motor Rifle Battalion, Tank Battalion plus regimental assets and an entire three battalion Regiment of artillery in support versus a British Battlegroup with a Mechanised Infantry Battalion supported by a squadron of Chieftans and a single Regiment of M109s. 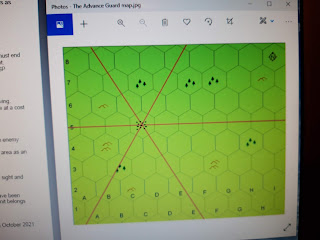 The ground. The British were defending the left, an area approx 4km x 4km, which was the general area allocated to a Battlegroup defence, in the absence of a high nuclear threat. 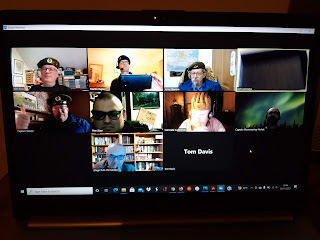 A large and as it turned out, rather chatty and raucous crowd turned out for this one. Simon, Mark, Jerry and myself were the Brits. I had the Chieftans, C Sqdn, 4 RTR (so I've got my RTR beret on). Tim, Russell, Diego and Nick were the wicked Russians. 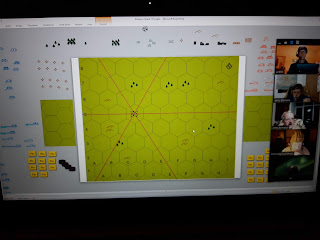 Apologies if the screenshots are bit hard to see. Since I retired I've had to give my old work monitor back , and this one is a bit smaller. We played this with the British deployed hidden, but basically we had a rifle company in each of the obvious two woods, with a third in the town. The battalion AT platoon (with Wombats! it was 1975) was in the northern wood. My Chieftans came on later and had a range of handy hills to pick from to assume hull down positions. 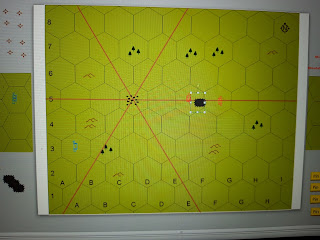 The Russian recce elements (PT76 and BRDM platoons with 1SP each) came on, so we stonked them with artillery. Unlike standard PW, it is one combat dice per SP, so our three battery regiment rolled three (rather ineffective) dice. My Chieftans came on and skirted behind the wood heading for the hills at C2. 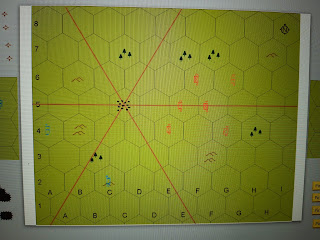 More Russians appeared, a company of T62s and one of Motor Rifle troops. These Soviet units had 2SP each (representing ten tanks or BMPs respectively). 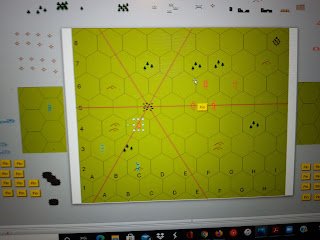 Apart from artillery and mortar stonks, the Russians were largely out of range of our infantry, which could only fire one hex. My tanks however had a maximum range of 5,000m, with an effective range of 2,500 (or five hexes). With 14 tanks in the squadron, they warranted 3SP, so 3 dice of 120mm engaged the T62s on the road. Half of them were knocked out (1SP loss) and the rest pinned.
Unlike standard PW, John was using a gun/armour chart in WRG style. The Chieftans could shoot through pretty much anything at any range though, so no worries. Lesser guns were subject to the indignity of a target saving throw. 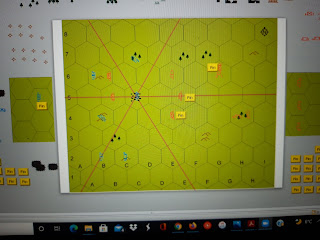 Much to everyones surprise, the Soviet recce drove right through our infantry positions and started overrunning the Blowpipe section positioned in the rear. This prompted a lengthy discussion about deployment doctrine, unit density, opportunity fire and Zones of Control. Meanwhile on the rest of the front our artillery and mortars, supplemented by the tanks, were holding off the Russians, but more and more stuff was coming on. Their mass of artillery managed to pin our guns, which seriously hampered their fire in future turns as there was never time to try and unpin.
Overnight, there was some email discussion of the days play, and some revisions made to assault and zones of control. Play resumed the next day. 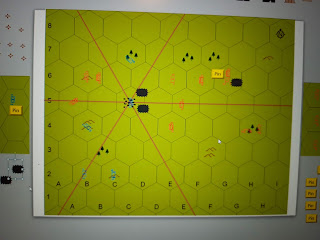 Following a heavy artillery stonk, Russells entire MR battalion now assaulted the town, mounted in their BMPs. This demonstrated very rapidly that AFVs are hugely vulnerable to dismounted infantry in BUAs as they suffered heavy losses and had ot retreat. The pinned survivors were largely picked off by direct fire from other elements.
I was a bit surprised they didn't dismount before assaulting, which would have made a big difference. Things were suddenly starting the look better for the Brits. 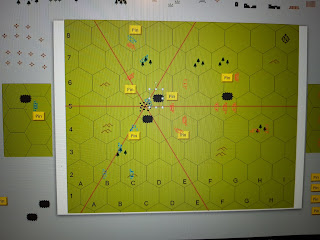 The Sov recce elements continued to rampage around our rear areas, and there wasn't much we could do about that. Even our BG HQ was pinned in the confused fighting. More serious was the full battalion (6SP) of T62s who came piling down the road. There are no stacking limits, and obligingly the whole battalion parked in a single hex, which of course made an amazing artillery target. The Royal Artillery duly obliged and stonked the lot, spreading carnage and pin markers among the massed armour.
Meanwhile I finished off the T62 company we'd engaged earlier (I'd been distracted trying to whittle down the BMPs). 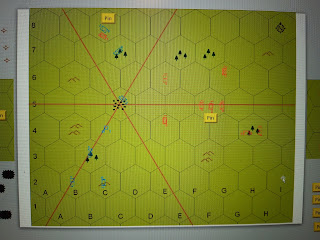 The Soviet attack was now quite fragmented. Sadly the Wombats went down to a PT76 charge, but the remaining T62s straggled into the town with no great hope of success and we called it a day at that point.
That was a really good playtest session. I think Johns revisions have a lot of promise, and we tested some of the mechanisms to destruction. With some minor revisions it is going to be really good. One change I would make is to the turn sequence and is the same as I did for the SCW game - instead of forcing the winning side of the initiative roll to go first, I'd let them choose. The former method is fine for solo play, but for face-face I think the players need a bit more agency.
Posted by Martin Rapier at 01:54