Before I went away I made some progress on my 6mm Napoleonics. For the first step I decided to focus on getting the Napoleonic figures back into useable elements without worrying too much about their rather ancient paint schemes!

This was essentially the tedious job of prising them off the existing bases, reorganising them into sensible units and then sticking on their new bases. This process would also show up some gaps which needed to be filled, but fortunately I still have a moderate sized box half filled with even more  ancient Napoleonic figures of various types (including an embarassingly large number of Polish Lancers and Imperial Guard Grenadiers!) 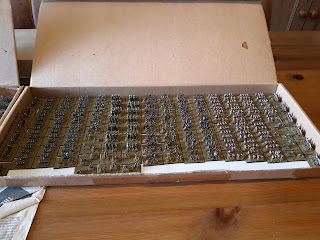 After a few days, I ended up with the British, French and Prussian infantry and cavalry. Everyone is one 30mm x 20mm bases, so the same size as my recent ACW stuff and the on the same frontage as all my nineteenth century stuff - which means I can use my 1860s Austrians, Italians and Bavarians as supplementary units. In 6mm the uniforms look virtually identical to their Napoleonic counterparts, as do the flags.
I was slightly tempted to go with 25mm x 25mm but in the end decided against it. The main thing was getting the infantry in two ranks, which gives a lot more flexibility in terms of representing different types of elements - some of them had skirmishers as the first rank, some were just close order infantry, and the command elements also occupied various positions. 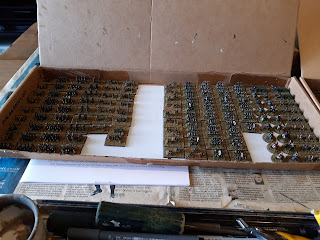 The other box has all the Russian infantry and cavalry, plus everyone's guns, leaders and wagons, limbers etc. In total there are 248 individual elements with around 1,400 figures and 25 guns. It isn't a huge collection by any standards, but adding in the useable nineteenth century figures adds considerably to that. I'm also fairly liberal in terms of swapping cavalry around, one bloke on a horse being much the same as another in 6mm, and there are 54 elements just of Napoleonic cavalry, plus a load more in the nineteenth century box (who again, are wearing uniforms virtually unchanged, especially the Hussars and Cuirassiers).
In the main I've gone with notional units of 3-4 infantry elements or 3-4 cavalry elements, but I tend to mix elements up for higher level games where formation strengths are so varied. A typical infantry 'unit' has four bases each of eight figures in two ranks, one of which is a command base with officers, drummers, flags etc. The cavalry elements have four figures on, purely for convenience as that is the standard Irregular 6mm cavalry element size.
The elements are deliberately set up so there are gaps at each end - contemporary sketches show that units always had gaps between them, not a wall-wall line of troops shoulder to shoulder so beloved of wargamers.
Next job is to review the paint jobs on the figures. Many of these haven't been touched for 40 years, I've learned a few tricks since then and we have access to much better uniform sources now.