We were short of a game so Tim resurrected one of our old show games from 2014, the infamous Doodlebuggers!

This is a quick solo game which covers the attempts by the RAF to shoot down V1s before they hit London.  There were four of us to play, so we just took it in turns. 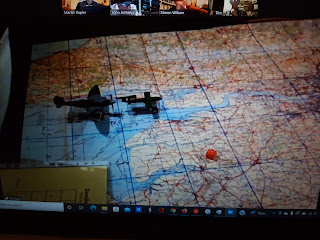 The board is a map of the Thames Estuary divided into a large grid. The player has a fighter (either a Spitfire Mark XIV or a Tempest) and has to try and shoot down as many V1s in ten minutes as possible. The V1 advances somewhat erratically across the map and the fighter attempts to shoot it down or flip it before it lands on London. 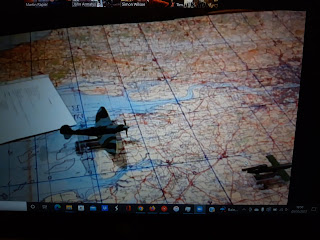 John was first up, and in this case the V1 has rather got away from him. The fighter can opt for maximum boost to advance two squares, but there is a risk of engine damage. 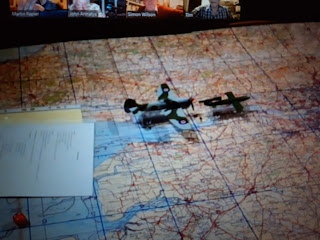 I had the next go and opted for a Tempest instead of a Spitfire. Here I am hosing down a V1 with cannon fire.
I'd hoped to try and flip one, but instead just damaged my engine trying to do it. I did manage to shoot down four of them, unfortuately the last one exploded right in front of me and damaged my plane. It crashed into the ground while I was still trying to get the canopy open. Oh dear... 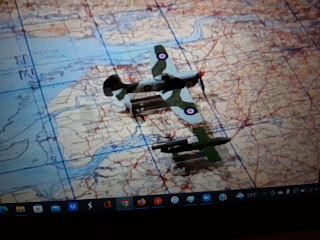 Simon showed how it was done, managing to flip this V1 using his wingtips. Much safer than shooting at them. Hilariously, he also managed to blow himself up later on, shooting a V1 up.
By the end, the only survivor was John, but at least we'd saved London from a dozen V1s.
I'd forgotten what good fun this game was, and in the post game washup we realised that quite a few of our show games would make good Zoom games as well, so watch this space.