In keeping with this months Eastern Front theme, this was a WW2 Airsoft game organised by Gunman Airsoft at their Norwich site in February 2011. It was quite cold! It covered the opening days of Operation Barbarossa, and I played as a Russian in this one (the first outing for my Soviet impression). I was surprised at how effective the Soviet khaki was in woodland, it seemed to acquire a greenish tint from the surrounding trees and blended in very well whereas under artificial light it can most charitably be described as 'poo brown' in shade. It also got rather wet at one point and the Soviet rain cape (the plash palatka) proved to be extremely waterproof indeed. The biggest sartorial disaster were the puttees which fell down constantly, but so did everyone elses. I have subsequently acquired some high boots. 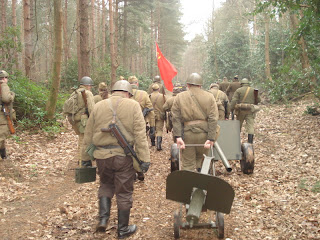 Soviet infantry trudge up to the front dragging their Maxim and 45mm AT gun. The AT gun was a blank firing dummy (but very loud) and the Maxim was home-made. 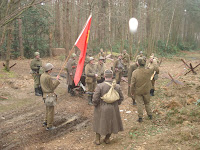 Planning the defence and setting up obstacles. The Germans  had demolition charges to destroy the tank traps. 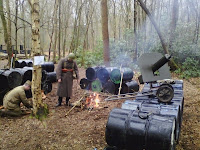 Time for a brew in the fuel dump! Not much concept of fire safety in the Red Army. 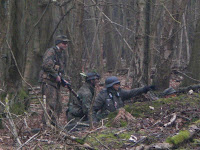 Sneaky Germans start to appear along the border. 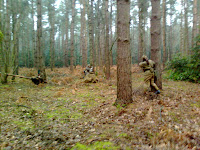 Fighting breaks out in the forests. 'Action' shots are very hard to take in Airsoft games and often look rather under-whelming, but these two capture the sense of desperate urgency quite well, although it still looks like a few people hiding behind trees. 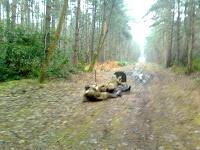 The Maxim Gun pinned down  under fire, another 'action' shot. 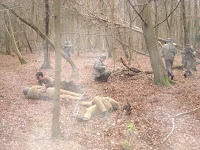 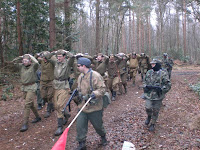 The Soviets trudge off to the POW cage. 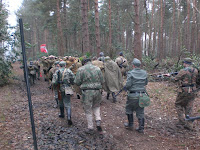 And an uncertain future. 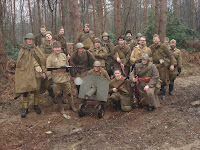 Heroic defenders of the motherland. 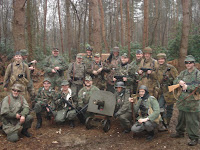