One of the highlights of my year is generally the January WW2 airsoft game the 34th Infantry group organise at their site near Tamworth. It is the ideal thing to blow away the winter cobwebs and the weather has usually been kind. This  game was the latest scenario in their long running Italian Front campaign, and featured less stand-up fighting and rather more recce and demolition missions than usual.

There was much excitement with the prospect of snow in the air, but in the event there was just a heavy dusting of frostt and it was very, very cold. Still, an excuse to break out all the cold weather gear as I don't often get a chance to play a game in a greatcoat.

My camera battery died so the photos below are all those taken by Pedro, who has an excellent Facebook site: Photos by Pedro 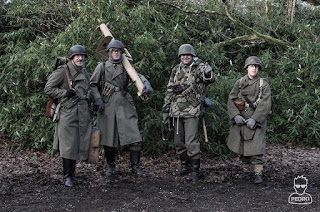 Our somewhat depleted section (it was a small game anyway and you always get dropouts). This was the first outing for the panzerschreck (built by Chef on the left). It is a repro one fitted with a firing adaptor for the TAG CO2 rifled shells, a two man job to load and fire, so quite realistic really. It is made of steel and very heavy, perhaps not the ideal thing for lugging through the undergrowth. 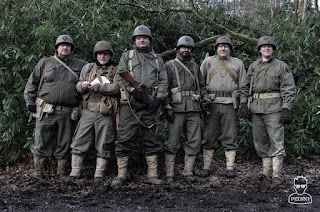 Well at least we got to wear wool uniforms, the poor old Americans (here a squad from the 34th) only had their freezing cold cotton ones. I suspect some thermal base layers under there... 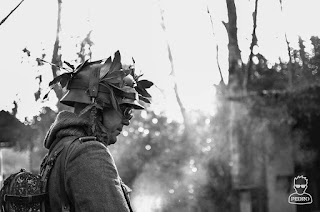 Although I've used an old inner tube on my German helmet for years, I finally picked up an original breadbag strap and had a go at doing a foliage frame using the strap. It actually worked quite well and was a lot more secure than the inner tube which has a tendency to slip off on helmets which aren't treated with aluminium oxide to roughen the outside. 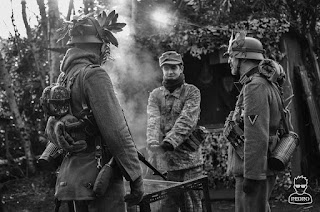 Despite the cold, by the afternoon we were  sweating buckets in our greatcoats so off they came, but the fire at base was very welcome! A good shot of my A-frame setup, the most useless piece of load bearing equipment ever invented. 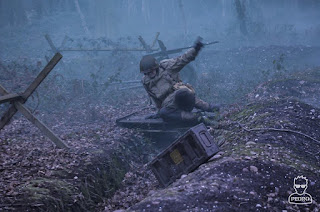 Airsoft games generally look a bit rubbish in photos, particularly 'action' shots, but this one was quite good I thought. Taken during the final assault on the German supply base, and the still, cold air meant the air was thick with smoke, which hung around a fair bit.

It was a successful day out and the Panzerschrek appeared to work, as we successfully engaged three vehicles with it. Unfortunately none of the frangible rounds exploded, and it may have been a bit too cold for the gas propellant (which arms them as they are fired) so we had to demolish them with conventional flash bangs instead. First game of 2016 and a good start to the year, next off to the Reichswald in February.