John has been working on some RCW rules which started life as a variant of 'Restless Revolutionaries' (which we rather played to death, back in the day) but was more inspired by our more recent outings with Neil Thomas.  Bases are companies/squadrons/batteries and units are battalions. The ground scale is a little mysterious, but rifle range is 12" and MGs 18", so similar to AK47.

For this particular outing, what used to be the Imperial German 8th Armee in the Baltic States has been sponsored by the Allies to halt the inevitable march of Socialism in Latvia. At this stage most of the actual Latvians are in the Red Army, while the 'free Latvian' forces are almost entirely Germans, including some Freikorps types. Lovely!

Tim G and Jerry took the wicked Bolsheviks, whilst myself and Tim C took the even more wicked Freikorps. Our mission being to push a regiment off the far table edge. 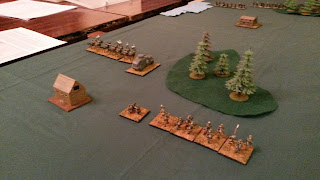 My own command was the army vanguard: a battalion of Stormtroops, a cavalry regiment, battery of machineguns and a platoon or Erhardt armoured cars on their very first tabletop outing. All toys are Johsn 15mm WW1 and RCW collection. Here are my chaps vanguarding away up the left flank. 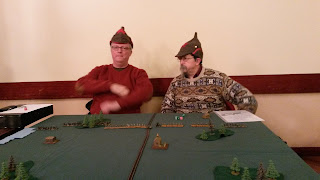 Meanwhile the Red Army, commanded by these two sinister (and somewhat blurry) types, unimaginatively lined up their entire force from one side of the table to the other and marched slowly forwards. Comrade Commander Tims directives had to be agreed by Comrade Commissar Jerry. 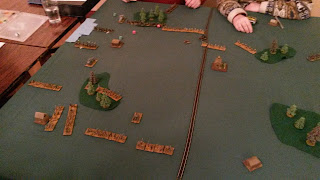 The German Army adopted all sorts of exciting formations whilst the Red Army stuck to its lines. Keen eyed readers may notice an absence of German troops east of the railway line. 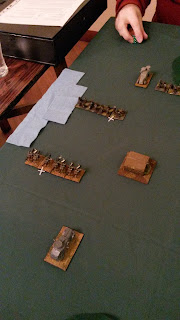 After a brief exchange of small arms fire (evidenced by the little white crosses) I decided to try out the close combat rules by conducting a frontal charge with my cavalry against an enemy infantry battalion. These proved to be extremely bloody, the infantry were wiped out and my cavalry took heavy losses. 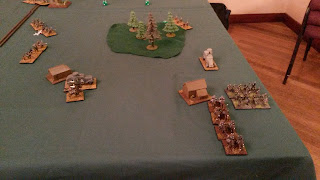 Sadly the Reds had also noticed the absence of troops on our right flank and duly marched off the table clinching victory, despite the Erhardt and remains of my cavalry moving to intercept. Our utter defeat was even more embarrasing as the overall combat value of the German force was almost twice that of the Reds, and we just completely bungled it.

This was great fun and the only real issues seemed to be the somewhat anomalous close combat results. The morale rules in particular worked very well and produce a nice ebb and flow. John has drafted some amendments to the close combat rules to fit in better with period experience, and I'll look forwards to trying them out.

Unusually the Erhardt survived its first battle unscathed, so a victory of sorts?