As usual the Sheffield Wargames Club ran an extended games day during the Christmas break. I rolled up around 2.15 and was amazed to find the hall a hive of activity already. With my usual group of reprobates we managed to play a couple of toy soldier games and a couple of cards games, with a brief break for pie and mushy peas, topped off by Sarahs excellent sponge cake. 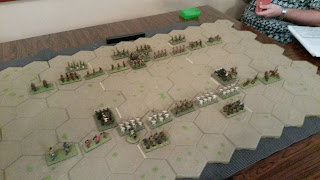 Command and Colours Ancients, this one put on by Tim and covering the Syrian revolt led by Cyrus teh Great against their Medean overloads. 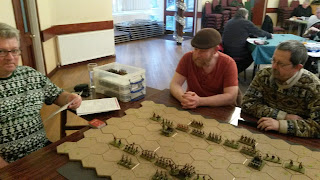 Nick and Jerry take on the Medeans while Tim supervises. 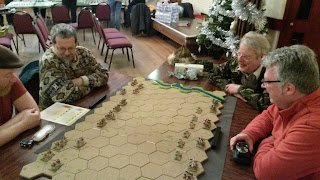 Later on,wind forward a few hundred years to the Punic Wars, this one with my 20mm figures. The Battle of the Ticinus River. Jerry and Nick get to command Hannibal, Hasdrubal et al while Tim and John get Publius Scipio. 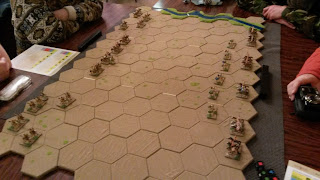 An interesting engagement as it was fought almost exclusively between cavalry and light troops. Romans on the right, Velites out in front, support by cavalry. Carthaginians on the left, Cartho heavy cavalry flanked by swarms of Numidians.

Another major activity going on was a huge game of Waterloo, being played using 'Blucher' (so brigade bases). 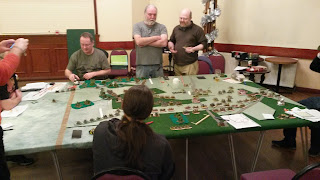 Napoleon confers with Jerome, while Ney fiddles with his toys. 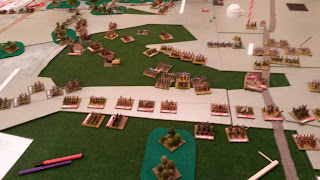 The crisis of the battle, massive French attacks either side of La Haye Sainte as viewed from the Mont St Jean ridge. Meanwhile the Prussians pour on from the flank.

A very enjoyable afternoon/evenings gaming and one of the highlights of the year.