John has worked up a new version of his old Blitzspiel rules, now aimed at company level infantry combat with a more generous ground scale, incorporating many of the ideas from Platoon Commanders War. He brought them along to try out along with his new 15mm Russians. 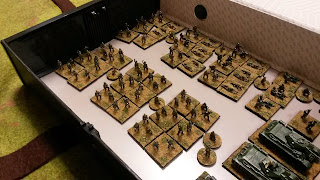 The shiny new Russians. In this case an SMG company and a rifle company, plus a few T34s. Tim and I took the Russians. We were tasked with liberating a village occupied by the fascist oppressors. 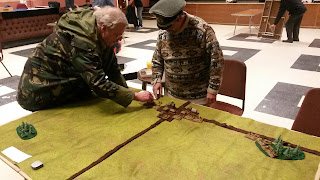 Jerry took the Germans, a rifle company supported by a section of tripod MG42s and a pair of Pak 40. They had to defend the village until nightfall. 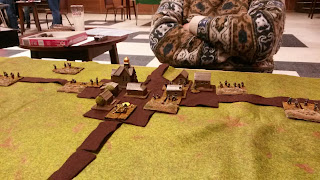 The German set up a series of triangular platoon positions to enable mutually supporting MG fire. The ground scale is 6" = 100 yards, so each dug in section is roughly 100 yards apart. 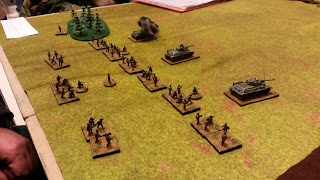 The SMG company advanced in two echelons, preceded by the tanks. One tank immediately fell to a concealed Pak 40. 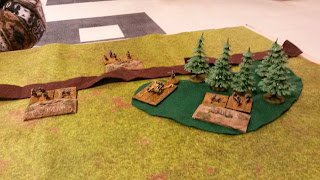 The northerly German Infantry and one of the Paks. 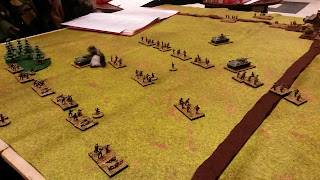 The Russians pushed on, and the rifle company came on, also in two echelons. Each echelon kept one tactical bound apart to minimise the effects of the German MG fire.  They also rather neatly blocked each others lines of fire! Over on the right flank (and off camera) a Russian MG platoon is providing covering fire. 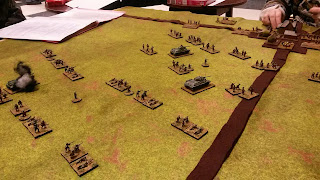 The first line closed to within 150 yards of the defenders as the T34s engaged the AT guns. The Maxims were masked at this point. 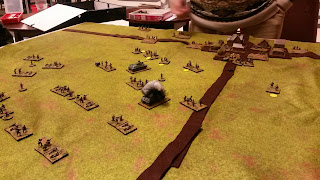 The Germans held their fire until the last minute and a hail of defensive small arms thinned out the first Russian wave and pinned the survivors. Meanwhile another T34 blew up. Ouch. 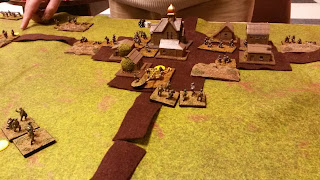 Return fire from the second line disrupted the defences and the second echelon pressed on in into the village, assaulting an AT gun which had been pinned by HE fire. 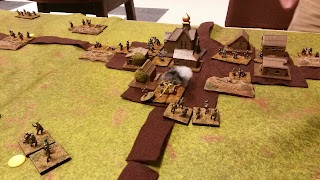 A desperate German counter attack was beaten off and the German gun captured by the elated SMG troops, establishing a foothold in the town.

At that point we ran out of time, which was a shame as it would have been interesting to fight more of the infantry battle. We declared both sides to have won as the Russians had captured (some) of the village and the Germns held the rest!

The game rattled along well though considering the number of troops involved, and I have a smaller scenario we can try out involving British troops. It was interesting using a smaller ground scale than Platoon Commanders War as it gave infantry more chance to sneak up on things, but one suggestion I made to John was increasing the beaten zone of tripod MGs. We'll try that next time.