I acquired copies of both volumes of Bob Cordery's 'Portable Wargame' books for Christmas, and put on a game at the club using the supplied WW2 scenario 'KG Fredrickson'. The rules were largely as written, but I borrowed a fellow bloggers idea about penalising tanks in woods/BUAs and I rated tanks as 'cataphracts' against infantry in the open as they seemed rather weak in close combat.

For the game we used the standard IGOUGO turn sequence rolling for initative, strength points and exhaustion levels rather than the sudden death combat system.

We played it using 15mm figures on Hexon terrain. Any errors, omissions or rules misinterpretations are entirely mine. 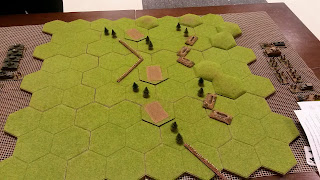 The battlefield from the North. The ploughed fields are minefields. 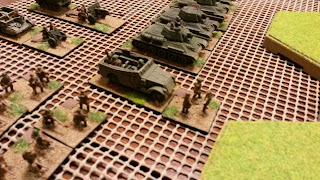 The Russians deployed a Mechanised Brigade, and I gave their commander my shiny new M3 Scout Car to ride in. 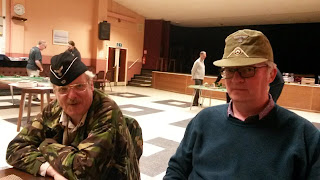 The Germans had the best hats. 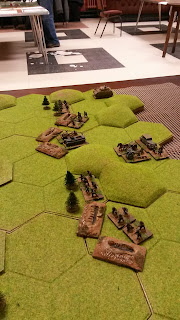 And deployed their troops to defend the fortifications. The panzer company was kept in reserve. I'd  modified the OB to replace the German MG units with normal rifle companies. 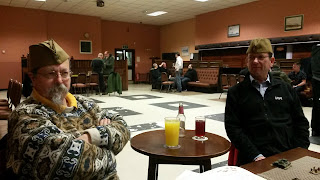 The Russians had more practical hats. 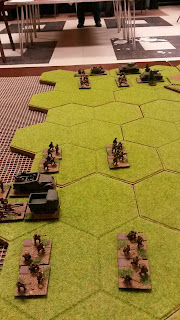 They marched on with their rifle battalions in two echelons and two companies of T34s supporting the infantry in the extreme South. The remaining T34s were kept in reserve as Jerry had a cunning plan. 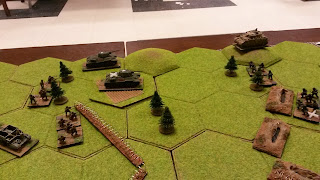 Exchanges of fire took place in the south as the Russians negotiated the obstacles. The panzers moved up to engage. 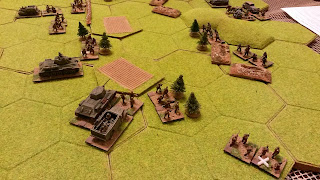 Having attracted the German reserves, the remaining T34s plus infantry worked their way around the northen flank. 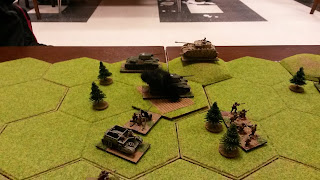 The Pz IVs launched a heroic attack as one of the T34s succumbed to AT fire. 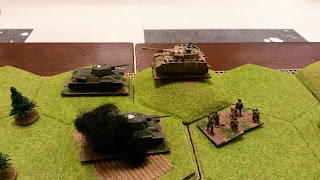 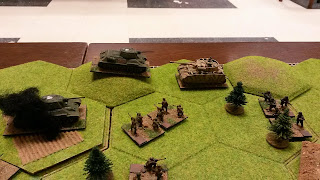 Pushing them back again. 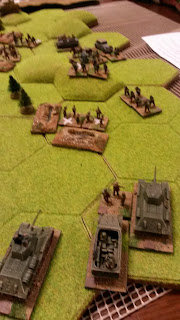 On the right the Russians pushed the German infantry out of their trenches. 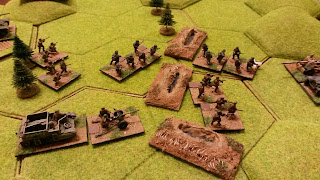 In the centre the Russians also broke into the German position, closely supported by their AT company. 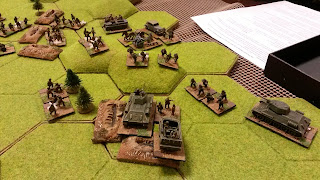 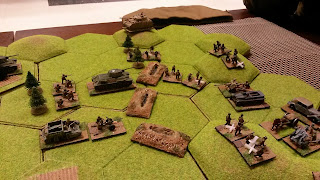 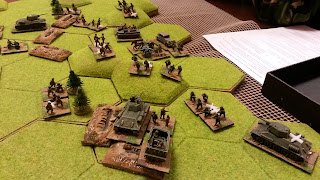 The German infantry heroically held off the massed tank assault (which tbh seemed a bit of an odd result) as the Russians reached their exhaustion point and the game ended.

At game end, both sides claimed victory. The Germans had prevented a breakthrough before nightfall, and the Russians had cleared away the obstacles and captured all the German trenches.

This was an enjoyable game and some of the mechanism worked very well, particularly the option to retreat or take a hit, which coupled with the exhaustion rules produced a genuine tactical decision as opposed to so many games which have artificial decisions related to game mechanics. We did get  a bit confused about the turn sequence and how retreats affected firing for elements hit in the artillery phase. The way we played it seemed to produce indestructible towed guns which fired every turn, so I need to have a think about that.

The close combat was problematic, ranged fire proved to be far more dangerous, and it just didn't feel right for a twentieth century setting. I suspect the nineteenth century roots of the game are showing here. There was also double counting by adjusting SP for quality and adjusting the saving throw for quality, which made elite units far too good. Nothing which isn't fixable though, and as there is such a good game buried in their, I'm determined to make it work. More meat than One Hour Wargames, but less complexity than Command Decision!