John is steadily working his way through his Peninsular War scenario book, and this time we got to do Talavera. Woo  hoo, result! I've never done Talavera before, although I've done quite a few of the other big Peninsular battles. This one makes me think of the wargames in the old Callan film.

As ever, we played it with Johns 15mm toys using Brown Bess. As this was  a big battle, the units represented divisions, and I volunteered for the role of Cuesta so I could wear my Really Big Bicorne. 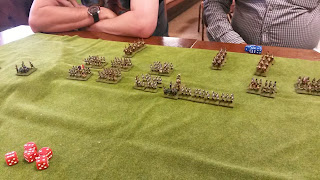 The Frenchies line up over the way. There seem to be an awful lot of them, and not much sign of the historical 'piecemeal attacks' this looks more like Wagram! 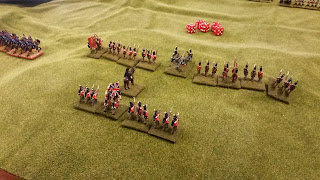 Wellesly and the British hold the centre. 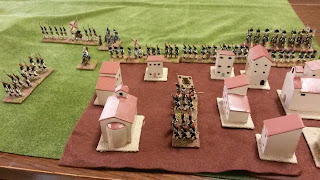 While very sensibly my chaps lurk in and around Talavera itself. 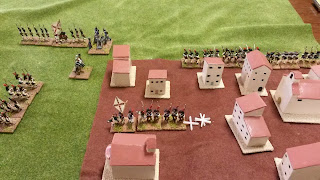 Ooer, what is this? Some of my chaps run away at the first shot! There were some special rules covering the the unreliability of the Spanish  in this battle (a special morale test the first time a unit was in action). I duly let off an army level musketry barrage at excessive range, and we were all suitably amused when some of the Spanish infantry ran away from their own shooting. Better to find out now than in the thick of the action I thought. 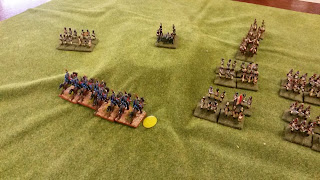 No such hesitation on the part of the Spanish light cavalry who head straight for some French guns who seem a bit short of support. The yellow marker indicates they haven't taken their 'special' morale test yet. 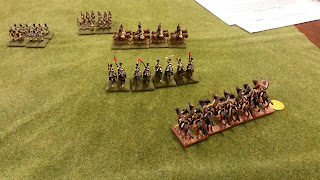 The other Spanish cavalry head for the French lancers. Might as well use them or lose them. 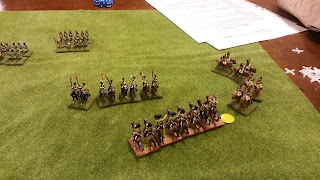 Some French dragoons pull a very dodgy looking flanking manouvre. They never taught us that in Seville. 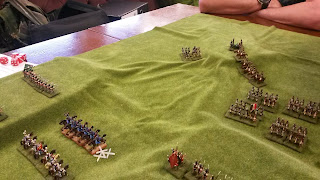 Sadly my cavalry on this flank turn tail, but not before throwing the French right into disarray by forcing infantry into square and making the French commit a cavalry division to drive them off. 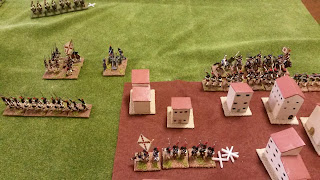 Over on the other flank, my chaps leg it too, pursued by the Lancers. Things could be going better. 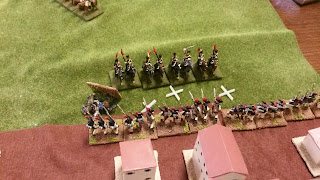 Cuesta rides over to help rally them, but is cut down in the melee as the Spanish cavalry are wiped out. It is probably for the best. 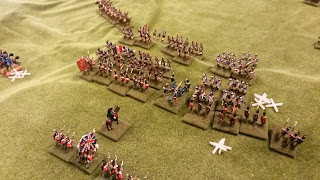 Meanwhile the French crash into the British line, suffering heavy losses in the process. 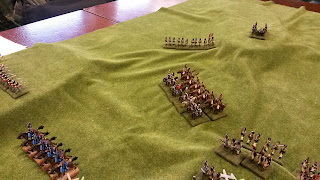 And the British light cavalry also take on the French. 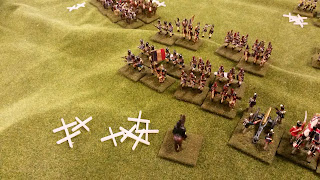 Although some French divisions are driven off in disarray, sadly the Guards break and Wellesleys flank is left hanging in the air. 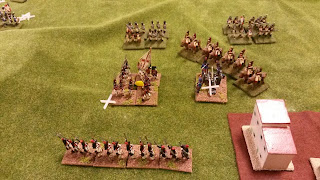 Meanwhile my chaps form square in the face of masses of French cavalry, which also proves to be a handy place for my gunners to hide. Unfortunately the cavalry have infantry support. 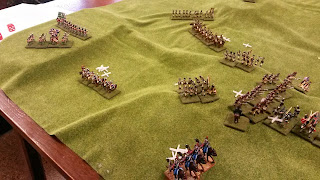 Things aren't looking too good over here, the British cavalry are routed and the French start to wheel around. The British troops holding the far end are looking rather isolated. 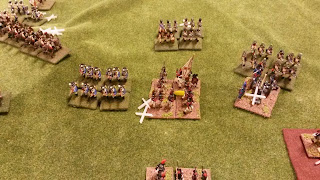 My squares proves to be extremely resiliant though, the morale bonus makes up for the increased vulnerability and they dish out death and destruction on all sides. Unfortunately they are effectively pinned in square now and will have to do or die in place. 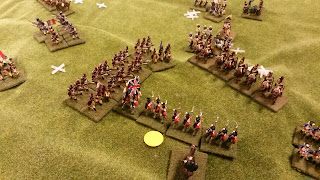 Things could be going better in the centre as the British are outflanked. 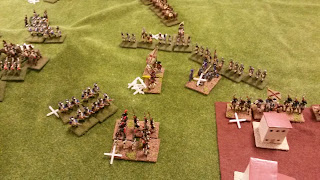 My lead square begins to collapse and the French get started on the next one. 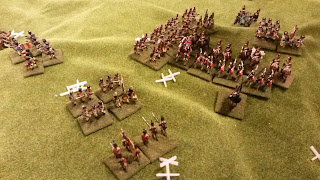 Up on the hill thought, the thin red line manages to stave the French off a bit longer. 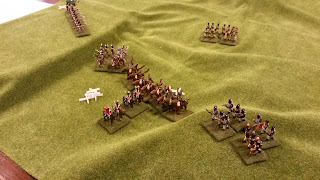 The left flank looks OK, shame about the huge hole in the centre! 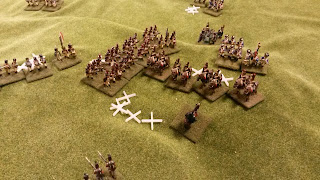 British resistance in the centre collapses and Wellesley is carried wounded from the field, and with that the day went to the Frenchies, 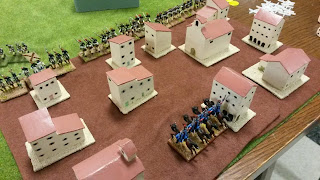 The Spanish are still hanging onto Talavera though, while the surviving Spanish light cavalry have a quick drink at a bar in town.  As the British have let us down, I suppose we'll have to withdraw overnight and come back and beat the Frenchies another day.

This was brilliant fun, and I really enjoyed role playing Cuesta. It perhaps wasn't the most greatest idea to give the British to our least experienced member, certainly not when faced with a flint eyed Tim C playing Marshal Victor, a veteran of the Napoleonic Wars if ever there was one. Well played to the French, and one we'll have to come back to and see if we can manage the historical result.