As it is 2018, there are number of significant 100th anniversaries of various WW1 battles which took place in 1918. One of these was the second Battle of the Marne, which featured a major German attack into the French lines (one of the last of the Kaiserschlacht offensives), and then a major counterattack by the French and US forces to push them back again.

As we were pressed for time at the club, I put together a representative engagement using One Hour Wargames. Rather than covering either of the big offensives I picked scenario 21, 'Fighting Retreat' to cover the German withdrawal back behind the Marne. I also wanted to try out a variant of Captain Kobolds combat variant: Instead of 15 hits, units only take six, and combat is resolved by units throwing one two or three D6 (corresponding to D6-2, D6 and D6+2 respectively). Units in the open are hit on 3+ and units in cover on 5+. The averages work out the same but there is less book-keeping and it is a bit less predictable. I also prefer the integrated treatment of cover in the firing results.. 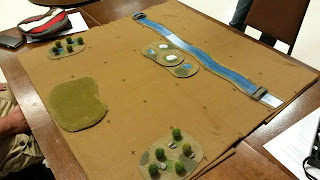 The battlefield from the Northwest. The Marne is in the distance crossed by two bridges, victory goes to whoever holds the hill at the end of the game. 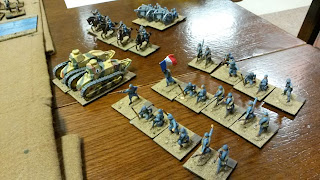 The French rolled up this rather grand force (after a bit of fudging), tanks, artillery, cavalry and three infantry. We were using my late war 20mm plastic figures, this being the first outing for my French cavalry. 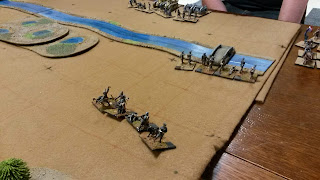 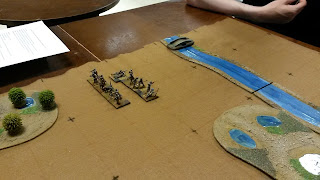 And two more in the north. 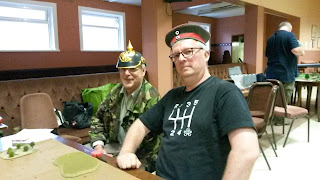 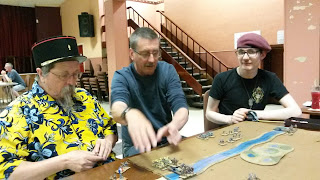 While the French are too distracted by their toys to look up for the lithograph. 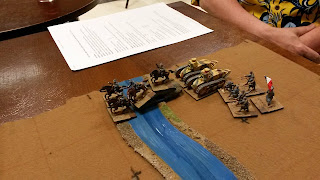 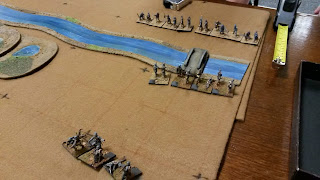 A standoff in the west. 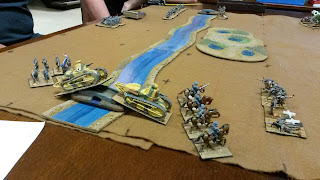 But over in the east, the French cavalry covered the river crossing. 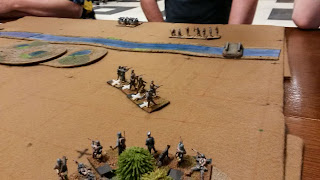 The Germans managed to destroy one of the French infantry units, but were shot up in turn., 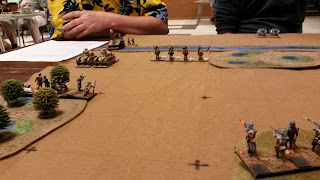 The German defenders of the critical hill watch the French deploy in the distance. 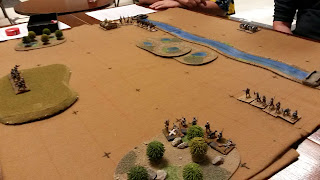 The damaged German infantry are destroyed and the remaining French march forward. 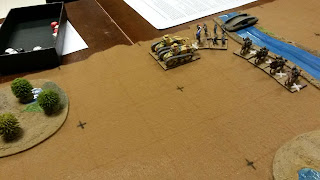 The French tanks clear the woods with gunfire while sustaining some damage themselves (the trench crossing rails proved very useful for holding casualty markers). 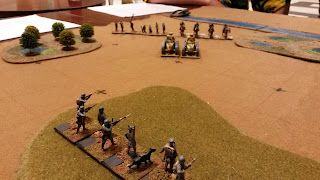 They then set off towards the central hill in a menacing manner. The Germans had very wisely withdrawn behind the crest. Eagle eyed readers will notice everyones favourite command stand, the officer with sword and loyal message dog. 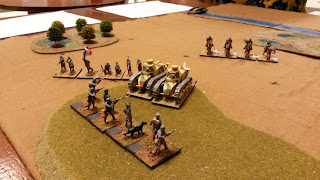 Sadly message dogs aren't much use against tanks. 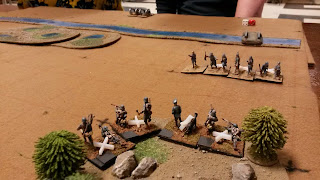 Over in the west the Germans held the French off. 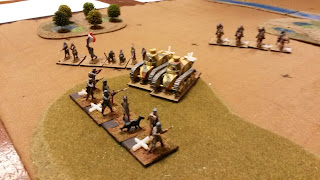 But things got a bit sticky on the hill. 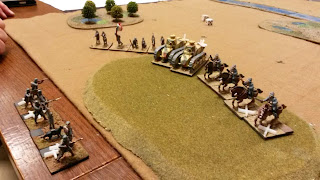 Down to their last hit, the Germans conceded defeat and pulled back as the French cavalry moved up.

There were only a couple of turns left so it ended up being a fairly close run thing. I suspect it would have been closer if shooting ranges weren't so long, and I am sorely tempted to reduce them to 9" (in my hex based version they are 8") as the long shooting ranges produce too much ganging up. I think the scenario capture the flavour of a fighting retreat and as ever, produced interesting command decisions on both sides despite the last few turns becoming a slug fest.

The new combat system worked very well though, people commented how much faster it was, partly as there were less hit markers to drag around and the dice throwing was more straightforward. It was also a bit more 'heroic' than the the very attritional standard system. It would be interesting to try it with the Ancients set.