Like many wargamers, I have a vague shopping list in my head of things I 'need' but can't actually be bothered to buy at outrageously inflated current retail prices. Available as a bargain however....

One such item on that list are a couple of M10s for my 15mm US forces. I had thought of buying some QRF ones, but imagine my delight when some unbuilt Battlefront M10s turned up on the club Bring n' Buy. 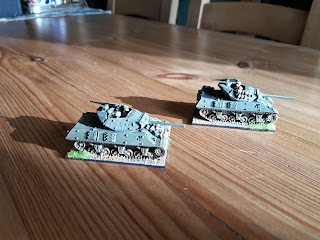 Here they are in all their glory, out looking for Tigers to blow up.

In fact they are horrible models, a real dogs dinner with resin bodies and turrets, the plastic track sprues from the BF Sherman models and a pile of scrap metal which on closer inspection turned out to be the crew, assorted stowage, turret counterweights and the all important gun barrels.

By the application of large amounts of blu tak and gel superglue I eventually got the monstrosities to stick together, and they then didn't look too bad. Dear me, give me plastic any day. One saving grace was that the Sherman sprues yielded some useful gun barrels and hatches for the spares box. 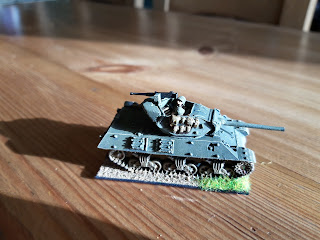 It was nice to have some stowage options included, so I adorned them with various tarpaulins etc. 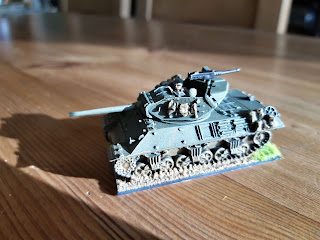 The hull and turret castings are well done with somewhat exaggerated raised detail, but good sharp lines which take a drybrush well.

I only did two crewmen in each, partly as it is nice to highlight the interior turret shell rack, and partly because some of the crew figures fell to bits as I tried to get them off the casting strip. Maybe the other guy is off to get some Coca Cola. 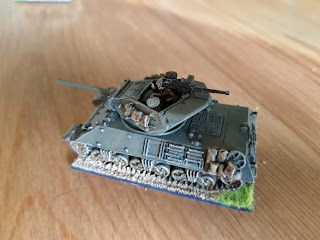 The deck detail looks good, and I really like the way the counterweights look like a separate bolt on to the turret (because they are). 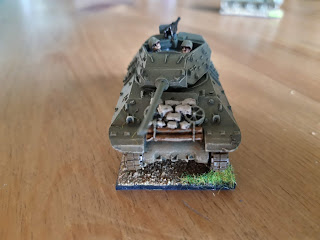 This one has a great pile of logs and sandbags on the front. I lightly filed the helmets down so they can, at a pinch, pass as RAC helmets on British crews. 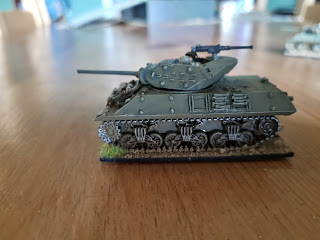 They sit well, although I made a mistake positioning the tracks  (the top edges should be more obscured). As they are rubber block tracks I only highlighted the outer edges with metal.

I did these in plain OD, as I've long given up putting lots of markings etc on vehicles. I'll do a few, but it just limits their flexibility. OD is also a tricky colour as it is so variable. I did these in Vallejo Russian Uniform over a dark grey primer base, then washed it with a thin wash/stain of Bronze Green. It came to OK I think and obviously the wash provides some shading. Otherwise I just did all the running gear and tracks in mud, and gave the whole thing a light drybrush of pale tan. The flesh on the crews and the brass shell casing also got a brown ink wash.

So there we go, a worthy addition to my sea of Olive Drab AFVs. They can passably serve with my US and British forces, and even serve as the handful (iirc 52) of M10s sent to the Russians. Interestingly the Russians made exactly the same complaint as the Allies, namely that sub units misused them as tanks and the crews suffered heavy casualty from shell splinters as a result.