Graham brought along a set of RPG rules I'd not heard of before, Dragon Warriors (?). It was a fairly standard D&D derivative, but unusual in that it was published in a series of novel format books and including scenarios as well as the rules, with a series of expansion introducing new character classes and missions. 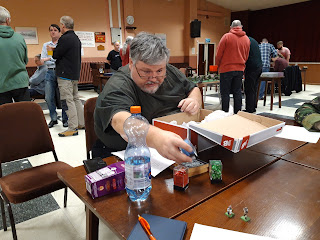 The great sorting out of funny dice and player sheets was very familiar. 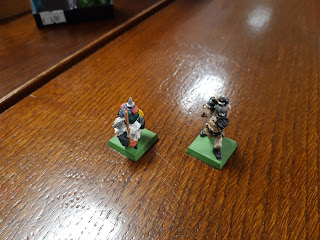 Here are my two brave adventurers.  Barbarian called Gundahar, and a Wizard called Slarty Bartfast. I never said I was imaginative. 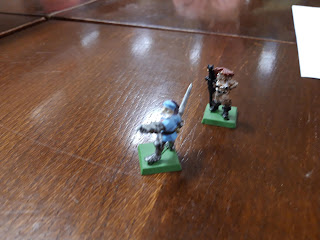 Tim had these two, a Knight and a female warrior. 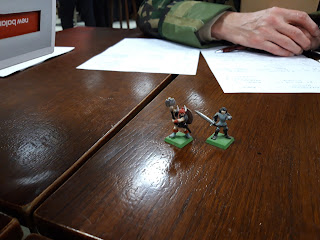 John also had a Knight and another Babarian. 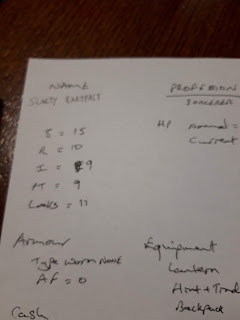 The character sheets were all familiar stuff, although the stats were slightly different to D&D, T&T or D20. Hilariously my wizard was rather dim with poor psionics, but was very strong. I did wonder if he had chosen the right career! 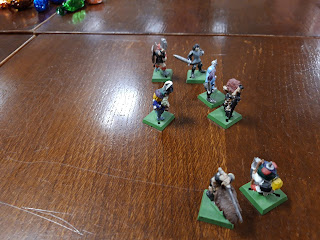 We started off in the inevitable village looking for a patron. My wizard entertained himself by challenging all comers to arm wrestling in the pub with his superhuman strength, while charging the villagers to heal minor ailments and putting on 'special' illusion shows for discerning and discreet punters to bring in some cash.

Eventually we met up with the local priest who had a tale to tell of hidden treasure and wicked fairies. 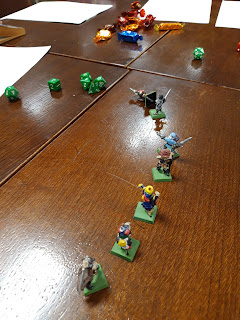 So off we went into the catacombs (you'll have to use you imagination here). The figure lying down indicates an unfortunate encounter with a poison gas booby trap. I bravely stayed at the back, maybe my wizard wasn't as dim as his stats said. 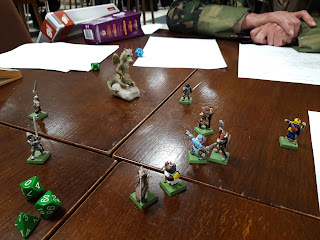 After various adventures we came across a rather large Dragon on an ever larger dragon hoard. Luckily for us, it didn't want to eat us all up, but instead engage in a riddle contest. 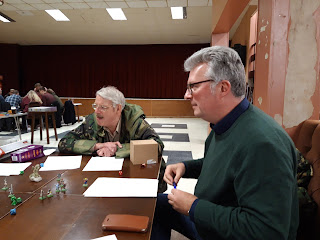 We put out best minds onto it (so not me). 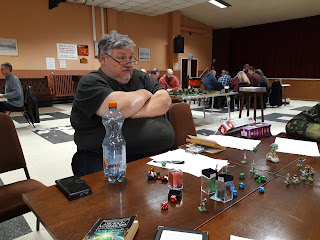 The GM was suitably unimpressed. The Dragon still didn't eat us up though, so that was good. 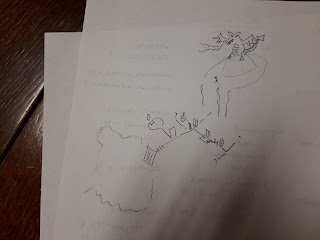 I recorded our route for posterity. When I was a teenager we used to do this stuff on graph paper in 5' increments, but I've obviously been playing too many computer games as this is a sort if wierd isometric view. I also got north and south mixed up!

Having survived our encounter with the dragon, we called it a day. It was actually a lot of fun, as RPGs are all about the people rather than the rules. John promised to introduce Graham to Challenges and Adventures at some point, for a very modern take on the RPG format.