In my post about the Battlefront M10s (here), astute readers may have wondered why I only built two, when the more modern BF offerings typically come in platoon sized boxes. Well, all can be revealed!

Another 'idle shopping list' item I've had for a while has been a couple of 15mm Achilles SP AT guns. Having  picked up a box of four Battlefront M10s at the Bring and Buy, I wondered if along with building two normal M10s, I could turn my hand to converting two of them into Achilles. My original plan had been to buy a couple from QRF. 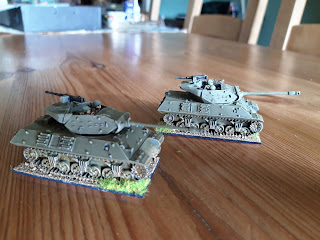 Here they are in all their splendour, so I obviously did manage it. 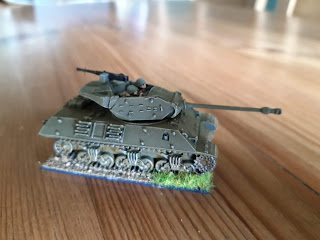 At first I was resigned to having to make the much rarer Achilles I with a normal M10 turret as I didn't fancy converting the counterweights. While rummaging around in the pile of scrap metal in the BF M10 box, much to my delight, I found a couple of the 'duck bill' turret counterweights. Achilles IIc here we come! I hadn't realised until I did some research that a lot of later M10s also had duck bill counterweights. The model itself was the usual BF horror with a mix of resin, plastic and metal parts which I ended up sticking together with liberal amounts of blu tak soaked in superglue. 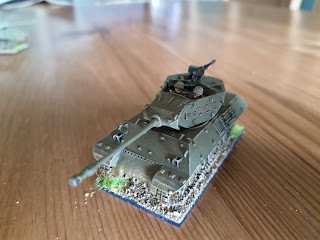 The major addition was the 17pdr gun barrels, which had a distinctive extra weight near the muzzle, and a collar when they entered the mantlet. Fortunately I had some spare 17pdr gun barrels left over  from PSC Shermans, and a blob of blu tak soaked in superglue gave a very passable impression of the mantlet collar when the gun was pushed into it and the excess welled out.

The only other thing was the extra counterweight on the gun barrel, which I made up out of a thin strip of electrical tape glued into place. The extra weight behind the muzzle brake is an important part of the 'look' of the thing. 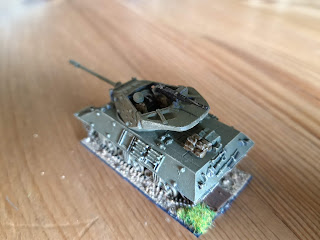 I used the supplied crew, although as with the M10s I only used two figures. Real Achilles crews seemed to wear a very motley collection of headgear, but the RAC helmet seemed quite popular so I just filed down the  M1 pots of the US crew figures into a passable approximation. I thought about converting the 76mm breech into a 17pdr breech, but I couldn't face dealing with the resin moulding so I left it alone. 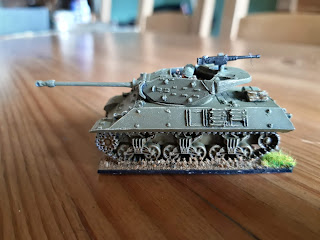 I think they look the part although the PSC gun barrels look a bit delicate compared withe clunky PSC mouldings. As with the M10s, I added some of the supplied stowage but in this case finished them in the late war British camo shade (SCC15) which started ut looking like US Olive Drab but faded fairly quickly to a greenish shade. Vallejo Russian uniform over a black base is a decent approximation. I should probably have washed them in bronze green too like the M10s and then lightened them up again to give the colour a bit of depth but I didn't bother. Instead they got the usual mud all over the tracks and running gear, and light drybrush of pale tan. I also didn't bother with any markings, the lower hull and mudguards were covered in mud in any case.