Another item on my vague wargames wishlist (well, not that vague, I have a spreadsheet) was a 15mm Wespe. You really can't have too much artillery for operational games, but I wasn't in a tearing hurry.

Anyway, sitting on the club Bring n' Buy was an assembled but unpainted BF Wespe for the princely sum of £1. It would have been rude to say no. 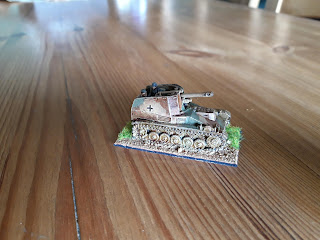 Here it is waiting to drop shells on some poor unfortunate. No assembly was required, but I did have to prise it off a base when it had been stuck down very firmly with hot glue. Unlike the horrible M10s, this was a more traditional BF resin vehicle with metal tracks and fittings. The crudity of the metal trackcasting really showed so I can see why they switched to plastic. 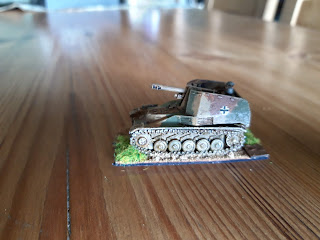 It sits OK though and looks the part. I researched various Wespe colour schemes but in the end just went with boring late war dunkelgelb and disruptive camo. Balkan crosses seem to be ubiquitous so I stuck a couple on as well. They make nice aiming marks. 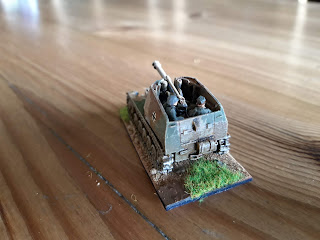 I made up a couple of crew figures. One is converted from a sitting PSC Panzergrenadier, the other started life as a Russian horse cart driver. Well, he's got a sidecap, jackboots and a tunic on so that'll do. I think crew are a must for SPGs, they look a bit silly otherwise. 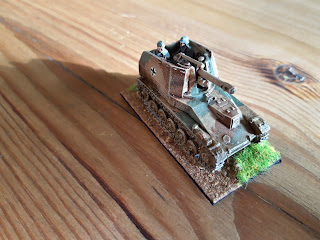 It has some nice sharp edges to pick up a drybrush.

For a quid you can't go wrong really, but it turned out very well. Into the storage box it goes, awaiting a game opportunity.