Inspired by my recent Achilles conversion, I thought I'd tackle another project I've had on the back burner for a while - building some medium AA guns for my 15mm Russians. Again, it is isn't exactly a high priority item, but some 85mm AA guns might come in useful for a range of things like medium AA in operational games or 85mm tank destroyer units in more tactical ones.

As I learned back in the 1970s when I did more plastic modelling, the hardest thing about scratch building artillery is the gun barrels, but fortunately those kind people at PSC provide different barrel options for their Zis 76mm guns, and the long 57s are close enough to 85mm guns without too much bodging around. The hard work was done, I really just needed to make some mounts. 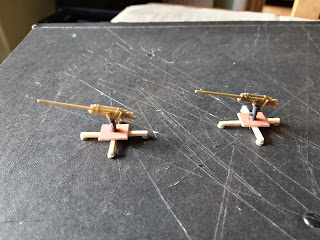 Here they are mid construction. I used a Russian 76mm AA gun from Irregulars Really Useful Gun range as a template for the gun mountings. 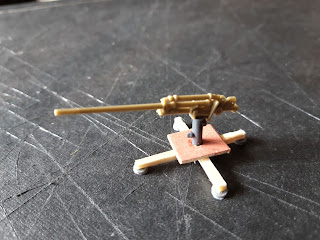 The gun platform is just a bit of card with the cruciform mount made out of matchsticks. (I said it was a bodge). The feet are slivers of plastic sprue, and the gun mount is also just piece of sprue with various nobbles left on it to stand in for dials etc. Sometimes it is just odd bits of external detail which make the impression - like the feet on the cruciform mount. 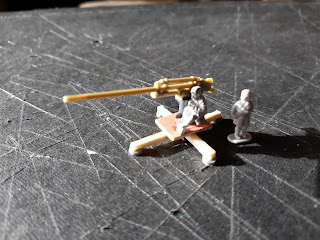 I added a gunners seat, also made our of sprue. This provided a home for one of my spare seated Russians. The standing figure is just there for scale. A fixed gunner makes the whole thing look a bit more gun-like I think. 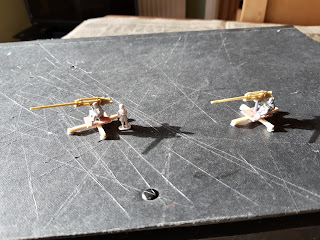 They look a bit more business like with their gunners. 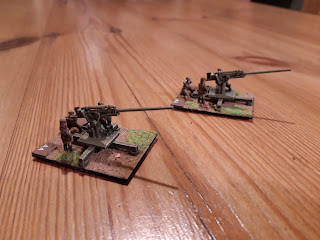 And here are the finished articles, painted and based up, which hides some of the imperfections! 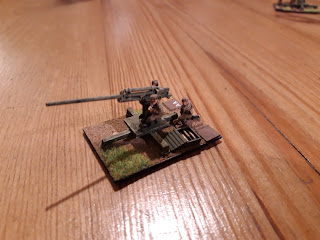 I just did them standard Russian Green, heavily highlighted with a lightened version (VJ 894 plus a big dollop of ochre), plus a couple of spare figures for the rest of the crew. I used some of the PSC women soldier figures as they were quite common as AA crew. 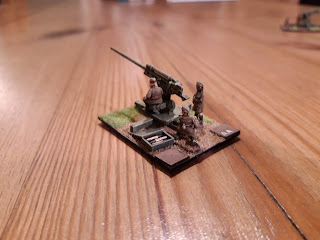 I also had some spare ammo crates, which add to the look of them I feel. The bases are my usual builders sand plus static grass with a couple of bits of magnabase should I feel the need to affix steel SP or status markers.

There we go, job done. Off into the Russian artillery box they go.